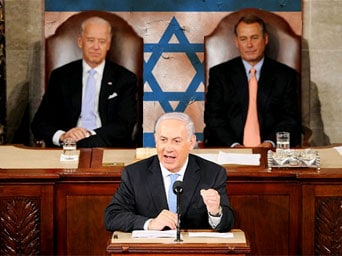 Israeli Prime Minister Benjamin Netanyahu spoke for approximately 50 minutes to a joint session of Congress on Tuesday. The politicians/sycophants greeted the Jewish leader with a four minute standing ovation along with another 26 standing ovations and 30 rounds of applause. They know who their master is!

Netanyahu made it clear to any independently thinking person that Obama was playing the world for a fool with his speech last Thursday implying Israel would have to go back to its 1967 borders. After meeting with Netanyahu Obama gave a speech at the conference of the overly powerful Israeli lobby group American Israel Public Affairs Committee. In that speech he made it so clear that his comments a few days earlier regarding Israel returning to its 1967 borders were so meaningless that Israeli politician Carmel Shama-Hacohen said, “President Obama gave an explicit, emphatic ‘no’ to the ’67 lines and Hamas [while expressing] boundless support for the State of Israel as a Jewish and a democratic state whose security is insured.”

Politicians are not patriots or revolutionaries; politicians are mere careerists. They will sellout anyone or anything if they believe it will help them further their career. The overwhelming vast majority of politicians in both parties and in Congress and the White House have sold out America and her people to Israel for the benefit of favorable media coverage and large financial donations. They know opposing Israel is in almost every case a death sentence to their career as a political whore.

Jewish groups tied to AIPAC have contributed over $10 million in just one election cycle in just federal elections. Add to this the very excessive Jewish influence in the media which has the power to make a politician appear any way it wants and it becomes painfully obvious why the politicians, who value their political careers over America, Americans and what is right and wrong, grovel at the feet of Israel and the Israeli lobby.

One great example of how the Jewish dominated  media in the U.S. shows Americans the world through Jewish/Israeli eyes is CNN’s Wolf Blitzer, aka Zev Barak. Wolf worked for the Jerusalem Post from 1973 through 1990. He even worked directly for AIPAC as an editor for their monthly Near East Report. Anyone who thinks such a zealot for Israel and Zionism as Wolf is capable of providing his viewing audience, the American public, with unbiased honest objective reporting needs to have their head examined.

The stomach-turning spectacle Congress made at  the feet of Netanyahu makes it very clear that instead of being an American Congress in the spirit of America’s founders, today’s Congress is a very kosher (kosher being used as it should be, in a very derogatory way) Congress. Just as the Biblical myth of kosher is nothing but a scam raking in millions of dollars for rabbis at the expense of Americans, so the kosher Congress is scamming Americans for their own political careers and for the Jewish state of Israel at the astronomical expense of America and Americans who pay for it through blood and treasure. The more we tolerate it the more politicians will continue to sacrifice our soldiers, Marines, airmen and sailors as well as our tax dollars on the alter of a greater Israel.