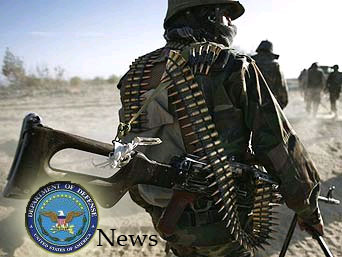 Musa was the senior Taliban leader in the district, officials said, and routinely targeted Afghan government officials and Afghan National Police in the district. At the time of his death, he was gathering groups of fighters, including suicide bombers, to conduct attacks against Afghan security forces.

The coalition force conducted the May 23 strike after receiving reports that identified Musa and several insurgents operating at a compound in the district. Besides Musa, two of his bodyguards and several other insurgent fighters were killed during the air strike.

No civilians were harmed as a result of the air strike, officials said.

— Also today, ISAF officials confirmed the capture of a Taliban facilitator during a security operation May 23 in Logar province’s Baraki Barak district. The facilitator assisted the insurgent network with improvised explosive devices and weapons for attacks against Afghan security forces.

— Officials confirmed today the capture of a Taliban leader during a security operation May 21 in Helmand province’s Nad’ Ali district. The leader was engaged in planning ambushes and other attacks on Afghan forces.

— Afghan and coalition forces air assaulted into Nuristan province’s Do-ab district to assess insurgent activity, officials said, following claims that the district was overrun by insurgents. The combined force came under small-arms fire upon landing from an unknown number of insurgents. The force returned fire and called for close-air support, suppressing the enemy fire and killing more than 10 insurgents.

“We have seen the insurgent claims in the media, Col. Hans Bush, ISAF Joint Command spokesman, said. “Our Afghan and coalition forces are on the ground. There is some fighting; however, no indication at this time the district was ever overrun. The ground force commander continues to develop the situation on the ground.”

— In Balkh province’s Chimtal district, a combined Afghan and coalition security force detained two suspected insurgents while searching for a senior Taliban leader. The leader is the Taliban-appointed senior governing official for the province. He is the focal point for all operational direction and is involved in all stages of western Balkh operations.