Home Government Is Arab Spring Spreading to US Congressional Staffs? 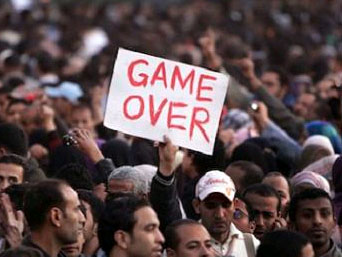 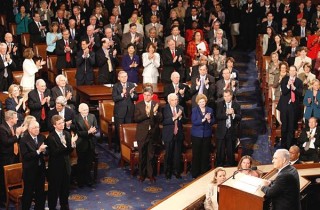 Some Congressional scholars, historians, and longtime observers of Congress are expressing dismay over what seems to have dramatically diminished the claimed, “World’s greatest deliberative body”

With 41 applause interruptions and 29 standing ovations, even with some appearing half-hearted and somewhat forced, Congress sent a message that the Legislative branch, increasingly* *under the control of a foreign power, and not the Executive branch, will continue to determine American policy toward Israel and the Middle East.

Millions of American voters were offended this week by the vulgar display on Capitol Hill which witnessed the annual rite of nearly 2/3’s of Members on Congress stumbling over one another at the annual AIPAC Conference in order to ingratiate themselves with their hosts and to protect their sinecures.

Equally nauseating to many was what some on Capitol Hill are calling “Congressional Black Tuesday” when they assert Congress cheapened its status in American and foreign eyes and fouled itself by taking the role of undignified cheerleaders for Israeli Prime Minister Netanyahu during his appearance before a joint session of Congress, an invitation normally reserved for august occasions and accomplished personages.

With 41 applause interruptions and 29 standing ovations, even with some appearing half-hearted and somewhat forced, Congress sent a message that the Legislative branch, increasingly* *under the control of a foreign power, and not the Executive branch, will continue to determine American policy toward Israel and the Middle East.

Some Congressional scholars, historians, and longtime observers of Congress are expressing dismay over what seems to have dramatically diminished the claimed, “World’s greatest deliberative body”.

Among those objecting to what they see as the corruption of Congress are an increasing number of the more than 18,000 Congressional staffers, many of whom work as many as 70 hours per week in their sometimes highly competitive jobs. Most Congressional staffers understand and respect the institution of Congress, know their Members politics, are aware of American interests in the Middle East and are fairly well informed on the Question of Palestine. 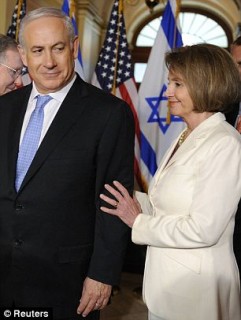 However, many are not happy and are beginning to rise up against what they are witnessing in their offices which is the increasing smothering of their erstwhile legislative aid roles by agents of Israel such as AIPAC. The latter are seen as increasingly preempting their roles and taking over some of their work by flooding their offices with position papers and then lobbying incessantly to see their ‘recommendations” implemented.

It is not always easy being a Congressional staffer and many have been and continue to be abused in various ways, some of which become public in an institution that values discretion and averting attention from their Members foibles. Yet working in Congress can be interesting and often rewarding work for those wanting to serve their constituents and help solve myriad problems on the local and federal level.

There is no shortage of access these days to friends and acquaintance who work on the Hill and whose work assignments include US Middle East policy.* *This longtime observer of Congress and former staffer has been somewhat pleasantly surprised by the strong reaction of some Congressional aides to last week’s events on the Hill and the rapid changes happening across the Middle East.

Congressional staff reactions to the Obama and Netanyahu AIPAC speeches and particularly the Israeli PM’s speech to Congress is strong and leads to the tentative conclusion that the effects the Arab Spring are being felt in both Houses of Congress as well as numerous support agencies such as the Congressional Research Service of the Library of Congress.

Many House and Senate staffers identify with those of similar age who have taken to the streets across the Middle East*,* who are thought of as courageous, smart and reasonable. They also understand that the Arab Awakening of 2011 is an historic game changer and they are often deeply sympathetic and supportive. Perhaps because of their knowledge of the issues, they express abhorrence to the Zionist falsehoods and disinformation that comes from AIPAC offices at the bottom of Capitol Hill and some of which were repeated by Netanyahu in their workplace.

Virtually all Congressional staffers who objected to Netanyahu’s appearance before Congress expressed rejection of his following assertions as ludicrously false:

*How Netanyahu received his “speech of a lifetime” ovations*

Two staffers who work with the House Foreign Affairs Committee and who know the issue of Palestine very well and also how AIPAC operates on the Hill explained to this observer how Netanyahu’s “speech of a lifetime” was organized by AIPAC.

Firstly, orders were issued that nothing was to be left to chance and they essentially succeeded, but for the protesting slogans shouted by Rae Abileah before AIPAC undercover security tackled her and she ended up in the hospital, groped, injured and under arrest. 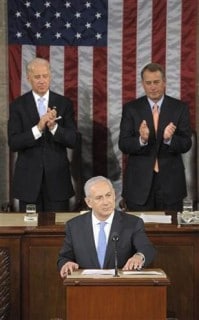 “Here is how Bibi got his “spontaneous” applause”, one and then the other explained. “AIPAC, as usual with visiting Israeli officials, edited his speech for most favorable local consumption. Marks were made at the end of intended applause lines for Bibi to highlight them verbally. Key Members such as Eric Cantor (R-VA), Steny Hoyer (D-MD), Senator Charles Schumer (D-NY) and Harry Reid (D-NV) were designated as floor leaders and were seated in strategic locations in the Chamber. Once Bibi began his speech the floor leaders would leap up at the indicated cue phrases and begin to applaud enthusiastically. Quite naturally, others would follow either not wanting to appear impolite or to stand out and be noticed as not showing proper support for Israel and its Prime Minister.

“In addition, AIPAC staffers who prowl congressional offices daily, let it be known that videos of the Members listening to Bibi would be kept on file and insinuated that how the Member’s performed during his speech to Congress would be taken into consideration when planning this summer’s Jewish fundraising events.

One aide, who supports his boss’s “moderately pro-Palestinian positions”, defended his applause for Netanyahu with these words: “Look, my guy could not just sit there and be conspicuous. Of course he resents being forced to fake support for Israel’s insane policies that he believes harms our country. Believe me*,* many Members feel like him and many Hill staffers are disgusted by what we see. But the guy needs to keep his job to work on other issues like protecting Medicare and stopping home foreclosures. Plus not many of our constituents probably even watched him grovel on TV so it was kind of a freebie for us. What would you have done?”

A surprising number of Congressional staffers explain that they feel they are stigmatized abroad and particularly in the Middle East as being part of the Israel lobby when they are not. One staffer explained: “This sounds arrogant but we who work in Congress know this subject much better than the general American public and when you understand the history of Palestine and its takeover by Europeans and the continuing ethnic cleansing of the rightful owners of the land, how do you think we feel? We feel the same as the Palestinians refugees spread all around the World feel. We* *are human beings too. Arab and foreign media often lump us with the Members of Congress, whereas in reality many of us are working for change.”

One lady, whose job it is to summarize and update Arab-Israeli conflict developments for her boss who is a Senator from the Midwest explained that “sometimes AIPAC sees what I write and will contact and challenge me on my work that should be between me and my boss. Everyone knows that Members of Congress are regularly pressured and targeted by AIPAC. You should know that dozens of staffers have been fired from their jobs on the Hill during the 15 years I have been here. I may be next.” And then she added, “But until that day comes I will continue to support the Palestinian cause and work to change our foreign policy and see that it’s made in the USA and not in Tel Aviv.”

Note:  Staffers could not be identified because of the sensitivity of the issue.

Franklin Lamb, is doing research in Lebanon and can be contacted c/o [email protected]. More from the author