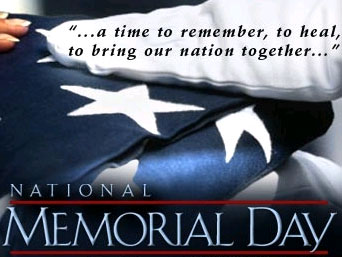 WASHINGTON – From parades to somber ceremonies and moments of silence, on Memorial Day, Monday, May 30, Americans will honor the sacrifices of military men and women who paid the ultimate price in their service to our nation.

“The fallen warriors we honor on Memorial Day cherished liberty and freedom enough to lay down their lives to preserve our way of life,” said Secretary of Veterans Affairs Eric K. Shinseki. “We owe them eternal gratitude and we must pass those sentiments on to future generations.”

The Department of Veterans Affairs (VA) will continue a tradition of hosting ceremonies at its national cemeteries and other facilities nationwide. Many of the programs are the centerpiece of Memorial Day events in their communities, honoring deceased Veterans and military members.

Secretary Shinseki will deliver the keynote address at a Memorial Day ceremony at Fort Richardson National Cemetery in Alaska, emphasizing VA’s goal of improving service to Veterans in rural areas. VA’s Acting Under Secretary for Memorial Affairs, Steve Muro, will speak at the dedication of a new state Veterans cemetery in Newton, Miss. The Mississippi Veterans Memorial Cemetery was constructed with a VA grant of nearly $7 million. VA’s Assistant Secretary for Public and Intergovernmental Affairs, Tammy Duckworth, will lay a wreath at the National Memorial Cemetery of the Pacific, then speak at the Hawaii State Veterans Ceremony.

More than 100,000 people are expected to attend activities at VA’s national cemeteries, with color guards, readings, bands and choir performances. Events will honor more than one million men and women who died in military service during wartime, including more than 655,000 battle deaths.

This weekend, we turn our attention to those who have made the ultimate sacrifice in defense of our nation. On Memorial Day, we remember and honor those men and women. And while we observe Memorial Day only one day of the year, we must never forget their sacrifice, nor their families, the other 364 days of the year.

In honor of Memorial Day, we have posted a special photo album tribute on Facebook. Be sure to check it out, and feel free to send in photos that you feel best represent Memorial Day.

Next week, our hearings resume, including a hearing on veterans unemployment and VA regional offices. Please visit Veterans.House.Gov for more information.

At Rock Island National Cemetery in Illinois, Rep. Bobby Schilling will present the son of a deceased World War I veteran with his father’s Silver Star certificate.

Riders with the Buffalo Soldier Motorcycle Club of Albuquerque, N.M., will arrive at Santa Fe National Cemetery May 28 to lay a wreath at its memorial recognizing the unknown soldiers, women and children who died at the nearby site of the Army’s Fort Craig in the late 1800s. Many of the Fort Craig remains, including Buffalo Soldiers, were reburied in 1976 at other military cemeteries. Three Buffalo Soldiers were later identified and laid to rest in marked graves at Santa Fe National Cemetery. Buffalo Soldiers served in African American regiments that were given that name by the Indian tribes they fought and impressed with their bravery.

On May 29, at Riverside National Cemetery in Southern California –VA’s busiest — volunteers will read aloud the names of more than 5,000 people who were buried there since last year’s Memorial Day.

Memorial Day was originally called Decoration Day when the tradition of decorating Civil War graves began in 1866. It still brings loved ones to the graves of the deceased, often with flowers as grave decorations. To honor Veterans buried in national cemeteries, VA staff and volunteers typically place American flags — either individual small ones on each grave, usually placed by volunteers, or “avenues of flags” flanking both sides of the cemetery main entrance road. Often these flags are the burial flags donated by next of kin of Veterans buried in the cemetery.

For the dates and times of Memorial Day weekend programs at VA national cemeteries, visit www.cem.va.gov.

“Consumers are becoming savvier in making their purchases,” said Shane Hu, founder of Uberi.com. “To further push the purchasing power of each dollar, we show our readers exactly what to do at Uberi.com. Our readers can find incredible deals from a new grill to a fantastic bargain on a high-end laptop. We feature products from reputable retailers to ensure a hassle-free shopping experience. In addition, this is not just about saving money. It’s the bragging rights too!” Uberi.com also features an Amazon Free Shipping Filler where readers can enter the amount needed to qualify for free shipping. Other features include a Coupon Code search and Amazon Discount Table. in our site amazon coupon code free shipping