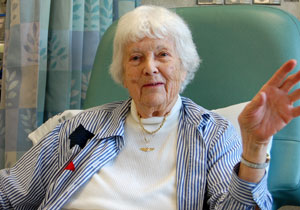 WII Women Air Force Service Pilot (WASP) 1st Lt. Elaine Harmon didn’t join the military for recognition but she certainly earned it.  Harmon was one of the 1,074 women pilots who flew non-combat missions in the U.S.  in order to free their male counterparts for overseas combat missions.

She knew the WASPS were trailblazers.  “It was a man’s world, but we were doing what was needed for the war effort,” Harmon said. “My mother was dead set against it.”

“The Army Air Corps kept us a secret.  They didn’t want the enemy to know the country was so desperate for pilots that they were hiring women,” said 92 year-old Harmon.

Harmon, who receives her health care at the Washington DC VA Medical Center (DCVAMC) said the WASPS were not granted Veteran status until 1977 even though they performed vital duties such as ferrying aircraft from the factories to military bases, towing targets for gunnery practice, flying cargo and serving as flight instructors.  They were considered civilians.  If a WASP was killed while serving, she did not receive a military funeral and her family had to incur the expense of bringing their daughters’ remains home.

When the WASPS were deactivated, their records were locked away for 30 years. When the Air Force Academy began admitting females into the pilot training program in 1976, the media published stories about how the new young female cadets who would soon be the “first female Air Force pilots”. The WASPS knew they had to come together to set the record straight. They petitioned Congress and the injustices were corrected when WASPS were awarded Veterans’ benefits in 1977.

Although slow in coming, the women are getting the recognition they deserve. In 2009, President Obama signed a bill into law awarding the Congressional Gold Medal to the WASPS.

All the efforts for recognition were worth it, says Harmon. “We just wanted to make sure these women for forgotten.”