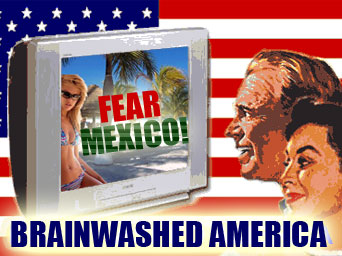 Here we go again…..it’s like a daily ritual with the USA mainstream media.  Today’s fake reality show episode comes to us from MSNBC with the omnious title “Time to say adios to Mexico travel?”.

In this paranoid fearmongering post, they take a poll asking “Would you visit Mexico given the worsening violence in some areas?”.  The results are ugly and telling.

Eighty-Four percent (84%) of their readers chimed in shaking and quivering pushing that keyboard with an empahtic NO!   I am sure if the button read NO F&#$ING WAY, that would be even more popular cause we’re dealing hysteria here folks.

How do I know?  LOL!  Because I have been living and travling all over Mexico for the past 12 years and that’s how I know and my wife of 26 years is Mexican.

For those of you 84 percenters, it’s called first hand knowledge and experience. Is that more credible than idiot pawn reporters working and getting paid by mainstream media living in the USA?  What do you think?  Yes, think!

Even more funny is that there are over 1,000,000 Americans living in Mexico who are laughing with me at this bullshit.   Because Mexico is such a wonderful place to live, work, and travel, most of us get pissed off when hear this complete and utter bullshit over and over from US main stream media.  That’s the first reaction.   But since this war on Mexico has been going on for years now, after a while, we just start to realize that the USA is just neurotic, period!   No hope!

After we get passed this accpetance, then we start to think…..geez us, maybe they should build that wall so we can keep this 84% out of Mexico.  They have no clue on how stupid they sound when they try to talk about something they know nothing about.   Worse, they are convinced that they live in the best most free country in the world even though there is NO evidence in 2011 that supports this bullshit.

USA # 1 right?  Yeah, keep yelling it until you believe it with all your heart and then get your ass handed to you by the facists in Washington DC who control every aspect of your life.  This is not 1950s America folks, this is Gattaca 2011.

I mean, we are talking about Mexico here; great weather, beautiful beaches, gorgeous señoritas, awesome and rich culture, friendly people with 1950’s American family values, and a heart that beats happy all day and night.  No wars except the fake Drug War that the USA just loves to keep alive.

For 111,000,000 Mexicans, the war is virtually a non-issue.  It’s just not in their face.  Now, if you happen to be in the “selling drugs to sick Americans biz”, then, yes, you’d see it….everyday!  No doubt about it. But in reality for most everyday Mexicans, this place is safer than most places on the planet.

Do you remember when kids used to walk down main street without fear?  Yeah, I bet you do…..well in Mexico, they don’t wish this….this is how it is. The only place that have a high level of paranoia are in Juarez, a small city bordering Texas, and Mexico City with its over 25 million people.

In Juarez, the gangs are fighting to see who can sell drugs to those who demand them in the USA.  The profits are so big that’s it’s out of control there.  No question about it.

And in Mexico City, hey, there over 25 million people living there.  What do you think it’s going to be?   Do you walk around New York City with your head in the clouds?  Come on!  You need to be vigilant in any major metropolitian area.  That’s normal.  So save the stupid comments okay!  I am talking about all of Mexico and not just Juarez or Mexico City.   Heck, do you idiots travel to downtown Detroit for your vacation?  Get real!  Geez us people!  Come on!

Anyway, yeah Mexico’s has more poverty than the USA….Opps!  Scratch that!  I was looking at 1998 stats!  Opps!  Mexico “used” to have more poverty than the USA.  I mean given the complete USA meltdown over the last 10 years, believe me Mexicans are way more wealthy then the indebted enslaved brow beaten servants that the USA tries to call it’s middle class.

Heck my neighbor who lives in a colorful blue 500 sq. ft shack making $ 50 a week at the local fish plant is more wealthy than most Americans.  At least she owns her own house!  That’s right!  Free and clear and her property tax is just $ 150 a year.  Yep!  That’s it.   She don’t need no nuerotic BS about retiring when she’s 65 and some financial planning from a bankster who’s just going to rip her off.

And don’t get me started on healthcare in Mexico…..lets’ just say my daughter who is stuck in Dallas waiting in line at a doctors office with 50 others is begging to come to Mexico and get health care where doctors are trained to treat patients not insurance companies.  Yeah!  No waiting…..just go in and you can get 1 hour of face time with a GP, easy.   And for $ 25.   Not $ 500 for 10 minutes!

Anyway, the point is…..that all this bullshit about Mexico is fake made up BS from a determined US media who is aiming straight at the resort industry in Mexico.

And the truth is that this strategy is working.  Just like when they scared the crap out of Joe American with their WMD bullshit and their Osama Bin Laden terror alerts waving all those dangerous yellows, oranges, and reds at us.  All non-sense, yes!  But effective like no other!  Powerful stuff!

I mean, yeah, check it, I have a cousin Jethro who lives in Alabama. He has the stupid gall and arrogance to tell me how dangerous it is here in Mexico.  Yeah, go figure!  What a jerk!  I told him to take his stupid right wing sorry dumb ass and plant it back on his Fox Idiot News Channel and stay the heck over there with his face planted on the “news”.   This Joe-the Plumber moron deserves his ignorance for never questioning the sources of his “news” and “information”.

Of course, guaranteed, there will be 84% of you Jethro’s reading this who’ll side with my cousin and will have the stupidity to write lame ass comments here telling me how wrong I am and how right you  are!  You betcha!  Heck you can put money on it right now!  But to these fools I say “We got Osama Bin Laden, Yippee!”

But really, it’s not their brainwashed fault but the fault of their leadership who plays this game on them.  And that’s the truly sad and tragic part of this story.  Americans are the real losers here, not Mexico.  Very seriously, I can’t tell you how sad it makes us expats who know the truth because we actually live and see both sides.   It’s heartbreaking really.

Mexico has virtually accepted the fact that their fellow North American neighbor is just so over the top gone that it’s useless to even try.

Mexico has a growing middle class and their education system is providing their huge and large young population with better access to the future.  The government and corporate PR advertising is getting stronger and promoting good responsible stuff to the youth.   Its’ really good here.  Impressive!

Now Mexico is reaching out to the rest of the global world to attract business and relying less and less on the USA for it’s travel industry.

I think that’s a great strategy that will bring dividends because, sadly, the USA is hopeless market!  We’re dealing with a country that has 84%  of it’s population believing that Mexico is dangerous when it’s the exact opposite.  The USA is far more dangerous than Mexico!

Strange huh!   Hearing that truth has gotta go against the mainstream but it is exactly true!   Sorry to hurt your feelings!

In the end, the determination to assassinate the character of Mexico is too strong and deliberate by US main stream media.

There are many suspects for this delibrate attack but like all things in the USA, war is convoluted, ugly, messy and profitbale; so you know someone is making money off this deal.  But who?   It certainly ain’t cousin Jethro!  And you?  Are you making money off this deal?  No?  And now you’re mentally not able to come to a Mexican resort and enjoy hot warm oceans on sandy white beaches….really!  Sucks to be you!

Now for those Americans living in Mexico reading this, I know I have been very direct with my fellow Americans here but the time to be subtle is over.

We tried being polite.  Being polite and accomodating the neuroris is not working.

It’s time to hit back hard now and tell them the truth.  Yes, the truth!  Even if it hurts or they push back with made up FOX “facts”, sadly, it’s time to hit them back harder and maybe, just maybe, we can save a few from the grips of the brainwashing facsists posing as freedom sellers in blue and brown suits!

God Bless America …….and Mexico too!

For more information on retiring in Mexico, visit AccessLakeChapala.com

ABOUT THE AUTHOR: Johnny Punish is a musician, artist, entertainer, life coach, and syndicated columnist. His articles appear in Veterans Today, MunKNEE and his blog. His art music is promoted by Peapolz Media Records and played on net radio at Last.fm , EarBits and more.