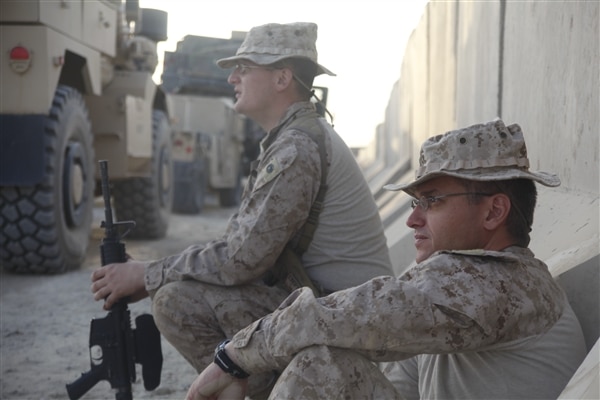 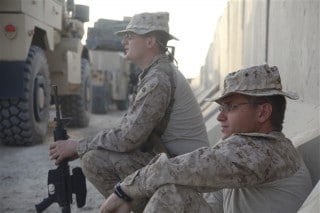 FORWARD OPERATING BASE DELARAM, Afghanistan, June 10, 2011 – It’s 2:53 p.m., and religious programs specialist Navy Petty Officer 3rd Class Matthew Gallagher is nervous. Pacing in the blazing Afghanistan sun, Gallagher knows that he and the Navy chaplain he is sworn to protect have a convoy to catch in seven minutes — one that very well may leave them stranded if they are late.

Gallagher already has given the chaplain several notifications that they are running short on time, but the Navy lieutenant is engaged in a conversation with a young corporal. This may be the only chance that the lieutenant, based miles away at Camp Leatherneck, will have to visit the Marines from his squadron for some time.Suddenly, with one minute to spare, Navy Chaplain (Lt.) Stephen DiCenso, Marine Wing Support Squadron 272 chaplain, emerges. Luckily, the convoy’s departure was delayed.

“That’s what you call ‘ministry on the fly,'” DiCenso said with shrug and a smile to a nervous Gallagher. “That is what I love about this job.”

“I only stayed in for a single enlistment, and then used my Montgomery GI Bill to go back and finish college to pursue other opportunities,” he said. “It just turned out that all those other opportunities came together, and I came back in the military as a chaplain 20 years later.”

In between, DiCenso tried a few career options, working as a New Jersey state probation officer and as a disabled veterans representative. But his involvement with his church during that time would steer his life in a new direction.

“I began attending church 10 years ago as a result of having some of the same issues I minister to young Marines about come up in my own life,” DiCenso said. “My wife and I were married while I was in the Marine Corps, and we struggled with learning how to be married and how a good marriage works. We struggled until we started finding solutions from our church pastor.

“The things he taught us are principles that brought my wife and I closer together, healed our wounds, and made my family a stronger unit,” he continued. “These are some of the same tools I share with the Marines and sailors of my unit.”

During that time DiCenso started ministering to youth groups and said that was when he felt a calling to become a pastor.

“When I first went to seminary in August 2005, my intent wasn’t to become a Navy chaplain,” he said. “That was probably the furthest thing from my mind. There was a chaplain recruiter who spoke to us there, and I was like, ‘Yeah right, I’m too old and too out of shape for the military now.’ I went through my time at seminary intending become a pastor at a local church somewhere.”

But a friend of DiCenso’s who had gone to seminary and had become a chaplain made the former Marine, then in his late 30s, begin to reconsider his intention.

“A friend became a chaplain in the Army with the 82nd Airborne Division, and I remember him telling me about the ministry he was doing and the interactions he was having with all the young enlisted guys,” DiCenso said. “It just really got me to think about it, even though he was a lot younger than I was.”

DiCenso said he originally leaned toward serving in the Army, but that his wife, Evelyn, persuaded him to serve young Marines and sailors. By January 2010, DiCenso was in training to become a Navy chaplain.

DiCenso had little time after arriving at his new duty station at Marine Corps Air Station New River before he was confronted with the harsh reality of the duties the chaplaincy entails.

“I received a phone call on my duty phone at around 10 or 11 p.m. with a Marine saying, ‘Hey, Chaps, I got a shotgun to my head,'” he recalled. “As I talked to him over the phone, I asked him to get his neighbor, who got the gun away from him. At that point, I drove down to Wilmington, picked him up, and with the direction of his sergeant major, I brought him to the naval hospital.”

DiCenso said that by starting a counseling relationship beforehand with the Marine and letting him know that he could call him any time he had a problem, he felt he was able to diffuse a situation that could have ended far differently.

“I like being a Navy chaplain because here it’s about more than pulpits, pews and congregations — it’s more about personal interactions with people,” he said. “I love learning about the lives of each and every Marine and sailor and understanding who they are.”

Since arriving in Afghanistan in March, DiCenso has been busy fulfilling the spiritual needs of Marine Wing Support Squadron 272 personnel based at Camp Leatherneck and other forward operating bases in the surrounding area. Recently, he traveled by convoy to visit the Marines stationed here.

“He’s been down a few times in the three months that we’ve been here,” said Marine Corps 1st Lt. Kevin Zaffino, the detachment officer in charge of the Marine Wing Support Squadron 272 Marines here. “He’s dealt with the personal problems of Marines here on many occasions, and was heavily instrumental in addressing one Marine’s issues and getting him back to Camp Leatherneck, where he could receive the appropriate help he needed.”

Gallagher, the religious programs specialist who works closest with DiCenso, said this is where the chaplain’s former Marine enlisted experience comes in handy.

“I think the chaplain’s greatest quality is his ability to relate to the Marines regardless of rank,” Gallagher said. “I think this is partially because he was a Marine. He’s been there and gone through most of the problems young Marines face.”

One particular Marine, Cpl. William Reid, an aircraft rescue firefighter and Prattville, Ala. native, received an unexpected visit from the chaplain on his June 4 visit here. Reid’s wife, Amy, had given birth to his third child the day before. DiCenso heard about the event and came to congratulate the young Marine.

“I think it’s really cool that he comes out to visit us like this,” Reid said. “He seems like a genuinely nice guy. I have no idea how he knew that we had a baby. It’s crazy how he just seems to know things like this.”

Zaffino said DiCenso’s visits are something he greatly appreciates and looks forward to.”It’s pretty impressive that he’s been able to get here the times he has, considering he has over 20 locations in the area of operations that he’s responsible for,” Zaffino said. “The first question he has when he gets here is always what he can do for the Marines. It lifts morale when he’s here, and I can definitely tell the Marines trust him.”

DiCenso said his goal is to remain in the Navy and stay a chaplain for as long as possible.

“I think my main motivation is probably my family,” he said. “They know that even though I’m away from them, sometimes for months at a time, I am committed to something greater than myself. I’ve not chosen to work in a comfy church. I’ve been called to work in this ministry, and if the calling is to be here, I can’t deny it.”