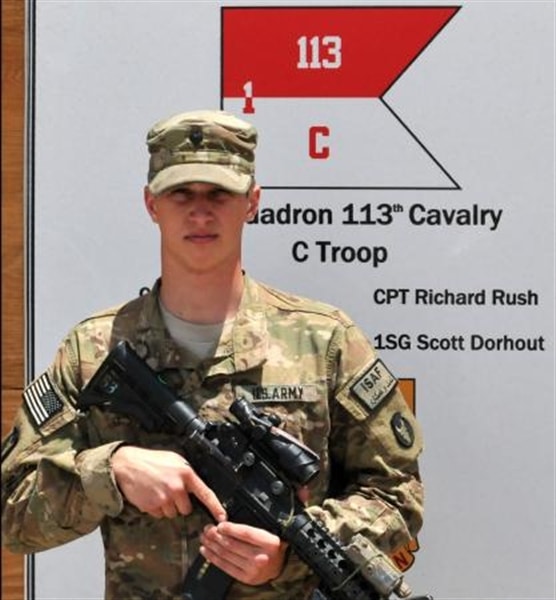 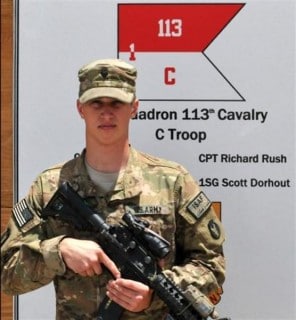 BAGRAM, Afghanistan, June 17, 2011 – “There is something I need to tell you” are not the words any mother wants to hear from her son who is deployed to Afghanistan.

“I am fine and healthy and not hurt, everything is OK — but,” Albers said to his mother over the phone, “I have been shot in the helmet.”

“You were wearing the helmet right,” his mother responded.

The phone call was made May 28 from Craig Joint Theater Hospital at Bagram Air Field, Afghanistan.

Albers and his team were conducting a patrol earlier that day in Parwan province when the Afghan police officers they were teamed with spotted an individual associated with insurgent forces. While searching a hillside, the team came under fire.

“My head cleared the hill … I saw a house on my right, and as I was in the middle of saying, ‘Hey I got a house over here,’ when I heard the first shot,” Albers said. “I felt something hit me in the side of the helmet and was knocked to the ground. It felt like someone had hit me in the head with a wooden baseball bat.”

The team quickly took cover and responded with fire on the building. Albers was stunned, but after checking himself and realizing he was still alive, he regained his bearings and took up a position to return fire.

“I laid there for what seemed like five minutes, but realized later that it was just a couple of seconds. I thought to myself, ‘Am I dying? No, I don’t really think so,’” Albers said. “Felt my head, no blood or anything, so I thought, ‘OK. What just happened to me?’ I was confused but I turned around and started laying down fire from the direction it had come from.”

“I was just getting plinked at, rounds were hitting in a consistent, natural firing rhythm, but I look up at Albers and his position is just getting obliterated; he was covered in dust,” said Air Force Staff Sgt. Jason Roland, the 116th Air Support Operations Squadron joint terminal attack controller from Tacoma, Wash., who was attached to Albers’ team that day. “Someone was going full-auto on his position, so I yelled up at him and told him to move.”

The group provided suppressive fire so Albers and Roland could pull back and regroup with the rest of team who were taking cover behind a building and wall.

“It really surprised me, from the moment I thought, ‘OK, I am fine and there is no blood running down my face,’ until after we met up with the lieutenant, I don’t really remember anything,” Albers said. “I think that is because I wasn’t thinking, I was reacting, doing what needed to be done; covering fire, moving back, whatever it was. I think that was all because of our training, muscle memory kicked in. It made me think, ‘All that time we spent training wasn’t stupid. It wasn’t pointless. It is needed and it works.’”

Albers reacted like he was trained to, and he seemed responsive and aware, Roland said. The only part that seemed strange to his fellow team member was a question he kept asking.

“Albers did fine. The only thing that was funny is as we fell back, I realized something is little weird with Albers. He keeps asking about his helmet,” Roland said. “It feels like something hit his helmet; he wants me to look at his helmet. I say, ‘I don’t care about your helmet. I want you to [watch] to the north because if we get attacked they’re going to come from the north.’”

The team called in air support and enemy fire subsided enough to assess the situation. One Afghan police officer was injured, so medics were called to attend to him. Albers assisted the medic with the other injured teammate.

“At that time, the medic had time to check on Albers and he realizes that he got shot in the helmet,” Roland said. “He passes this on to the lieutenant who decides it is time to pull back.”

As they began pulling out, Albers said he finally realized the seriousness of what had happened.

The events that day stuck in his mind for days to come, he said, and serve as a reminder to stay vigilant and to enjoy every day, no matter how tough.

Medics evacuated Albers, and after hospital staff gave him a battery of tests, they found him to be perfectly healthy, minus a small burn mark across the top of his head.

The patrol that day was a normal one for any infantryman facing risks that accompany a deployment to a combat zone. Albers knew this, but he wanted to be in the military ever since he could remember.

“According to my parents, I have wanted to join the military since I could talk — it was either Marines, Air Force, this, that,” Albers said.

When he was 17, Albers spoke with a recruiter, who is now a first sergeant in the same squadron, and decided the time was right. Now at age 20, he said he feels the deployment is going well and has enjoyed every part of his three-year military career. He is the only member of his large family currently in the military, but his father and grandfather are both veterans.

“My favorite part is the camaraderie, especially after this incident. Everyone has been very supportive,” Albers said. “They are all like my brothers now.”

The team watched over him at first, making sure he was doing all right, he said.

“Everyone was cool about it. Everyone was here for me, making sure I was OK and if I had to talk to anybody they were here for me,” Albers said. “We joke around about it, now that I they know I am fine, and now that I got the Purple Heart.”

Albers’ experience a big part of the jokes shared about the team. These simple actions prove to Albers that they care and help him to not take the incident too seriously. His family also has helped to keep him smiling about the incident.

“My nephew, Talon, got on his mom’s [social media page] and sent me a message, ‘I am glad you’re OK, but no more messing around. That was scary, don’t be messing around anymore,’” Albers recalled.

The 1st Squadron, 113th Cavalry, will be in Afghanistan for another month or two, and afterward, Albers said he is looking forward to spending time with family and friends and going back to school when he returns.

The shot has not deterred his desire to be in the military, and he plans to reenlist when his current contract ends. Albers plans to stay in the infantry, and has hopes to move up in the ranks to become a squad or platoon sergeant.

The helmet, which will be sent to his house after military officials examine it, will serve as a training tool to teach his soldiers the importance of the proper wear of their protective equipment, or at the very least, to keep their heads down.