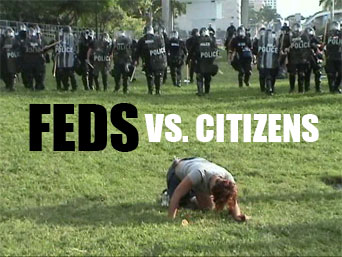 We speak to former FBI agent Mike German, who now works at the American Civil Liberties Union, and Texas activist Scott Crow, who has been the focus of intense FBI surveillance from 2001 until at least 2008.

Using the Freedom of Information Act, Crow received 440 pages of heavily redacted documents revealing the FBI had set up a video camera outside his house, traced the license plates of cars parked in front of his home, recorded the arrival and departure of his guests, and observed gatherings that Crow attended at bookstores and cafes.

The agency also tracked Crow’s emails and phone conversations and picked through his trash to identify his bank and mortgage companies. “It’s been definitely traumatizing at different points,” says Crow. “But if we don’t come out and be open about this, then they’ve already won, and the surveillance and the ‘war on terror’ wins against us.”