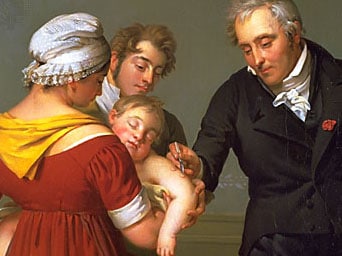 Part one of two

(This story is from Tom Valentines archives circa 1996; Vaccines remain one of the most contentious issues today, with a determined anti-advocacy continuing to battle fascist monopoly medicine.)

The idea of vaccinations to protect an individual against disease-causing germs was actually invented and practiced before mankind knew anything about germs. That’s right, it started early in the 1700’s when somebody got the idea (theory) that mixing the blood of a smallpox or plague survivor with an untested person might somehow pass along protection. They would make incisions in the hands or arms and much like we’ve seen “blood brothers” made in the movies, they would press the wounds together.

History says Edward Jenner conceived of vaccinating people against the dread smallpox (a viral infection), by pricking them with a cowpox tainted instrument back in 1796, yet mankind didn’t have the germ theory of disease, let alone know anything about viruses, until the time of Bechamp and Pasteur almost a century later. Koch’s postulate (the basis of the germ theory diagnostics by Robert Koch) wasn’t put forth until 1882.

So, Jenner developed a vaccination theory before we knew anything about the immune system and infectious pathogens. And, until the invention of the electron microscope in the 1930’s scientists knew virtually nothing about viruses.

Roger Bacon is credited for pointing out that “man can do much more than he knows.” The “cowpox” inoculations against smallpox first conceived by Jenner is a good example of doing without knowing. If the truth be told, we are still “doing” a lot more than we “know” when it comes to immunization programs today.

However, we certainly know more than they did back in Jenner’s time, or Pasteur’s time, or even the times of Jonas Salk in the 1950’s when polio was allegedly eradicated by vaccines. And after reading this article, you will know a lot more about the history of vaccines than you ever imagined.

The vast majority of Americans would automatically assume that “science” is on the side of the medical point of view. If this assumption were true, there would be far less controversy. Medical science, even in our modern era of high tech, is anything but “absolute.” And, the medicrats responsible for the programs, are not truthful. (consider recent lies about flu vaccine and miscarriage.)

So, what can we believe?

We shall strive to deal with this issue rationally.

First, does experience validate the theory? Let’s look at the record.

Our entrenched medical establishment points to the smallpox record as convincing. We are told that up until Benjamin Rubin invented the “bifurcated vaccination needle” in the 1960’s, a device allowing vaccinations in primitive areas of the world, the record indicated at least two million people died of smallpox every year worldwide. By 1980, the World Health Organization proclaimed that smallpox had been “eradicated.” This appears very impressive, but does not consider all the variables involved.

For example, we find in the book “Vaccination; the Silent Killer” by Ida Honoroff and Eleanor McBean, the following:

“In 1796 Edward Jenner started his cowpox vaccination craze, which increased the smallpox epidemics to such an extent that the disease became endemic, and in 1837 to 1839 there was the sweeping epidemic which killed 22,081 people. In spite of this absolute proof of the deadly effects of vaccination, the vaccine promoters managed to get a compulsory vaccination law passed in England in 1853. The epidemics then increased to such an extent that by 1870 to 1872 there was the worst smallpox epidemic of all time, which killed 44,480 people. The English people fought the vaccination promoters until they were able to abolish compulsory vaccination in England in 1948. They have had no epidemics since then.”

Isn’t that a fascinating story of medical history? Not only was man doing more than he knew by vaccinating himself against viral organisms that he didn’t know existed, but he also introduced “vaccination promoters” and “compulsory laws” into the equation way back then.

Is it any wonder that some have said our human behavior is capable of boggling even the Angels?

The late Dr. Robert Mendelsohn, “The People’s Doctor” provided this look at the historical record regarding smallpox, which, we are told with a great deal of media hype, is a disease that has been utterly eradicated:

“Did you know that several years after the first smallpox vaccine was introduced into the Philippines (it was first given in 1910) and after 95 percent of the population—8 million people—had been given 24,500,000 doses of vaccine, the Philippines experienced its worst smallpox epidemic in history?”

To add another wrinkle of dark humor to this tale of human folly, a letter to the editor in a recent issue of The Lancet (September 28, 1996) featured a photograph of a grave headstone dating back to 1788. The letter and photo were headlined: “An old malpractice claim.” The tombstone read as follows: “In Memory of Peleg, son of Thomas & Mary Conklin, who died of the smallpox by inoculation Jan. 27th, 1788; aged 17 years.”

Not only is the date of the contention, 1788, interesting in that it precedes Jenner by eight years, the letter-writer in The Lancet pointed out that “medical malpractice claims are not new in the New World.” Neither are claims that vaccination caused an untimely death of a youngster.

Apparently, the facts about disease eradication have been misrepresented and twisted.

The story of the lessening of specific diseases is not cut and dry at all; there are variables and multiple factors—not merely vaccinations—to take into account when analyzing the record.

Part two will outline the incredible history of the polio vaccine.