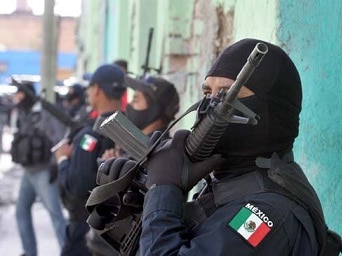 (June 19, 2011- Columbus, NM) – The recent raid of a stash site on the Mexican side of the border suspected of containing a cache of guns and/or drugs is drawing attention once again to the U.S. border town of Columbus, N.M. — where 11 people, including the mayor, police chief and a village trustee, were recently indicted on gun-running charges.

The Mexican stash site was raided this past Wednesday evening, June 15, according to former CIA contract pilot and New Mexico resident Tosh Plumlee, who was present at the scene taking photos.

The stash site — actually two warehouse buildings on a ranch just south of the border and some 20 miles east of Palomas, Mexico, which borders Columbus — was allegedly raided by the Mexican military in cooperation with a U.S. military special-operations task force, Plumlee asserts. That Pentagon task force has been active inside Mexico and along the border region for several years and provided intelligence and other unspecified support for the recent raid, according to Plumlee.

In addition, U.S. Border Patrol agents assisted the operation by providing back-up support along the U.S. side of the border, along with Mexican soldiers on their side of the border, to close down possible escape routes for suspects fleeing the raid site.

As evidence of the operation, Plumlee provided to Narco News date-stamped photos of Mexican soldiers and Border Patrol agents conversing with each other at the border fence shortly after the raid of the ranch location was launched less than a mile behind them inside Mexico. He also provided a photo of a Mexican helicopter that assisted with the raid.  See The Narcosphere, Reporter’s Notebook: Bill Conroy for the rest of the story.