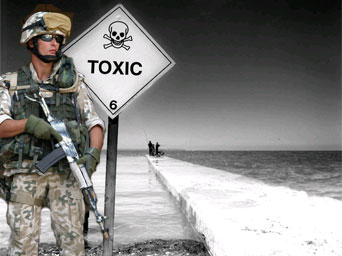 As you may have heard or seen in recent news articles from both U.S. and South Korean News Departments, major reports have been reported about toxic herbicides being buried throughout Korea by U.S Army personnel.

Searching on the Internet with Google, delivered 58,400 hits under the key words of ‘toxic herbicides being buried throughout Korea by U.S Army personnel,’ including an interesting article at the Korea Times website,

In addition, some documents and testimony has been made public which indicates the deployment of the Dioxin contaminated herbicides Agent Orange, Agent Blue and Monuron covered a much wider date range than has historically been reported by the Departments of the Army and Defense at hearings in Congress. For those who have never heard the terminology of Monuron, Monuron is a herbicide “recommended for use in non-crop areas for total control of weeds, and it would be released to the environment as a result of this use.

Monuron’s registration with EPA for use as a herbicide was cancelled in 1977, and therefore if it is still manufactured, it would be manufactured for export.

In soil, monuron is transformed to its metabolites primarily by biodegradation.

Additionally, a document from the Appeals Management Center of the Department of Veterans Affairs — clearly states that the areas where these toxic herbicides were deployed is far greater than reported – in fact into areas far to the south of the DMZ, Demilitarized Zone.

As your constituent, Veterans-For-Change expects actions among the leaders in calling for this hearing. It is time for our United States Congress to be accountable about the issues concerning the United States of America and our military and not dwell so much about the actions, morals, or lack of morals from our representatives.