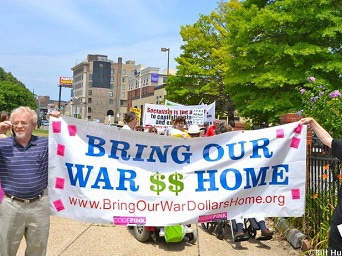 The Organizers Back Story!

The US Conference of Mayors just passed an historic resolution urging Congress and the President to end the wars in Iraq and Afghanistan so that the trillions of dollars currently squandered on illegal wars can be poured back into our communities and used for funding our enormous unmet human needs here at home.

But there is a back story to the passage of this resolution and it involves the months of work by national and Baltimore-based activists who worked to get the resolution written, introduced and passed.

Activists from the Pledge of Resistance Baltimore, Fund Our Communities, St. Vincent de Paul Church and Full Employment Baltimore worked with Code Pink and Mayors for Peace to get co-sponsors among the mayors prior to the conference and to organize public events centered around the conference in Baltimore (June 17-21).  Code Pink activist, C.J. Minster, wrote the resolution and Code Pink was instrumental in getting mayors around the country to co-sponsor before the conference.  Baltimore activists from the Pledge of Resistance worked for several months with Fund Our Communities, Full Employment Baltimore and St. Vincent de Paul church organizing a Teach-In at Baltimore’s Inner Harbor on June 17 and a Rally and March for Jobs on June 18.  Both events featured representatives from groups such as: Healthcare for the Homeless, United Workers, Stop the Youth Jail, Safe and Sound, Southern Christian Leadership Conference-Baltimore, Viva House, Out4Justice, Chesapeake Climate Action Network, b-more mobile, Iraq Veterans Against the War and the Maryland Education Coalition.  The leaders of these groups struggle every day to provide more – not less – to the people of Baltimore and Maryland and they are doing it on less and less money, as our communities are forced to contribute enormous sums of money to the two wars, leaving human needs unfunded.  Activists also passed out leaflets to and spoke personally with many mayors and their family members during morning leafleting events about what these wars are actually costing us.  To a person, these mayors got it.  They did not have to be convinced why they have budget deficits and why people are suffering more than ever.  When activists holding Bring Our War Dollars home banners appeared at the mayors dinner event at Clipper Mill on Sunday evening, they were cheered and welcomed by the mayors – not exactly an everyday occurrence.

New alliances were forged during this organizing, especially between the African-American activist community and the traditional peace and justice community and that is something many activists have worked hard to foster.  As Ralph Moore, head of Full Employment Baltimore, said repeatedly ‘we all have to continue working together.’  And he is right.  The powers that now control our government, our institutions and our lives do not want us to join forces, which is exactly what we need to do if we’re ever going to change what is being done to us by the forces of greed.

Fund Our Communities, Bring the War Dollars Home is a coalition of community groups in Maryland which was started by Jean Athey of Peace Action Montgomery. It is part of a growing nationwide movement to cut military spending and fund domestic needs.  The goal is to establish a strong grassroots movement to forge a change in our nation’s priorities, away from war and militarism and towards peace and social justice.   Fund Our Communities is now planning a series of Town Hall meetings in Maryland for September on jobs, taxes, democracy, war– and the People’s Budget – to bring ordinary citizens into the budget and priorities debate and get them to pressure their elected representatives to end the wars, cut the war/military budget and redirect that money to funding human needs at home.

If the mayors put their political muscle behind this resolution and not only present it to the US Congress, but work behind the scenes to push for it to become US policy, then its significance to the peace movement is obvious.  We are thrilled that this resolution, the only anti-war resolution passed by the mayors since 1971, was passed now.  That is a big deal.  But the mayors have real work to do to get the US Congress to stop funding the wars and actually bring that money home to us and our communities.  Which means all of us have more work to do as well!