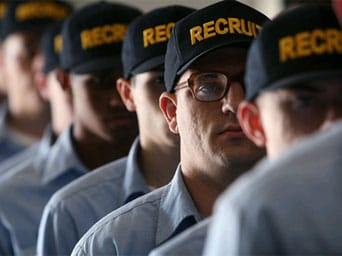 Thanks to Section 9528 of the No Child Left Behind Act of 2002, recruiters from the Air Force, Army, Coast Guard, Marine Corps and Navy have the same access to secondary school students as college recruiters or potential employers. This, in concert with mandatory Selective Service registration for all 18-year-old males and the Armed Services Vocational Aptitude Battery [ASVAB] exam that is given to nearly three-quarters of a million high school juniors and seniors each year, has prompted many domestic peace activists to organize opposition to the militarization of youth. They advocate “truth-in-recruiting,” arguing that lofty promises made at the time of enlistment — extensive travel, scholarships or an easy route to U.S. citizenship — often fail to materialize once service begins.The setting changes but the scene does not: Men and women in crisply pressed uniforms enter public high schools across the country and cajole the teenagers they meet into signing on the dotted line to serve Uncle Sam.

What’s more, these peace activists say that they are paying particular attention to female recruits, warning them of potential pitfalls: The risks associated with wartime service even in “non-combat” positions, as well as the too-common experience of sexual harassment and assault by unit supervisors and peers.

The War Resisters League, an 88-year-old national group with more than 25 chapters across the U.S., targets students and, when possible, tables at schools to provide little-known facts about the military: One in four soldiers gets a less than honorable discharge, making them ineligible for college money; nearly one-third of females seeking health care from the Veteran’s Administration report experiencing a rape or attempted rape while conscripted. 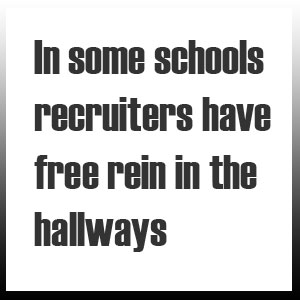 “Up until the economic recession began, the military had a hard time finding recruits,” says Kimber Heinz, National Organizing Director of the War Resisters League. “But now the military is not only meeting its quota, it’s a de facto jobs program and you have recruiters preying on students who can no longer afford college or find work.”

One of its brochures, Know Before You Go, offers this information for those thinking of signing up: “The military contract states, ‘Laws and regulations that govern military personnel may change without notice. Such changes may affect pay, benefits, and responsibilities as a member of the Armed Forces regardless of the provisions of the enlistment document.’” In other words, beware: Even though a recruit has signed a contract, the terms can be modified at the military’s discretion.

“We let people know that if we’re at war a recruit can be stop-lossed and might end up on multiple tours,” Heinz continues. “The recruit has no control over this. We always remind people that the military is the only job where if the worker quits, he or she goes to jail.” The organization also provides data on what it means to be a conscientious objector and outlines the penalties for failing to register for Selective Service.

Other truth-in-recruiting messages are also hammered. For one, despite promises to the contrary, Heinz reports that skills learned in the military are rarely transferable to the civilian world. “We make it clear that many, many people come out of the military traumatized or disabled,” Heinz continues. “We ask people to think about what it means to be an occupier of someone else’s land and we try to get people to consider whether they’ll be able to live with killing someone or seeing someone killed.”

It’s a heavy message, and it is repeated by more than 75 local organizations throughout the 50 states.

Joanne Sheehan is an adult advisor to YouthPeace, a student-led social justice group at the Norwich Free Academy, a public, regional high school in eastern Connecticut. Since 1998 YouthPeace has raised issues including military recruitment and Islamophobia with the student body.

For the past seven years, members have also coordinated an annual opt-out campaign to inform students that the law allows them to request that their contact information be withheld from recruiters. “Schools typically send student names, addresses, and phone numbers to the military in October, so we have about a month once school starts to publicize the opt-out provision,” Sheehan says. “A few years ago we pushed the superintendent to put information about opting-out in the first paragraph of a letter that is sent to parents at the beginning of the year. We want to be sure they understand that their children don’t need to provide data to recruiters, that it’s something they can opt-out of.”

In some schools recruiters have free rein in the hallwaysThe peace groups also broach a broader anti-militarist agenda, even in places like San Diego with a heavy military presence and 110,000 military employees. There, the school board recently voted to ban students enrolled in the Junior Reserve Officer Training Corps [J-ROTC] from taking in-school marksmanship classes. “Fifteen of the 18 high schools in San Diego have ROTC. One of them, Lincoln, was temporarily closed for rehabbing and when we saw the plan for the renovation, we saw that it included a firing range. We brought this to the community’s attention and formed the Education Not Arms Coalition,” says Rick Jahnkow, coordinator of Youth and Non-Military Opportunities, known as Project YANO. 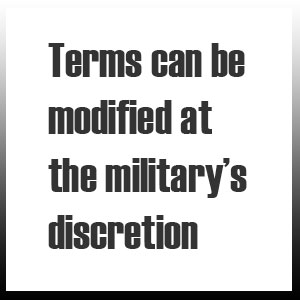 The consensus, Jahnkow says, was to focus on ending gun classes rather than campaigning against ROTC more generally because group participants felt an anti-ROTC campaign would fail. Education Not Arms pointed to the pervasive gun violence already plaguing the Lincoln area and denounced planned cutbacks in Advanced Placement classes needed by college-bound pupils. The efforts paid off: The school board ended all in-school gun training.

Boosted by this victory, Project YANO and Education Not Arms next turned their attention to school-based recruiters. In late 2010 San Diego activists succeeded in restricting recruiters to two school visits per year, similar to policies in New York City, Chicago, Seattle, Los Angeles, San Francisco and Oakland. As a result, recruiters must schedule specific times to meet with potential conscripts and cannot disrupt “normal school activities.”

“In some schools the recruiters eat lunch with the kids, hang out and chill in the parking lot, and have free rein in the hallways,” says Pat Elder of Maryland’s PeaceAction Montgomery. “In most places, what they get to do depends on the principal. I’ve seen schools where male recruiters are always around, playing one-on-one basketball with kids who don’t have fathers.”

This scenario led New York City’s Youth Activists-Youth Allies Network to monitor recruiters to ensure that they obey the regulations that circumscribe their access to individual students.

YA-YA Network staff — all but one of whom are between 15 and 19 — also lead workshops about U.S. foreign policy and the costs of war and militarism. “Several years ago I asked participants what their peers thought about the wars in Iraq and Afghanistan,” says YA-YA advisor Amy Wagner. “The wars were not very present for them. I talked about how during the Vietnam War when you turned on your TV you always heard the number of dead soldiers. They thought about this and concluded that facts were being hidden from them on purpose. They did a lot of research and the result was a short video now up on YouTube, called The War Will Not Be Televised.

Terms can be modified at the military’s discretionThe YA-YA Network is presently focused on making sure that schools abide by regulations that mandate that a school staff person be appointed to provide guidance on military recruitment in each high school. “We first want to investigate and see if this is being done,” Wagner says. “If not, why not. If it is, we want to know where these people are getting their info and who’s training them. We want to give students the information they are entitled to so that they fully understand their range of options.”

Indeed, it is this idea of options that propels organizing against militarism. Take the Armed Services Vocational Aptitude Battery test, a four-hour recruiting tool used in nearly 12,000 high schools nationwide. To date, Maryland is the only state to require schools to select a provision that stops student scores from being sent directly to recruiters.

“Look, if you take even moderate Democrats and sit them down and ask them who they think should give student data to the military — mom and dad or the Pentagon – they’ll all support parental decision making,” says Pat Elder of PeaceAction Montgomery.

They want students to understand that becoming a soldier is not necessarily the best way to show personal strength or valor. “A lot of people want to be tough and powerful, so they enlist,” says the War Resisters League’s Kimber Heinz. “They ultimately learn that enlisting is not a good way to test how strong they are.”

Eleanor Bader is a freelance writer, teacher, and activist. She writes for The Brooklyn Rail, The L Magazine, RHRealitycheck.org, and other progressive and feminist publications.