Home Government Impact on Pakistan: Withdrawal of US Forces from Afghanistan 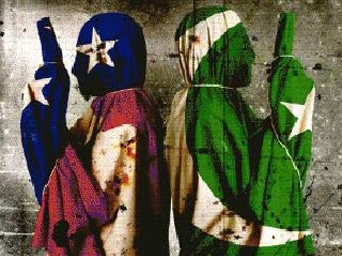 Impact on Pakistan: withdrawal of US forces from Afghanistan

Obama announced withdrawal of 30,000 forces from Afghanistan. With the withdrawal of 30,000 troops, roughly 68,000 troops will still remain in Afghanistan. What impact this will or will not have on Afghanistan, is another debate altogether.  This withdrawal is proposed in three steps,5000 troops in first instance, another 5000 in the second and 10000 in the third go. What is obvious, is, with the US elections round the corner, it is a cotton candy being held out to the people of America, having come into power in the flush of promise to “bring the boys home”. A promise that Obama failed to fulfill. Further, the exorbitant costs of foreign wars at the expense of the Americans has become difficult to justify. A lot of ink has been wasted on cotton candy, I am sure more will!

The point of concern is, the two forked strategy being followed in Afghanistan and Pakistan. Whereas, talks are underway between US and Taliban to work out a power sharing relationship  in Afghanistan, in Pakistan, the reverse strategy is in place. I mean, is it ok to support prostitution in one area and oppose it at another? Weird psychology, no?

Pakistan launched offensives against the militants in Bajaur, and  in Swat. Millions remain displaced to this date. Now, there are new pressures to launch an offensive in North Waziristan. The drone policy, killing thousands of Pakistanis , mostly women ,children, and defenseless people. Collateral damage, we are told!

There are some hard questions the establishment in Pakistan must face:

1-      Are the interests of USA in complete line with those of Pakistan? If different on certain tangents, what cost to Pakistan to follow through?

A friend, a retired Senior Office from the Air Force , argued Pakistan Army & ISI should have balanced both. He asks the Army and wrote to me, ”When you knew the Americans were double playing on you from day one by aiding and abetting criminals from Baluchistan and giving them safe haven in Afghanistan ,why did you not do the same to Americans?”.

This anger and feeling of being cheated, is reflective of the general people of Pakistan.

2-     Is Pakistan been “compensated” enough to compromise her dignity & sovereignty?

Hussain Haqqani, in a recent meeting to allay American misunderstandings on Pakistan, pointed out ,in a diplomatic tone, the peanuts being fed to the US monkey. US claim to have given 18-20 $ billion in assistance.

“These funds, strictly speaking, are not assistance. These cover the cost of fuel, ordnance, etc. used by Pakistan in counter-terrorism operations. Of the remaining $6-8 billion, nearly half the assistance was military assistance some of it to the previous government. This leaves about $3 billion which the present government has ostensibly received. Even here the monies appropriated under the Kerry Lugar Berman legislation in FY 2010 have not been fully disbursed”.(Dawn News 17th June 2011).

America is following a policy of pressurizing Pakistan from every possible end. Though, Pakistan’s inefficiency on some fronts does not help things, it is a fact that over the past months, the war on terror has shifted to Pakistan.

What impact will this “soft” withdrawal of troops from Afghanistan will have on Pakistan? The answer is: Nothing.

If anything, it may come more sharply in focus and be placed under greater pressure than before on Pakistan.

Pakistan must stand on her feet and fight for her interests. She must stop being apologetic and where needed, clean up her backyard.

A friend wrote,” Our elders ” watered the tree of Independence by “their’ blood” so that our generation live with peace and honor…how much more blood
is to be let before we become an honorable people?”

I do not have the answer.

About the Writer: Yasmeen Ali is a lawyer based in Lahore. She teaches in a University & may be reached at [email protected]