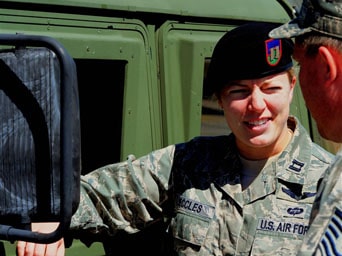 SHAW AIR FORCE BASE, S.C., June 27, 2011 – Like many aviators, Air Force Capt. Sarah Eccles, an F-16 Fighting Falcon pilot from San Antonio, caught the flying bug at a young age. On her 15th birthday, her father surprised her by taking her to a Wright Flyers Aviation flight school.

As she sat in the cockpit with the instructor, operating the controls and soaring through the air, Eccles said she realized she’d found her passion.She began taking flying lessons soon after that test run. At age 17, on March 20, 1999, she experienced her first solo flight.

“It was a little intimidating going airborne, being in charge of this machine,” Eccles recalled. “It’s a huge responsibility, but such a confidence builder. I thought, if I could do this, what’s next?”

After her high school graduation, Eccles attended the Air Force Academy and then two years of pilot training, where she fulfilled her dream and earned her wings as an F-16 pilot. After flying the F-16 for four years, she reached a time all Air Force pilots come to: their Air Education and Training Command lead-in fighter training, forward air controller and air liaison officer tour, also known as an “ALFA” tour.

This tour is a time when Air Force pilots take a break from flying to serve in other, career-broadening roles. Fighter pilots may become instructor pilots, operate remotely piloted aircraft or serve as air liaison officers, providing planning, coordination, and execution expertise to multiservice combat operations.

“The tour is designed to bring experienced flyers away from their main weapons system to other jobs to use their experience and to gain some experience,” Eccles said. “The point is for pilots to broaden their careers.”

ALFA tours generally are assigned to mid- to senior-level captains, but occasionally pilots will take their tours right after pilot training.

Her responsibility as an ALO is to serve as the link between the Air Force and the Army in combat. Whatever the mission, she is trained to help provide close-air support for ground forces.

Eccles was pleasantly surprised as she stepped away from flying an F-16 and into the role of ALO, she said.

“Being an ALO has been the most personally satisfying job I’ve had in my career,” she said. “Working with the enlisted corps is amazing. As a pilot, you generally don’t get to interact with them at this level.”

The job, she added, also has given her the opportunity to rest, recharge and redirect her energy.

Through her time as an ALO, she’s had the opportunity to see how the Air Force and the Army relate and work with each other.

Eccles recently returned from a deployment in southwest Asia, where she served as an ALO. Her job was to lead a crew responsible for directing fixed-wing, close-air support assets. At times, missions and priorities would change because ground troops were attacked or ambushed.

The ALO would take “911 calls” and have a map out to organize and plan the close-air support, she said. Eccles was in charge of directing the fighters to the troops on the ground who needed help. She said her close-air support experience as an F-16 pilot came in handy during her deployment.

Because of that day and several other successful coordinated missions, her crew received the 2010 Air Combat Command Team of the Year award.

“Our proudest moment there was being able to help out those who were in the thick of it,” Eccles said.

The experience gave her a better understanding of the process that goes into providing close-air support, she said. It’s knowledge she will able to take back to her fighter squadron.

The captain said she will miss being an ALO when her tour is over, but she is excited to be back in the air. She wishes it were possible to do both.

“Of course I’ve missed flying,” Eccles said. “I’d be lying if I said it wasn’t hard to watch the same planes I used to command fly overhead and hear the jets rattle the windows. I know I’ve done it before, and I’ll do it again. My experience allows me to share my love of flying with the 682nd.”