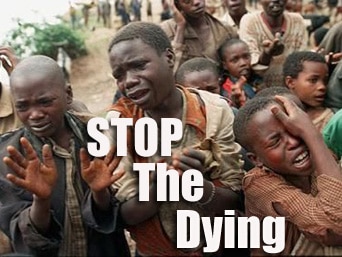 “Stop the dying” was the order of the day in Entebbe, Uganda in late July 1994.  An American Joint Task Force (JTF) was located on the fourth floor of the Entebbe Airport.  The JTF had been tasked by Washington to provide support to the Rwandan civil conflict that was causing a massive humanitarian disaster.  Hundreds of thousands of Rwandan Tutsis and moderate Hutus were fleeing the massacre in Rwanda that was to leave close to one million dead.  Those who fled to escape the slaughter were gathering in various countries that neighbored Rwanda.  The main area that these Rwandan refugees gathered was an ad hoc encampment in Goma, Zaire where the population was to eventually reach 1.4 million.

The JTF had formed rapidly in July 1994 at the fledgling JTF Facility at Kelley Barracks near Stuttgart, Germany.  I was the first person to report into the empty building on a hot summer’s evening.  Corporal Pat Collier, USMC, was with me and I tasked him to sit in the entrance to the JTF Facility and have reporting personnel sign in.  Corporal Collier assumed his duties as I toured the facility with Kelley Barracks personnel.  My direction to them was to find a way to cool the building as I was anticipating a large influx of personnel into a facility that was seriously overheated in the unusually hot summer.  By the time I had finished my tour, Pat had a line of various military personnel who had been assigned to the JTF from commands all over Germany.  As a Major I was the senior officer and I began to form the arriving personnel into traditional assignments based on their military skill sets.  Very much later in the evening some of the senior officers began to arrive and the JTF took shape rapidly.  Pat and I were assigned to appropriate divisions within the JTF and the pace of operations accelerated rapidly.

Within a week Pat and I were on an Air Force C-141 aircraft heading south to Entebbe to help establish the forward element of the JTF.  I was assigned as the Logistics Officer and became involved in many aspects of the mission.  The initial part of our tasking from the European Command was to support the humanitarian relief efforts underway by a variety of aid organizations.  The lead agency in these efforts was the United Nations High Commissioner for Refugees (UNHCR).  This agency struggled to manage the overwhelming influx of refugees into Goma.  The thing that escaped many civilian and military personnel at this time was the sheer logistical magnitude of the problem.  Not only were these refugees endless in number but many were injured and ill from the harrowing experiences they had endured in their journey to Goma.  Many of the aid agencies under the UNHCR had personnel experienced with providing assistance to refugees.  They did not have personnel experienced with managing a refugee camp that would grow to over a million.

For me back at Entebbe the daily life was a continual barrage of requests for support from Goma and other outlying areas adjacent to Rwanda.  The scale of these requirements challenged my logistical experience even though I had participated in Operation Sea Angel where 138,000 Bangladeshi people were killed by a Cyclone in April 1991.  Over two million people were eventually evacuated from the Bangladesh coastal disaster area and the operation was considered one of the largest military humanitarian relief efforts ever conducted.  Operation Support Hope was on a similar scale but the mechanics of logistical support were very different and more complex.  Entebbe became a logistical hub whereby supplies and materiel were flown in from all over the world by large cargo aircraft.  Locally at Entebbe smaller cargo aircraft shipped these supplies out to Goma and other areas.  The runway and cargo storage at the old Entebbe airport (adjacent to the new airport) were below my office window and the daily panorama of aircraft and cargo loading was a live conveyor belt of support for Goma and other refugee locations.  The old airport had been left pretty much as it was after the Israeli raid in 1976.  The control tower was still showing fragmented dents where the raid force had opened up on the sniper who shot and killed Jonathan Netanyahu, the raid leader.  This was a poignant backdrop to a very high energy, intense effort to push relief supplies and cargo out to the hundreds of thousands of Rwandan refugees who had escaped the ethnic slaughter in their homeland.

Coordination with the UNHCR’s Operation Center in Geneva bought the world to Entebbe with relief supplies and assistance that characterized the truly international nature of this operation.  Russian Antonov 124’s mingled on the Entebbe runway with American C-5 aircraft.  US Marine CH-53 helicopters flew in a detachment of Marines from ships off the coast of Kenya.  New Zealand Hercules C-130 cargo planes cycled relentlessly as huge Maori cargo personnel supervised the local Ugandan labor force.  Japanese 747’s arrived in abundance to discharge relief supplies from their national Civil Defense Program.  I would not say that this was a smooth and seamless effort by any means but the international response proved once again that nations will respond to the type of tragedy that was unfolding in Rwanda.

As the situation at Entebbe matured the “strap hangers” began to arrive in droves.  Many of these fresh faces were senior officers trying to get some experience in humanitarian relief operations.  The rank structure of the JTF became “top heavy” and mere Majors were assigned to lesser duties.  At one point I was assigned to help erect the tent that was to become the dining facility for JTF personnel.  This was also the time when I was due to rotate as my replacement was inbound from Germany.  The last few days I spent at Entebbe were still awash with the reasons for why we were there in the first place.  We had “stopped the dying” in that the death rate at Goma had gone from 5,000 a day in early July to 1,500 a day in August.  The influx of relief supplies and other types of assistance had provided support to the massive refugee population that had fled the slaughter in Rwanda.

The day I left Entebbe I said my goodbyes and Pat Collier came to see me off.  We shook hands and he saluted smartly.  I looked out the C-141 window as the aircraft took off.  Entebbe and Lake Victoria faded away into the haze and I pondered the efforts of the past few weeks.  The terrible ethnic slaughter had been the catalyst for a huge humanitarian effort.  The words of Paul Laurence Dunbar would later provide a fitting epilogue:

“And he, who I thought was my neighbor, came with swift and easy hate in his hands . . .”