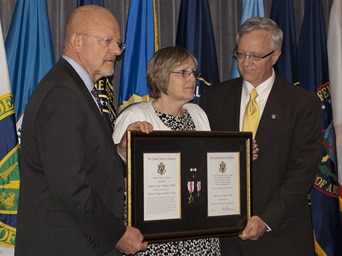 “We’re here today to pay tribute to an outstanding Marine and an extraordinary intelligence professional,” Clapper said. “The Marine Corps has already recognized Luke, so this is … a small token of appreciation and respect and esteem from the intelligence community.”

Clapper said Pyeatt was a “standout young man,” a Civil War buff and an accomplished bass player, who was sensitive enough to learn American Sign Language so he could communicate with, and interpret for, a deaf friend.

“He was an Eagle Scout … [and] a young man who lived his faith, including serving on a mission in Russia,” Clapper added.

After Pyeatt enlisted in the Marine Corps, he quickly excelled as a signals intelligence collector, Clapper said.

“In four short years, Luke proved himself time and again,” he added.

During boot camp, language training, and after assignment to Camp Lejuene, the young Marine consistently excelled at his assigned tasks, the director said.

As a corporal, Pyeatt was selected to be a team leader, and deployed to Afghanistan, Clapper noted.

“He continued to set the example,” the director said. “Because of his job, he knew he couldn’t be on every patrol [but] insisted on conducting the very first one, in a heavily contested area.”

The young leader wanted to be certain he knew what his team would be going through when they went “outside the wire,” Clapper said, but the young Marine died during that first patrol.

During a conversation with Pyeatt’s parents before the ceremony, Clapper said, Cynthia Pyeatt handed him a memorial card for her son that included a quote from English economist and philosopher John Stuart Mill.

During his remarks, Clapper shared the quote on the card: “War is an ugly thing, but not the ugliest of things. The decayed and degraded state of moral and patriotic feeling which thinks that nothing is worth war is much worse. The person who has nothing for which he is willing to fight, nothing which is more important than his own personal safety, is a miserable creature and has no chance of being free unless made and kept so by the exertions of better men than himself.”

Clapper then presented a framed citation and the medal to Pyeatt’s parents.

The medal was established Oct. 1, 2008, to acknowledge the “extraordinary and mostly unsung accomplishments of intelligence community professionals,” he said.

The award is second only to the Intelligence Cross in the intelligence community’s medals for bravery, the spokesman said.

Cynthia Pyeatt said she and her family don’t know the details of what her son did in Afghanistan to earn such a prestigious medal.

“We’re not supposed to know, so he did that right,” she said. “I just wish he could be here.”

Her son was a patriot, she said, who loved his country.

Pyeatt’s father retired from the Air Force as a chief master sergeant after a 30-year career. Cynthia Pyeatt said when her son spoke of enlisting, she asked him why his father’s service wasn’t enough of a contribution for the family.

Not everyone can be in the military or be a Marine, Cynthia Pyeatt said, but “you can better your community, you can better the world you live in.”

“If more people would look at our country and say, ‘I can step up and do something … to make this better,'” she added, that would be a tribute not only to her son but also to all the other service members who have been hurt or killed serving the nation.

“We’re one family, and there are thousands of families like us that have huge holes in their lives,” she said. “I wonder sometimes if it’s worth it, but he believed in what he was doing, and I owe him the respect of respecting his decision.”