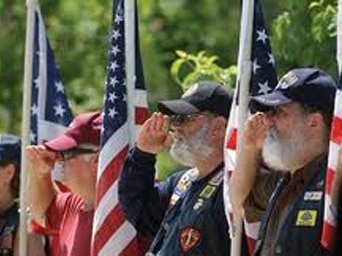 On Monday July 4th the Huston Coalition of Pastors will head up a peaceful demonstration at the Houston National Cemetery in Texas. Operation Firing For Effect will air a live broadcast of VFVC LIVE with correspondences on location at the Houston National Cemetery. Live coverage will begin at 11:00 AM (EST) until 12:00. You can listen on your computer at WWW.STARDUSTRADIO.COM.

Stand for religious freedom at Houston National Cemetery!
HAPC joins call for termination of Arleen Ocasio for anti-religious bigotryHouston Area Pastors and Patriots:What better way to celebrate the 235th anniversary of our Independence than take the time to stand against religious bigotry by government officials and for religious freedom at the National Cemetery on the 4th of July! Read the story below if you have not yet heard, and make plans to join us for a one-hour, spontaneous rally on Monday!

(June 29, 2011)-Houston, TX – A greater Houston coalition of pastors representing a broad ethnic and denominational spectrum is planning an event on the 4th of July to call for the removal of Arleen Ocasio, director of the National Cemetery in Houston. Ocasio ignited controversy prior to Memorial Day by attempting to censor a pastor’s prayer, and has issued a general policy prohibiting reference to God or Jesus as well as other prohibitions of religious expression at the cemetery.

Pastor Willie Davis of Houston, an Army Special Forces veteran himself, stated on behalf of Houston Area Pastor Council that Ocasio’s actions are offensive in every possibly way and should result in her termination. “We concur wholeheartedly with Congressman Ted Poe’s call for her dismissal for these egregious attacks on the sacred right of expressing religious faith on the hallowed ground of our National Cemetery on behalf of those who died to protect that right,” Pastor Davis declared. “There can be no better way to spend a few minutes on Independence Day than to stand together as a community at the National Cemetery and make our voices heard.”