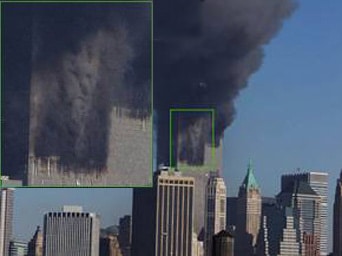 Something massively evil happened on September 11, 2001 and it was not only seen in the billowing smoke from the trade center towers but also in the resultant 9/11 official cover up. Two months prior to its tenth anniversary ~ here are eleven 9/11 questions which have yet to be adequately answered along with the still  unanswered question of Dick Cheney’s role in the most treasonous act in American history

As you look at this unusual photo of the smoke shrouded twin towers on 9/11/01, you can almost see the face of Satan looking down on his handiwork. For evil was indeed at work on that infamous eleventh day of September, 2001 but the face was not Satan but it was most certainly the face of evil.

Yet for all of his influence, the world knows very little about Dick Cheney, who is now at home completing his memoirs.  It’s well known that the most powerful vice president in U.S. history has also been the most secretive and guarded of all public officials. “Am I the evil genius in the corner that nobody ever sees come out of his hole?” Cheney asked rhetorically in 2004 and then answered “It’s a nice way to operate, actually.”

And that is precisely how Cheney has operated to accomplish his dark Neo Con vision and when a full, thorough and independent investigation of 9/11 is eventually accomplished ~ the spider at the center of this web of treason, deception and lies will be Darth Vader himself ~ Dick Cheney.

James Petras offers the correct verdict on Cheney’s vision ~  “As for the neo-conservative pipe dreams of successful sequential wars, cooked up by the likes of Paul Wolfowitz, Feith, Abrams, Libby et al, to eliminate Israel’s adversaries and turn the Persian Gulf into a Hebrew lake, the prolonged wars in Iraq, Afghanistan and Pakistan has, in fact, strengthened Iran’s regional influence, turned the entire Pakistani people against the US and strengthened mass movements against US clients throughout the Middle East.”

Meanwhile, the worldwide 9/11 truth movement slowly rolls on and one of its most effective spokespersons has been Paul Warburton. Here is an excerpt from Warburton’s letter to the BBC written on July 7th, 2011 ~ “You can see how widely my correspondence is now spreading and how favorably it is welcomed in the 9/11 Truth movement. On board on the 9/11 Truth movement are some of the finest minds in the world and some of the most moral people in the world. (Doctors, Pilots, Scientists, Architects, Engineers, First Responders, some victims family members, some lawyers, some high ranking military staff, even some ex intelligence staff and thousands of gutsy activists (our true heroes, many unknown and who work very hard, who go onto the streets around the world every week to spread the truth – all of them committed to the pursuit of truth over the most pivotal event of the 21st Century – 9/11). Pursuing this goal puts some of them in physical danger. We have already lost some dear people in suspicious circumstances. The two notable exceptions to the 9/11Truth movement are the mainstream church and media in both the UK and the USA. The two great societal bodies that people look to for truth. Their silence on such a major issue of injustice has been deafening. I suggest it has little to do with a lack of intelligence. It has a lot to do with courage or the lack of it.”

Warburton than makes his point ~ Crystallizing this down to a few basic principles of criminal and investigative journalism you at the BBC have failed as a fact to ask these basic questions about 9/11;

Warburton ends with this statement ~ “Each above fact is suggestive in itself but taken as a cumulative the argument is overwhelming and would pass the criminal standard of proof beyond reasonable doubt ~ in that the Official 9/11 report is radically wrong.”

So now, after ten years, millions of people throughout the world are still asking questions and not getting answers about the validity of the official report ~ which is not only radically wrong but purposely misleading .

9/11 Commission co-chair Lee Hamilton said “I don’t believe for a minute we got everything right”, that the Commission was set up to fail, that people should keep asking questions about 9/11, and that the 9/11 debate should continue ”

9/11 Commissioner Max Cleland resigned from the Commission, stating: “It is a national scandal”; “This investigation is now compromised”; and “One of these days we will have to get the full story because the 9-11 issue is so important to America. But this White House wants to cover it up”

9/11 Commissioner Bob Kerrey said that “There are ample reasons to suspect that there may be some alternative to what we outlined in our version . . . We didn’t have access . . . .” He also said that the investigation depended too heavily on the accounts of Al Qaeda detainees who were physically coerced into talking.

And the Senior Counsel to the 9/11 Commission (John Farmer) – who led the 9/11 staff’s inquiry – said “At some level of the government, at some point in time…there was an agreement not to tell the truth about what happened“. He also said “I was shocked at how different the truth was from the way it was described …. The tapes told a radically different story from what had been told to us and the public for two years…. This is not spin. This is not true.” And he said: “It’s almost a culture of concealment, for lack of a better word. There were interviews made at the FAA’s New York center the night of 9/11 and those tapes were destroyed. The CIA tapes of the interrogations were destroyed. The story of 9/11 itself, to put it mildly, was distorted and was completely different from the way things happened”

If even the 9/11 Commissioners don’t buy the official story, why do you?

By the way, be sure to clear a spot on your summer reading list for Dick Cheney’s self serving memoir ~ which will be in stores Aug. 30th of this year ~ It’s title is In My Time, A Personal And Political Memoir. Amazon has already reduced the release price from $35.00 dollars to $21.00 dollars and Cheney probably has no idea of what humiliation and abuse awaits him on his book tour ~ if indeed there is one.

Every abuse of power by the Cheney/Bush administration can be traced to the 9/11 false flag operation and cover up and we, as a nation, will not be free until we fully open this Pandora’s Box and uncover the answers we continue to demand as well as the hidden evidence of America’s greatest bamboozle ~ which we can no longer deny regardless of how painful it may be to acknowledge.

“There was a dearth of visible debris on the relatively unmarked [Pentagon] lawn, where I stood only minutes after the impact. Beyond this strange absence of airliner debris, there was no sign of the kind of damage to the Pentagon structure one would expect from the impact of a large airliner. This visible evidence or lack thereof may also have been apparent to the secretary of defense [Donald Rumsfeld], who in an unfortunate slip of the tongue referred to the aircraft that slammed into the Pentagon as a “missile” ... Lt. Col. Karen U. Kwiatkowski, PhD, U.S. Air Force (ret) – Former Political-Military Affairs Officer in the Office of the Secretary of Defense. Also served on the staff of the Director of the National Security Agency.

I rest my case ~ let a true investigation of 9/11 begin and let’s demand answers to these and many other long simmering questions.