Home Life USS Liberty Song "Please Can You Tell Me" 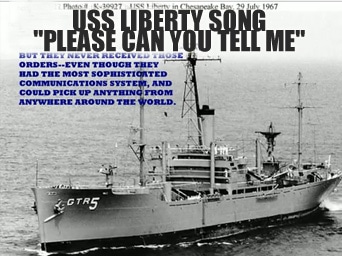 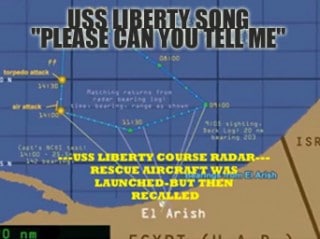 This is a Song Dedicated to the 34 Men Killed, and to the Survivors of the USS Liberty, Attacked by the Israeli’s on June 8, 1967.

Yes, I know… Israel, Israel, Israel… it’s becoming tiresome, turning up Israel under every stone.  But, there they are!  More and more of this stuff, and stuff like this, are appearing everyday.

It is like Grace Halsell says it was, “what we did not know, and were shocked to learn….”  But, finding out and telling about it, are horses of different colors, uphill battles, seldom won, which she describes as part of the problem and amongst those things we “did not know.” 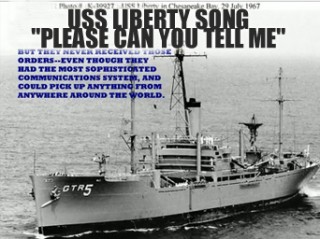 PLEASE CAN YOU TELL ME

NOW LIBERTY WAS A LONE SHIP, SOME CALLED HER A “SPOOK SHIP”

HER MEN SWORN TO SECRECY.

SHE SAILED IN INTERNATIONAL WATERS, OFF THE COAST OF SINAI,

INTO THE MEDITERRANEAN SEA.

WITH MANY HARD DAYS OF FULL SPEED AHEAD,

THERE WAS SOON A MUTUAL FEELING OF DREAD,

AS SHE APPROACHED THE ARAB/ISRAELI WAR ZONE.

AND THOUGH THE MEN WERE ALL TOGETHER, THEY KNEW THEY WERE ALL ALONE.

OH PLEASE CAN YOU TELL ME WHY SO MANY OF MY BROTHERS DIED.

WAS THIS SOME SORT OF GAME OF TREASON,

OR WAS THIS JUST SOME KIND OF HORRIBLE LIE?

WELL FINALLY BACK IN WASHINGTON, THEY SENT OUT A MESSAGE,

THAT THE SHIP MOVE FARTHER OUT TO SEA.

BUT THERE WERE TOO MANY ERRORS, AND TOO MUCH TIME WASTED;

THE BOMBS WERE COMING DOWN; IT WOULD BE TOO LATE—FOR THE LIBERTY.

WAS THIS SOME SORT OF GAME OF TREASON,

OR WAS IT JUST SOME KIND OF HORRIBLE LIE?

The most recent account in the book What I Saw That Day, is indeed a heartfelt account by Phil Tourney a survivor of the attack. Merlin Miller sums it best in his review at Amazon.com

“This heartfelt account, written by a survivor of the USS Liberty, is a page turner. The events that unfolded on June 8th, 1967 altered the course of history, yet are generally unknown to the American public. Israel attacked a defenseless US spy ship, intending to kill all aboard, and her act of betrayal was covered up by our own government and media. This book reveals the reasons behind this incredible conspiracy, as well as a riveting account of the horrors that day and how they have haunted the lives of the survivors and their loved ones. Many have spoken out about this outrageous act of war, but none so eloquently as Phil Tourney. This story should be made into a major motion picture, as the story has incredible drama with international implications. It is full of mystery, action, betrayals, and, most importantly, incredible acts of heroism and sacrifice. This book will keep you on the edge of your seat and should be read by every patriot.”

More on the USS LIBERTY “INCIDENT”

A review of the USS Liberty story here explains a lot of how and why we have arrived at the state and conditions in which we currently find America and its governance!

The company’s birth coincides with final testing phases of the CamoScience™ iPad 2/iPhone 4 app and in conjunction with the Army’s urgent call for a service-wide Camouflage Improvement Effort.

“Special Operations Apps uses common platforms, like the Apple or Android systems, to integrate different hardware and equipment and centralize them into common, familiar, smart devices that the operators already know or own,” said Cincotti, who is president of the new company.

“So we lighten the operator’s load and provide more real-time data, improved capabilities, and more effective targeting — taking full advantage of cutting-edge commercial devices without the need for budgeting and developing new and expensive devices and platforms that only serve one function,” he said. “We get more powerful devices at lower costs and without the need to re-invent the wheel.” Cincotti, who founded camouflage-innovator MW Research and Development, Inc., and created more than a dozen patent-pending technologies, said that the new company’s mission “is to answer the expressed and unexpressed needs of special operations around the globe and to put more decision-making capabilities into the hands of operators in the field.” As president of MW R&D, Cincotti is credited with creating Photographic Camouflage, camera-derived camo design that is an orders-of-magnitude advance over paint and pattern concealment. Using site-specific, digitally enhanced GEO-Int imaging, Cincotti developed a cluster of intellectual properties, including Photo Stealth™, Photo Real™, T.R.I.G.G.E.R.™, RO.U.T.E.S.™, MW Gripz™, Photo Veil™, 3D Hot Targets™, P.I.R.A.T.E.™, and P.I.R.A.T.E. 3D™.

The launch of Special Operations Apps dovetails with the release of the CamoScience™ app by MW R&D. CamoScience™ is a photo application for the iPad 2/iPhone 4, other mobile tablets, and smartphones that turns site-specific photography into what Cincotti coined “Photographic Camouflage.” To develop CamoScience™, the MW R&D Apps Team paired with NASA veteran Dr. Craig Hunter. Dr. Hunter and his brother Todd founded Hunter Research & Technology, and they are renowned as the minds behind The Theodolite App for the iPhone 4, the best-selling navigation application. CamoScience™ is a new type of hybrid app, blending Hunter’s advanced understanding of app development and the groundbreaking site-specific Photographic Camouflage created by Cincotti.

CamoScience™ passed beta testing earlier this year, debuted in late February, and has been in final testing phases since April.

Within days of the CamoScience™ announcement in February, the U.S. Army released a solicitation for a service-wide Camouflage Improvement Effort (Solicitation Number W911QY-11-R-0008), which has as its two objectives to develop “a family of camouflage patterns that offers improved concealment and reduced detection capability over current patterns” and “to acquire the data rights for a portion or all of the best performing camouflage pattern families.” Cincotti said this was a happy synchronicity, “since we’ve been quietly working in this field since 2007. All of our interactions over the years with special operations forces incline us toward anticipating requirements,” he said, “and while we can’t know how the award process will ultimately unfold, we hope to make a contribution to this shift in the camo paradigm.” CamoScience™, was developed from two of MW R&D’s patent-pending technologies, Photo-Real™ and Photo-Stealth™, new camouflage processes introduced in 2007 that utilize site-specific photography from the intended operating environment — designed initially for the unique requirements of U.S. Special Forces. website iphone 4 apps

The solicitation response date for W911QY-11-R-0008 is June 15. The criterion for award is passing a photo-simulation test.

For the new company, Cathlena Spencer, who the led the commercial-application team for CamoScience™ has been named Chief Technology Officer of Special Operations Apps. Mark Tocci, a former Ranger and patent-pending inventor, will serve as Vice President of Business Development. David Mullins, a former Special Forces operator, will lead in-house subject matter experts.

Cincotti, in addition to his duties at Special Operations Apps, continues as president of MW R&D. He is the son of the late Col. Joseph G. Cincotti, the original ground-force commander of Blue Light — the first Special Forces counter-terrorism unit — and a former Commandant of Special Forces Schools. Col. Cincotti was named a Distinguished Member of the Regiment this past August in a ceremony at Fort Bragg, N.C.

The 2011 Special Operations Forces Industry Conference provides a forum for collaboration and networking between key stakeholders from industry, academia, professional organizations, and government agencies who support the special operations enterprise as it continues to adapt to unpredictable threats around the world. The SOFIC technology exhibition showcases new and emerging technologies and products developed by industry’s innovators, among them MW Research and Development, Inc., and Special Operations Apps.

Special Operations Apps, a privately held company, is based in Wilmington, N.C., strategically located between Fort Bragg and Camp Lejeune, and convenient to Virginia Beach, Va.