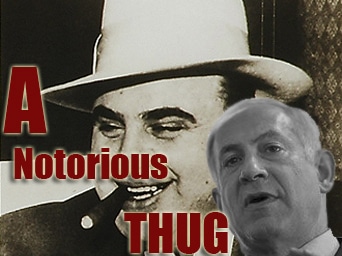 A thug enters your home, decides to stay, makes you his servants, and locks you up in the worst conditions.

When the neighbours complain about what’s going on in your home, the thug tells everyone that you are terrorists who want to destroy him and his family.

When the thug is told that he must treat you as equals in the house he has taken from you, he refuses, complaining that would leave him indefensible.

That’s Benjamin Netanyahu, Israel’s Prime Minister. He’s the latest in a long line of thugs who have burgled as many homes as arms from America could aid.

Krav Maga Instructor Nima Sirazi comments cogently on the double-talk used by burglars like Netanyahu to con the public:

“The oppressed becomes the oppressor, the culprit becomes the victim, occupation is security, illegal colonization is cultural liberation, aggressive expansion is righteous reclamation, genocide is self-defence, apartheid is justice, resistance is terrorism, and ethnic cleansing is peace.”

Netanyahu is not alone of course.  An even worse thug is the ex nightclub bouncer Avigdor Lieberman, Israel’s foreign minister.

This larger-than-life burglar stole one of the settlement properties for himself, kicked out the Palestinian home owners, moved in, took over and insisted that the occupation was necessary as a defensible border for Israel.

Writing in Haaretz, Gideon Levy reveals how Ilan Baruch, a veteran Israeli diplomat, acknowledged his inability to represent or explain Israeli policies. Last week he handed in his resignation letter.

Says Levy, “Our diplomatic corps today is comprised primarily of spineless propagandists void of values or a conscience.”

Levy points realistically to how Israel’s diplomats know what the world thinks of their country’s machinations, their thievery and attempts to cover it all up.

“They know that under Lieberman’s watch the Foreign Ministry has become a vessel of rage toward the entire world,” observes Levy. “They know that no ambassador is sufficiently adroit to explain the brutality of Operation Cast Lead, or the pointless killing on the Mavi Marmara ship.”

Israel’s diplomats “know that no country on the planet actually accepts the occupation, the settlements or the indications of Israeli apartheid,” adds Levy.

Despite what Israel’s diplomats know, they remain silent.  After all the leading thugs and robbers are their bosses.

If these thugs were Italian, they’d be called Mafioso, arrested and jailed for being guilty of organized crime.

But such a comparison with common thieves who steal others’ property is not possible for thugs who have protection..

The equivalent of organized crime judges being bought off can be seen in America simply by looking at the US congress who, like the family of a Mafia don, treat Netanyahu like the head of the Cosa Nostra

How long can Israel’s thugs keep getting away with the travesty of justice that’s no better than organized crime in America?

“Although Jews constitute only two percent of the American population, they have a disproportionate political impact: Pro-Israel interests have contributed $56.8 million in individual, group and soft money donations to federal candidates and party committees since 1990,” reports activist-writer Bob Burnett.

Organizations like AIPAC and AJC do more damage to Jews than any organized Jew-hating group. They stimulate what they call anti-Semitism, meaning anti-Jew.

Notes writer Rand Clifford, “Americans have been so meticulously trained to ignore evidence in favour of what they want to believe, in conjunction with what they are wanted to believe, that too many have been rendered unable to objectively weigh evidence.”

They hold the position that nothing Israel does can be wrong, and everything their organizations do must be accepted–an extremely dangerous position to hold.