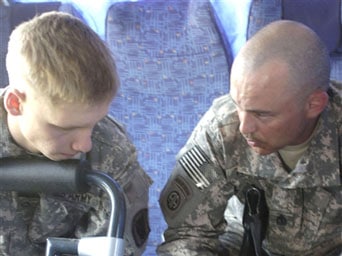 VICTORY BASE COMPLEX, Iraq, July 19, 2011 – Despite the strains military life can cause for families, being soldiers has proven to be a common denominator that has improved the relationship of a father and son serving in Iraq.

“We had the typical father-and-son relationship,” said Army 1st Sgt. Patrick Thomas. “But in advanced individual training, he started questioning if he could do this, and I would talk to him and work with him, and from that we started getting closer and closer.”

“It was different growing up,” said Army Pfc. Tyler Thomas. “We didn’t have much of a family life, because he was probably deployed every year and a half. Looking back, it seems like he was gone more than he was home, on either a deployment or just being at work before I woke up.”

Now, Patrick, senior noncommissioned officer in charge of the 1st Infantry Division’s Company A, 1st Special Troops Battalion, 1st Advise and Assist Task Force, and Tyler, a multi-channel transmissions systems operator with 50th Expeditionary Signal Battalion, 35th Signal Brigade, have reunited and become closer as NCO and soldier, and as father and son, while they serve in support of Operation New Dawn.

The son of a retired command sergeant major, Patrick enlisted as an infantryman, and, after completing basic and advanced individual training, attended airborne school. His first assignment was at Fort Bragg, N.C., with the 82nd Airborne Division’s 505th Parachute Infantry Regiment, and he deployed in support of Operation Desert Shield.

The Mobile, Ala., native said he credits his father for being the soldier he has become and hopes to influence Tyler in the same way.

“When I was younger, if I was doing something wrong or messed up, as my dad, he would talk to me. If it came to me getting hemmed up and my sergeant major called him, my dad would say he didn’t care, because the standards are the standards,” Patrick said. “And I treat Tyler the same way. You have to teach him to be a soldier, and that’s something my dad did for me growing up in the army.”

Tyler agreed. “There’s a level of professionalism we keep,” he said. “Just like any other NCO, he’s not my dad when I’m wearing my rank and he’s wearing his.”

That is how Tyler learns, his father said, and that is how he will build himself to be a better leader.

“[Being a soldier] has definitely helped my relationship with my dad,” Tyler said. “I wasn’t making the best decisions, and I probably didn’t live up to his expectations, but I can say after I graduated basic training, it’s continued getting better.”

Tyler also began his service at Fort Bragg and deployed to Iraq within six months, following the same path his father set out on 20 years earlier. Patrick said he shares a series of interesting and unique experiences with Tyler.

“In October 1990, I deployed for the first time in support of Desert Shield/Desert Storm,” he said. “I remember that Christmas Eve, I came off guard duty and the phones were open to call home. So I called my wife, and her dad said she was in the hospital having my son.

“I told Tyler on his 20th birthday last December, that it’s crazy because he will turn 21 here,” he continued. “I was here all those years ago when he was born. Now he’s here, helping to close out what I started.”

Although Patrick makes it clear to Tyler that he is bound to fulfill his duties as a soldier, he said he has not taken for granted the moments the two have shared so far.

“I went to his basic training graduation from Fort Gordon [in Georgia],” he said. “It brought a tear to my eye, especially seeing him as a father. You think, ‘Is he going to do good? Did we do everything we could as parents?'”

Patrick added that seeing Tyler on the parade field in his uniform and beret during graduation made him proud as a father.

“I can’t measure how proud I am of Tyler,” he said. “I’m ecstatic he’s done something with himself. Will he ever know how proud I am? Oh yeah, he gets tired of me telling him.”

And Tyler continues to try to earn and reciprocate his father’s pride.

“If there’s one thing I’ve learned from my dad, it’s that it takes years to build a reputation and a day to mess it up,” he said. “There’s a continuous proud moment of knowing how much he has accomplished, how hard he’s worked, and how many crazy things he’s done that no one but his little group will ever know about.”