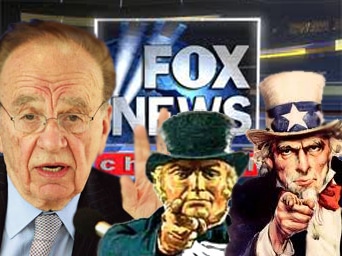 As eavesdroppers go, next to Uncle Sam and John Bull, Rupert Murdoch, the moral force behind Fox News, is an amateur.

That’s because a global eavesdropping scheme being run today by the United States and Great Britain dwarfs anything that Rupert Murdoch’s editors at The News of The World (TNTW) ever dared attempt.

British Prime Minister David Cameron may well deny he knew TNTW was tapping the phones of members of UK’s Royal household or those of American 9/11 victims. But he can’t claim he doesn’t know his country is a partner in ECHELON, which, according to Washington journalist Bill Blum, is a “network of massive, highly automated interception stations” that is eavesdropping on the entire world.

Calling it the greatest invasion of privacy ever, Blum says the ceaseless, illegal spy system sucks up perhaps billions of messages daily, including those of prime ministers, the Secretary-General of the UN, the pope, embassies, Amnesty International, Christian Aid, and transnational corporations and that “if God has a phone, it’s being monitored.”

Blum also said that during the countdown to its invasion of Iraq in 2003, the U.S. listened in on the conversations of UN Secretary-General Kofi Annan, the UN weapons inspectors in Iraq, “and all the members of the UN Security Council…when they were deliberating about what action to take in Iraq.”

Launched in the 1970s to spy on Soviet satellite communications, the NSA and its junior partners in Canada, Britain, Australia, and New Zealand operate ECHELON, which is a network of massive, highly automated interception stations covering the globe at the expense of American taxpayers.

Today, Ed Miliband, leader of the Labour opposition, is blasting PM Cameron on grounds that, according to The New York Times of July 19, “the recent scandals in British life were caused by a lack of accountability among those in high places.” Across Britain, Miliband said, “there is a yearning for a more decent, responsible, principled country.”