Home History The Eagle Has Landed 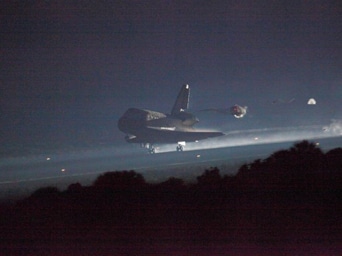 John Gillespie Magee, Jr., was an American who was born in Shanghai, China, in 1922 to an English mother and a Scotch-Irish-American father. Magee was 18 years old when he entered flight training. Within the year, he was sent to England and posted to the newly formed No 412 Fighter Squadron, RCAF, which was activated at Digby, England, on 30 June 1941. He was qualified on and flew the Supermarine Spitfire.

Flying fighter Interceptor sweeps over France and air defense over England against the German Luftwaffe, he rose to the rank of Pilot Officer.

On 3 September 1941, Magee flew a high altitude (30,000 feet) test flight in a newer model of the Spitfire V.  As he orbited and climbed upward, he was struck with the inspiration of a poem ~ “To touch the face of God.”

Once back on the ground, he wrote a letter to his parents. In it he commented, “I am enclosing a verse I wrote the other day. It started at 30,000 feet, and was finished soon after I landed.” On the back of the letter, he jotted down his poem, ‘High Flight.’

Just three months later, on 11 December 1941 (and only three days after the US entered the war), Pilot Officer John Gillespie Magee, Jr., was killed in action.

Read his poem High Flight, which all aviators, including myself, can identify with, and than watch a video of the last flight of the Atlantis and reflect on how high we have climbed to touch the face of god ~ which in reality can only be achieved by surrendering to love and our common innate propensity to unite and cooperate with one another in a  Unified Field of love and soul consciousness.

Oh! I have slipped the surly bonds of Earth
And danced the skies on laughter-silvered wings;
Sunward I’ve climbed, and joined the tumbling mirth
Of sun-split clouds, ~ and done a hundred things
You have not dreamed of ~ wheeled and soared and swung
High in the sunlit silence. Hov’ring there,
I’ve chased the shouting wind along, and flung
My eager craft through footless halls of air. . . .

Up, up the long, delirious burning blue
I’ve topped the wind-swept heights with easy grace
Where never lark, or ever eagle flew ~
And, while with silent, lifting mind I’ve trod
The high untrespassed sanctity of space,
Put out my hand, and touched the face of God.

Now watch a 16 minute video of the last flight of the Space Shuttle Atlantis, as it climbs, tumbles and hovers in the sunlit silence of space, with a moving musical sound track ~ and than think of James Magee Jr doing exactly the same thing 70 years ago at 30,000 feet in his Spitfire or myself ~ experiencing the same exhilaration in my Navy High Altitude Interceptor at 60,000 feet 50 years ago in the early 1960’s.

The eagle has landed ~ but it should also now be obvious that man’s quest to touch the face of god must eventually turn inward. The ultimate frontier is not space but understanding the journey of the heart and the true intent of love. T.S. Eliot said it beautifully ~ We shall not cease from exploration and the end of all our exploring will be to arrive where we started and know the place for the first time.