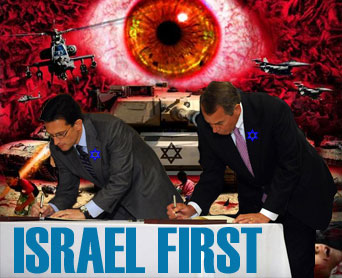 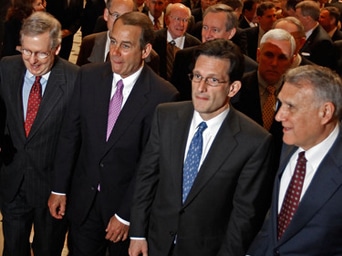 EDITORS NOTE:  Eighty-one congressmen, about 20 percent of the US House of Representatives, will visit Israel for week-long trips sponsored by American Israel Education Foundation in next three weeks during Congress’s summer recess. The first group of 26 Democrats are scheduled to arrive as early as Monday.

55 Republican, 26 Democratic congressmen about 20% of US House of Representatives to visit Israel by summers end. The Democratic delegation will be followed by two Republican ones, bringing a total of 55 Republicans.

You might note that they are freshmen Congressmen going  to Israel as guests of some Israeli educational organization affiliated with (AIPAC) American Israel Public Affairs Committee, obviously to be properly educated in American policy and political reality!

The votes may be in their constituency back in Hometown, USA, but the money which they will need to buy them and to feather their retirement programs will all come from Israel.

Why are we reading about this in the Jerusalem Post and not the NYTimes or the Wall Street Journal?

Eighty-one congressmen, or about 20 percent of the US House of Representatives, will visit Israel over the next three weeks during Congress’s summer recess, with the first group of 26 Democrats scheduled to arrive on Monday.

The Democratic delegation will be followed by two Republican ones, bringing a total of 55 Republicans.

Most of the representatives are freshmen congressmen, with 47 – or fully half of the freshmen Republicans voted into office in 2010 – making the trip.

For many of them, this will be their first trip to Israel.

Hoyer, in a statement, said he looked forward to “returning to Israel to continue learning firsthand about the evolving security situation in the Middle East, the deep challenges facing Israel, and the role the US can play in the region during this time of uncertainty.

I’m pleased members of Congress have this opportunity to study American interests in the Middle East and gain a deeper understanding of the issues involved in increasing stability in the region.”

The delegation will visit both Israel and the West Bank, and is scheduled to meet with President Shimon Peres and Prime Minister Binyamin Netanyahu in Jerusalem, and Palestinian Authority President Mahmoud Abbas in Ramallah.

Among those on the delegation arriving Monday are Illinois Congressman Jesse Jackson Jr., Ohio’s Betty Sutton, and Pennsylvania’s Mark Critz.

In a related development, The Israel Project will be bringing a group of 18 Washington-based ambassadors from Asia, Europe, Africa and Latin America to Israel on Monday for a weeklong tour and high-level meetings. Like the congressmen, they will also go to Ramallah, for a meeting with PA Prime Minister Salam Fayyad.

Among the countries represented on the trip are Albania, Barbados, Belize, Burkina Faso, the Dominican Republic, Haiti, Macedonia, St. Lucia and Uganda.

Some of these countries have been mentioned by officials in Jerusalem as likely candidates to either vote against, or at least abstain, when the vote on Palestinian statehood comes before the UN in September.