Home Economy What Would a USD Collapse Mean for the World? 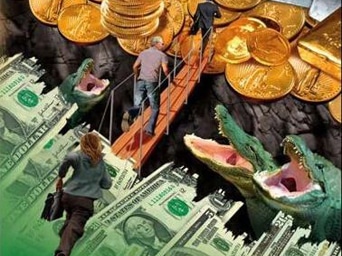 I came to the conclusion several years ago that it was just a matter of time before the world realized that the relative functionality of the U.S. dollar was about to go belly up – to collapse  – and that that time happened to coincide with that fateful date all the prophecies are going crazy about – 2012!

I find this coincidence remarkable because, were the USD to actually collapse, just think of the many economic and political disasters that would indeed unfold. The U.S. economy would stop dead for a period of time and the rest of the world, hitherto dependent on the old industrial/consumer economic model, would have to find a new economic paradigm to plan their economies.

A USD collapse means the entire structure of the world economy would collapse for a period of time, with a collapsed supply chain, among other things. The world would also go through cataclysms politically during that period. That usually leads to massive wars, starvation and mass homelessness around the world. Interesting. That’s the same stuff being prophesied in many of the numerous 2012 prophecies of various major religions! That is quite the coincidence. The demise of the USD will collapse the entire world economy and lead to collapsed policies, and then a massive world war. Yep, it fits like a glove.

Of course, some people cringe at an analyst such as myself talking about ‘religious bunkum prophecies’ but consider that I am a mathematician and also a former Oracle database systems engineer. I’m not exactly some dreamer. I certainly know the analytical methods. So, why am I saying this stuff then? How can I combine prophecies with analytical methods? Well, for one thing, I have a thinking paradigm where ‘if it works, it must be true, don’t leave out weird things in analysis, insisting only on some calculation based prediction’. That’s what chartists do. I don’t. Everything must be analytical to lots of people, and that is totally wrong often! The trouble with being analytical all the time is that there are times, and this is proven, where chaos enters the picture and everything changes. Chaos, by definition, is not predictable…

So, What Would Happen in a USD Collapse? (To find out go to our associate site here to read the article in its entirety.)