Home World How did Americans get so utterly clueless about world events? ... 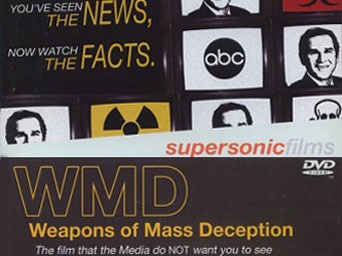 If you hear the indefensible defended enough times, confidently, by people with titles and credentials, it starts to sound like a good idea.

by Cassandra for Veterans Today

If you could just see what passes for “news” here in the USA, in both electronic and print media, you would understand American ignorance better.  It is literally a 24/7 barrage of straight-faced lies, distortions, and slick disinformation delivered on almost every front—including the so-called “liberal-leaning” newspapers and magazines, so-called “progressive” websites, and even public radio and public TV stations—not to mention the more partisan cable and commercial outlets.  We routinely see articulate and distinguished-looking university professors, think-tank scholars and Zionist-controlled public officials whose right-wing “expert opinion” on this or that issue is the ONLY view presented on a news show.

Never a Noam Chomsky or a Naomi Klein or a Robert Fisk or a Michael Parenti, or a James Petras,  NEVER—and very rarely people like Ralph Nader or Elizabeth Warren who, if they’re included, will be forced to compete with five or six other guests for air time.

So, nothing is ever covered in-depth unless it’s a piece of propaganda somebody wants to pull over on us.  Everything else is disjointed bits and pieces, he-said she-said, with no background or fact-checking to help us sort out the truth.  Sometimes they’ll have one moderate-conservative “expert” (a government flack, basically) facing off against a Neocon or Zionist; the only difference between them is the fine points about precisely when we should invade Libya or Iran to stop terrorism—never whether this would be a sane, lawful or moral thing to do, or have any effect whatsoever on terrorism—and never any alternate paradigm for looking at world events.  This is the kind of thing we see and hear, ALL THE TIME, DAY IN AND DAY OUT.  Even well-educated people here in the USA, who keep up with current events and read the newspaper, are badly misinformed.  Many of them tacitly believe that the truth probably lies somewhere in the middle between the opposing views they hear.  But since this “middle” has been absurdly skewed (with the actual truth of the matter omitted altogether), and since the “facts” they think they know are actually lies, they find themselves supporting the most outlandish things—or at least, lacking the certainty to oppose them.  (I don’t like wars, but maybe we really DO need to invade Iran to stop terrorism?)  (Maybe Hugo Chavez really IS a brutal dictator, since everyone seems to agree he is?)  And that’s the whole point of perception management: keep us confused with a blizzard of conflicting and unverifiable “information”, until we throw up our hands and conclude that the world has gotten too complicated to understand and we’d best trust our experts to decide what’s right.

And these are good people I’m talking about: people who believe in human rights and social justice, who are against racism and genocide and unnecessary wars and greedy mega-corporations; people who are willing to fight for what they believe in—-if they could only figure out what the hell the truth is and whose side to be on.  But unfortunately, they are very careful to keep away from “nutty conspiracy theories”, because they’ve been told by the experts they see and hear all the time to stay away from those!  These educated people want facts, not half-baked fairy tales!  So they discount and ignore everything that has been so described by the deceivers—-the very things that could lead them out of this labyrinth of lies.  And that’s the whole reason for all the money spent on perception management!  It works!  I believe Americans are the most lied-to and deceived people in the world, because we still cherish the idealistic myth that our leaders, our media and our highly-educated “experts” mean well and are mostly honest, if occasionally misguided—And even more importantly, the idealistic myth that powerful people would never, ever, conspire against the weak on a global scale and get away with it, decade after decade.

A lot of us are honest and really care about doing what’s right.  If Americans ever open their eyes to the truth, some things are going to change very quickly.  (But I just don’t know whether their eyes will be opened in time.)

Sigh.  How can that be changed?

The 64-trillion dollar question.  Our enemies are so powerful; they seem to control everything.  And the indoctrinated people are very resistant to hearing dissonant messages.

I know all about ignorant but well-meaning Americans, because just ten years ago, I was one of them.  9/11 came and went, and I never dreamed for a second that someone other than “al Qaeda” did it, because that’s what everyone was saying, everywhere.  Furthermore, it never occurred to me that I was taking the unproven word of government officials as truth,  just because they’d said it so soberly while wearing nice suits.  And I knew better than to be so trusting—or should have known.  But it was a bad habit I had formed over a lifetime of being an American, immersed in the soothing background music of American exceptionalism. 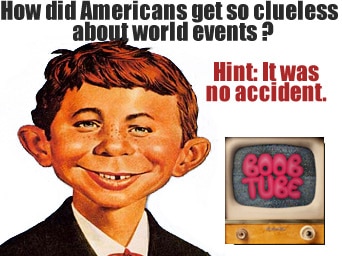 Sure, I knew Nixon had been a dirty liar, and Reagan an idiot, and I loathed Bush.  But really, that was little more than unthinking partisanship on my part.  Hadn’t I defended Bill Clinton, another dirty liar, to the end?—just because I liked him and therefore trusted him to act in my best interests?  (And why did I like him?  Because he said nice words and seemed to mean them, and because he was a member of the Democrats, whom I also trusted.  Yes, I was an idiot.  Now I see what a self-indulgent corporate toady and opportunist he was. (Oh, and a rapist to boot.)

And likewise I wholeheartedly supported Al Gore who I now realize is a NWO-connected fat-cat in a liberal-Democrat costume, living in a great big fat-cat mansion and making hypocritical self-important speeches.  And I was all about “war hero” and “Vietnam critic” John Kerry, although by that time even I saw clearly that my candidate refused to take a stand against the Iraq war, or to speak honestly about a host of issues; but never mind, I said, he has to lie to win the election.  Well what the hell is that?—I have to accept that my candidate is a liar and a moral coward and vote for him anyway?  And then he walks away from a stolen election, with the funds he solicited from me for a recount?—forcing other groups to solicit more money from me for recounts that Kerry won’t ask for because he’s already conceded?  So I hated Kerry after that, and I hated every politician that lied to me—and that was nearly all of them, both parties.

Well anyway, once I started reading Truthout in 2004, (TO was one of the few independent Online News and Opinion sites available back then. Thankfully scores of more truthful alternative sources of information services such as Veterans Today have sprung up since then, run by fearless, candid, diligent, relentless, conscientious, concerned, stalwarts determined to challenge the falsehoods peddled by politicians and propagandists paraded daily on American Cable News Networks across the country) it opened up a whole new world for me.  It took time to break up the logjam of my misconceptions; but I began to hear about problems with the government’s version of events on 9/11—-great big problems.  And about drug running out of Mena Arkansas, including during the years my precious Bill Clinton was governor; and of course there was the Katrina debacle, where I saw government officials pretend to be incompetent so that pre-planned disaster would ensue and prove very profitable.  And I discovered the Fed was a private banking cartel, and the debt-based dollar was an instrument of enslavement, and JFK wasn’t killed by a lone assassin or even by Cubans, and there is an enormous underground child-sex-trafficking network that reaches to the highest levels of government (George HW Bush) and industry and gives the cabal control over people….   Well, once you get an American to start looking at “conspiracy theories” instead of dismissing them, there is a snowballing effect.  I have spent much of these years trying to share my discoveries with others.  One way is on blogs; but after a while we’re all just preaching to the choir.  Eventually we all know the same things pretty much—-which is a good thing.  But the tough cases are the people who either won’t read blogs at all, or will only go to CIA-connected HuffPo or DailyKos and then they think they’ve heard the full range of everything credible that’s out there.

I have to tell you, some of my best friends and family are among the toughest cases.  Smart, highly-educated, committed to social change, politically-aware (as far as anyone can be without realizing both Bush elections were stolen), these people vote, they sign petitions, they join peace marches and canvass for Democrats; they read the NYTimes and listen to tedious speakers on C-SPAN in an effort to understand the issues; but although they may be “disappointed” with Obama, or even view him as “unfortunately weak” against those mean Republican bullies, it is simply impossible to get them to consider for a moment that Obama’s “weakness” could be intentional sabotage, that he could be working for someone else—a Trojan-horse candidate.  They can believe a boxer might throw a fight, or a basketball player might throw a game; but in American politics?—heavens no, it could never happen!  And don’t even bring up the subject of 9/11 to them because they are sick to death of hearing about it.  They have never really listened; but they have heard the subject brought up ad nauseum, and dismissing it now is as easy as batting away a fly, and just as automatic—-a Pavlovian response.  They have never listened; they have never looked at the facts of the case.  This is the sheer power of perception management: it can cause people to shut their eyes and stop up their ears against certain information that conflicts with the mainstream message—information which threatens to confuse them and shake their confidence in their understanding of the world, and also to shake their self-esteem as sensible, mainstream people who do not subscribe to nutty ideas.

Veterans Today you’ve got a lot more work to do.

ABOUT THE AUTHOR: Cassandra has a BA in psychology and also an MSW degree. She does a little writing, a lot of reading, and is an avid gardener. She works occasionally for a small publisher in her hometown, and dabbles in herbal medicine, medical issues and natural sciences.