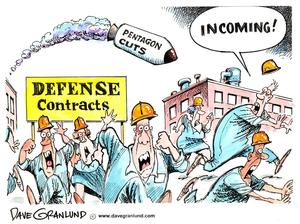 I noted in my last commentary on defense spending that  this post would be on what critics who oppose steep defense cuts have to say in what they label as ‘Doomsday’ defense cuts.

It is remarkable how politicians with close ties to the Defense Industry love to demonize and label any significant cuts to our defense budget with terms like DOOMSDAY.

Fearing a return to the Peace dividend days of the First Bush and Clinton administrations, defense spending advocates began writing OP EDs and articles in an attempt to circle their wagons against the threat of another so-called Peace Dividend should we pull the bulk of our troops out of Iraq and Afghanistan any time soon.

It doesn’t take a Wall Street Broker or Economist for readers to understand what makes sense. How can we have any dividend when we have not paid into the stock or investment program called DEFENSE?

Our wars and occupations of Iraq and Afghanistan have never been paid for by raising war bonds (as during WWI), or a war tax (beginning with the American Civil War).

Just like about everything else included in the US debt ceiling, borrowing funds for the wars has been largely on loan from foreign nations, including Communist China.

According to AP reporter Marc Levy, “For the dozen lawmakers tasked with producing a deficit-cutting plan, the threatened “doomsday” defense cuts hit close to home.

The potential for $500 billion in defense cuts could force the Pentagon to cancel or scale back multibillion-dollar weapons programs. That could translate into significant layoffs in a fragile economy, generate millions less in tax revenues for local governments and upend lucrative company contracts with foreign nations.

The cuts could hammer Everett, Wash., where some of the 30,000 Boeing employees are working on giant airborne refueling tankers for the Air Force, or Amarillo, Texas, where 1,100 Bell Helicopter Textron workers assemble the fuselage, wings, engines and transmissions for the V-22 Osprey tilt-rotor aircraft.

Billions in defense cuts would be a blow to the hundreds working on upgrades to the Abrams tank for General Dynamics in Lima, Ohio, or the employees of BAE Systems in Pennsylvania.

For committee members such as Sens. Patty Murray, D-Wash., Rob Portman, R-Ohio, and Pat Toomey, R-Pa., the threat of Pentagon cuts is an incentive to come up with $1.5 trillion in savings over a decade. Failure would have brutal implications for hundreds of thousands workers back home and raise the potential of political peril for the committee’s 12.

“I think we all have very good reasons to try to prevent” the automatic cuts, Toomey told reporters last week when pressed about the impact on Pennsylvania’s defense industry. “That is not the optimal outcome here, the much better outcome would be a successful product from this committee.”

The panel has until Thanksgiving to come up with recommendations. If they deadlock or if Congress rejects their proposal, $1.2 trillion in automatic, across-the-board cuts kick in.

Up to $500 billion would hit the Pentagon.

Those cuts, starting in 2013, would be in addition to the $350 billion, 10-year reduction already dictated by the debt-limit bill approved by Congress and signed into law by President Barack Obama this month. 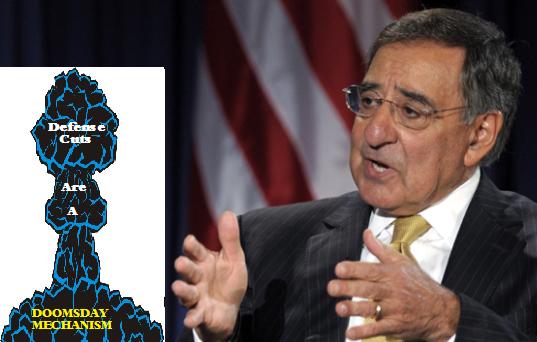 Not surprisingly, Defense Secretary Leon Panetta has described the automatic cuts as the “doomsday mechanism.” He’s warned that the prospect of nearly $1 trillion in reductions over a decade would seriously undermine the military’s ability to protect the United States.

For the Pentagon, “we’re talking about cuts of such magnitude that everything is reduced to some degree,” said Loren Thompson, a defense analyst at the Lexington Institute, a [conservative] think tank. “At that rate, you’re eliminating the next generation of weapons.”

Veterans Today Note: Within the mission statement of the conservative Lexington Institute think tank is a focus on the international projection of American military power to promote and protect DEMOCRACY (hum), “By promoting America’s ability to project power around the globe we not only defend the homeland of democracy, but also sustain the international stability in which other free-market democracies can thrive.”

As chairman of the Senate Foreign Relations Committee and a possible successor to Secretary of State Hillary Rodham Clinton if Obama wins a second term, Sen. John Kerry is certain to be protective of the budget for the State Department.

Yet the Massachusetts Democrat…represents a state that was fifth in the nation with $8.37 billion in defense contracts this year, behind Virginia, California, Texas and Connecticut, according to data on the federal government’s website USAspending.gov.

In Tewksbury and Andover, Mass., deep defense cuts could have serious ramifications for thousands of Raytheon employees working on the Patriot, the air and missile defense system. It was heralded for its effectiveness during the 1991 Persian Gulf War and is now sold to close to a dozen nations, including South Korea, Taiwan and the United Arab Emirates.

Whatever decisions Kerry and the committee make will affect Massachusetts-based Raytheon, which was fourth in defense contracts this year at $7.3 billion, behind Lockheed Martin, Boeing and General Dynamics. Raytheon also has operations in Arizona, home to another committee member, Republican Sen. Jon Kyl.

In February, Senator Patty Murray celebrated when the Air Force ended a decade-long saga of delays and missteps and awarded one of the biggest defense contracts ever, a $35 billion deal to build nearly 200 air refueling tankers, to Boeing, a mainstay in her home state.

Boeing was fourth on the list of [political campaign] donors to Murray from 2007-2012, with its political action committee, individual employees and family members contributing $102,610.

Michigan is home to two committee members, Republican Reps. Dave Camp and Fred Upton, and General Dynamics work on the Abrams tank. The state is struggling with a 10.5 percent unemployment rate, which is above the national average.

Already facing the prospect of $350 billion in defense cuts over 10 years, the Pentagon could look to scale back some projects, such as the F-35 Joint Strike Fighter, the stealthy aircraft that has been plagued by cost overruns and delays.

Lockheed Martin, in conjunction with Northrop Grumman and BAE Systems, is building 2,400 of the next generation fighter jet for the Air Force, Navy and Marine Corps, as well as working with eight foreign countries. But the cost of the program has jumped from $233 billion to $385 billion; some estimates suggest that it could top out at $1 trillion over 50 years.

Questioned about the defense cuts, Joint Chiefs of Staff Chairman Adm. Mike Mullen recently said that “programs that can’t meet schedule, that can’t meet cost … requirements are very much in jeopardy and will be very much under scrutiny.”

The Joint Strike Fighter is being built in Fort Worth, Texas, and Palmdale and El Segundo, Calif. Those are the states of committee members Reps. Jeb Hensarling, R-Texas, and Xavier Becerra, D-Calif. Lockheed Martin and BAE Systems also have operations in Pennsylvania.

The Pentagon could decide to scrap the program or scale it back while upgrading the existing F-15 and F-18 aircraft, a troubling prospect for lawmakers from the states that benefit from F-35 production.

In the military world, however, reducing the number could make it more costly.

“The problem when you cut back in numbers is you increase the number for one, you increase the cost for one,” said Laicie Olson, a senior policy analyst with Council for a Livable World and the Center for Arms Control and Non-Proliferation. “Sometimes it’s almost better to buy more.”

Boeing, in a statement, said it has been “anticipating flattening defense budgets for some time.” Company spokesman Daniel C. Beck said that while Boeing is trying to improve production and efficiency, it’s moving into new markets such as cyber-security and energy management.