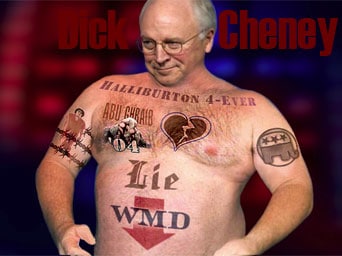 America’s Greatest Con Man, the Real Darth Vader of Our Generation, Makes One Last Attempt To Zap Us With His Deceitful Death Star as He Tells Us What to Believe

“Jerry, just remember, it’s not a lie if you believe it,” said George Costanza to Jerry Seinfeld on the 1990s show Seinfeld when asked how’d he do it; meaning how’d he lie with a straight face.

And so here we go with the Former Vice-President of the United States Dick Cheney as he attempts to peddle his new book “In My Time: A Personal and Political Memoir“; attempting to revise history just one more time before he goes into the long dark night of history.

Will it work?  Will you believe his version of history?

Well, for this writer and many of my colleagues, we simply ask how does he do it.  How does he lie with a straight face?

The answer is that he either watched a lot of Seinfeld and learned from George Costanza or he’s a classic Machiavellian sociopath who has no problem whatsoever doing whatever it takes to get in and remain in power.  Now the romantic in me hopes he just admires George Costanza but really, we all know it’s the latter.

I mean the evidence is overwhelming and we can go into all the details of his 8 years in power but really, we need to examine what kind of society we are that would allow such a Darth Vader Sith-like character to have a seat at the leadership table for so long.  Ouch!

Before the Bush administration, while the country was not perfect, it did have its international prestige and integrity intact.  After 8 years of Dick Cheney and his assigns, the USA was in serious taters beaten up by their agenda from top to bottom; a disgrace!

We had 2 major life-altering torturing wars dirty pitched to us using fake hyperbolic evidence made from yellowcake sprinkled with bald-faced lies, deceit, and misinformation ending up in the biggest recession since 1929; a complete massive meltdown.  Why?

The American people were robbed of freedoms, liberty, economy, and prestige and this strange weirdo keeps selling us the lie so we can honor him just after he raped us without vaseline!  Really?  Memo to Dick: enough with the dry fornication already!

Like all rapists, it was always good for him and his assigns!  But for the rest of us and our children who have to inherit this legacy, hell no! It was a terrible horrific disaster; a wholesale selling of the once proud and important American values that set the USA apart as a brilliant light for those aspiring to be….instead, we ended up the ugly bully on the block who lies, steals and rapes; nothing to look up to and everything to hate dead broke on the road to ruin.

Finally, it should be noted that this article is NOT a review of the book but an encouragement to readers who feel compelled to get a copy and read it; just make sure you question everything and fact-check it all because sociopaths are compulsive liars and this lunatic is in a class all by himself.

I mean it’s good to know what’s inside the man’s mind as he manipulates the reader into believing he’s some sort of respectable citizen of the tribe.   Maybe share it with your older children who want to know why their education is being cut or why they won’t have the same opportunities you once had.  You may want to take it easy when you explain to the kids that we were raped blind and the rapist handed them the bill.

As it goes, this globalist posing as an American is a straight-up unprosecuted war criminal who sent American children to war for his prophets whilst he cowardly deferred.  What was it?  5 times?  Heck, he’s the best con man American has ever seen because he did it in your face with such contempt…..and so it goes.  What a Dick!