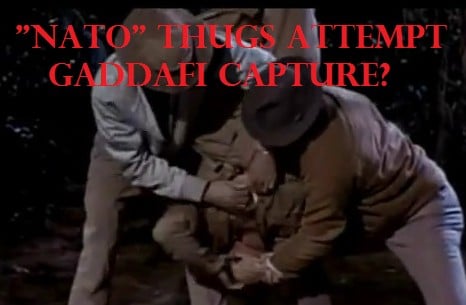 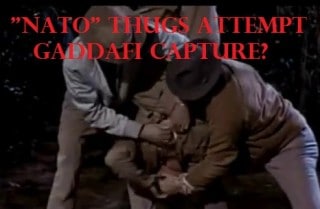 Convoys, crossing a thousand miles of sand, are entering the nation of Niger, said by US counter-terrorism officials to be the staging ground for Al Qaeda in Africa.  This was also where Gaddafi’s mercenary army was recruited from by Israeli contractors as negotiated by his son, Saif, during his March visit to Tel Aviv.

Now Gaddafi’s Security Chief, and other top officials, thought to have been in Sirte, proclaimed by Gaddafi as “Capitol of New Libya” have fled the country.  From the Associated Press;

But as the first group of a dozen vehicles pulled into Niger’s capital Niamey on Tuesday, a customs official confirmed that it included Mansour Dao, Khadafy’s security chief and a key member of his inner circle, as well as around 12 other Khadafy regime officials. The official, Harouna Ide, told The Associated Press that other Libyan convoys had passed through Agadez, a town about halfway between Niger’s border with Libya and its capital in the far southwest.

Estimates on the ground are that this is an ‘advance guard’ to cover Gaddafi’s withdrawal from Libya when and if Sirte and other towns in Gaddafi’s home tribal region, surrender to the new Tripoli government.
Niger is the political refuge of Boko Harum, the terrorist organization claiming credit for recent attacks in the Nigerian capitol of Abuja.  This statement from Reuters:

Nigerian authorities investigating last week’s fatal bombing of the U.N. headquarters arrested two members of Islamist sect Boko Haram a week before the attack and said they suspect a third member with an al Qaeda connection led the plot. “Investigation has revealed that one Mamman Nur, a notorious Boko Haram element with al Qaeda links who returned recently from Somalia, working in concert with the two suspects, masterminded the attack on the United Nations building in Abuja,” the Department of State Services said in a statement on Wednesday.

During the spring offensive in Libya that eventually removed the Gaddafi regime, it was a prime directive from Libyan intelligence to government financed press/blogger “embeds” to tie forces representing the new government to Al Qaeda.  However, Gaddafi’s mercenaries captured along the months long drive to take Tripoli were most often, not just from Niger but members of the Boko Harum sect, an offshoot, according to those who are paid to report such things, of Al Qaeda.
Thus, absurdity of absurdities, Gaddafi’s transitional government in exile has taken up residence among what he, himself, has labeled “Al Qaeda” factions.
What can be predicted is that, with luck, Gaddafi himself, will hold on a few more weeks, while the new government increasingly isolates Gaddafi followers.  During that time, Gaddafi will be able to access his billions invested with US based defense and oil companies and look for safe haven within the weakest and most corrupt regions of Subsaharan Africa where his dreams of “Call Me Bwana” may still have hopes.
Video:  Gaddafi, played by Bob Hope, saved from Mussolini’s fate by Eddie Adams: