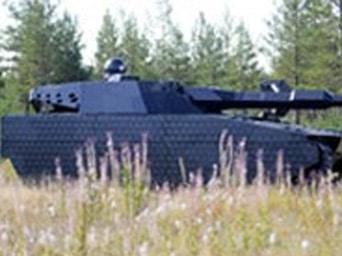 ÖRNSKÖLDSVIK, Sweden, Sept. 7, 2011 — A new invisibility “cloak” gives Harry Potter a run for his magic by giving a vehicle — even a moving one — the ability to blend into its surroundings or mimic other objects, such as a cow. The device, developed by BAE Systems, can work across several frequencies and will be displayed in infrared mode on the company’s CV90 armored vehicle at the UK Defence and Security Equipment International exhibition later this month.

Dubbed Adaptiv, the patented cloaking technology is based on sheets of hexagonal pixels that can change temperature very rapidly. Cameras mounted in the vehicle scan the background scenery and display that infrared (IR) image on the vehicle, allowing even a moving tank to match the thermal signature of its surroundings. Alternatively, it can mimic another vehicle or display identification tags, reducing the risk of friendly fire.

The current system highlights its utility in the IR, as this is most important to the Swedish Defence Materiel Administration, which is funding part of the work. However, engineers at BAE Systems of 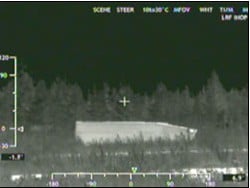 The CV90 when viewed in the IR spectrum with the Adaptiv system deactivated.

Farnborough, England, have combined the pixels with other technologies to provide camouflage in other parts of the electromagnetic spectrum at the same time for multiplexed stealth ability; this capability will be developed further over the next few years.Trials by BAE Systems in mid-July showed that one side of a CV90 could be made effectively invisible or appear to be other objects, including a 4×4 vehicle, when viewed in the IR. “The tank skin essentially becomes a big infrared TV,” BAE Head of External Communications Mike Sweeney told Wired.co.uk. “You can display anything you want on it — including a cow — while the rest of the vehicle blends into the background.”The Adaptiv CV90 “pretending” to be a car after grabbing the image with its own electro-optical sensors, processing it and displaying it on the side of the vehicle.

“Earlier attempts at similar cloaking devices have hit problems because of cost, excessive power requirements or because they were insufficiently robust,” said project manager Peder Sjölund. “Our panels can be made so strong that they provide useful armor protection and consume relatively low levels of electricity, especially when the vehicle is at rest in ‘stealth recce’ [reconnaissance] mode and generator output is low.” For more information, visit: www.baesystems.com