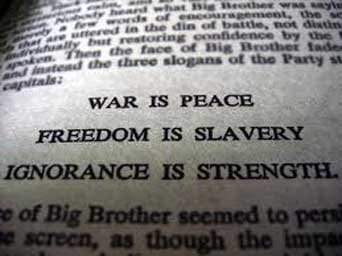 Orwell’s quote ‘Ignorance is Strength’ means that in keeping the people ignorant of the facts, distracted or numbed down ~ the government will be even more powerful and less likely to be overthrown. Nowhere is that more apparent than the official 9/11 conspiracy story which Orwell predicted and we are now unfortunately experiencing

“Don’t you see that the whole aim of Newspeak is to narrow the range of thought?.. Has it ever occurred to you, Winston, that by the year 2050, at the very latest, not a single human being will be alive who could understand such a conversation as we are having now?… The whole climate of thought will be different. In fact, there will be no thought, as we understand it now. Orthodoxy means not thinking ~ not needing to think. Orthodoxy is unconsciousness.” ~ George Orwell, 1984, Book 1, Chapter 5

Memo to The Ignorant: Orwell was right / Ignorance is strength.

What better way to sum up the thoroughly discredited official 9/11 conspiracy story than with a brilliant five minute video ~ which tells you everything you need to know in order to maintain your blissful ignorance about the official 9/11 story ~ a story which is slowly but surely being eroded by the truth.

Your numbers are still strong but your blind faith in the government is badly shaken for two wars and two illegal occupations are rapidly draining the economy ~ plus the sad realization that you, the tax payer, are paying for them ~ and all in the name of the 9/11 inspired war on terror.

But you were told by your president that war is really peace, after all he received the Nobel Peace Prize, but somehow even you are now realizing that your precious freedoms are being slowly nibbled away.

The very thought that your loss of freedom might mean slavery to an oppressive police state based on fear is something you don’t want to dwell on ~ too depressing. Of course it doesn’t particularly bother you that the National Security Agency (NSA) has dramatically turned its ears and surveillance on the American public itself.

But 9/11 still gnaws at you, admit it ~ you ask yourself why are the Wall Street banksters getting bailed out and making so much money on these 9/11 induced wars while you are living paycheck to paycheck and barely surviving.

Maybe you need to take another hard look at the official 9/11 conspiracy story to fortify your ignorance ~ before you finally succumb to the rapidly emerging and unsettling truth that you have been bamboozled, as Orwell predicted.

5 minute must see video ~ Everything you ever wanted to know about the 9/11 conspiracy theory in under 5 minutes. A fast paced and ironic summation of the events surrounding the events of 9/11/01. If you still believe the official story after watching this, you’re a true believer and secure in your ignorance.