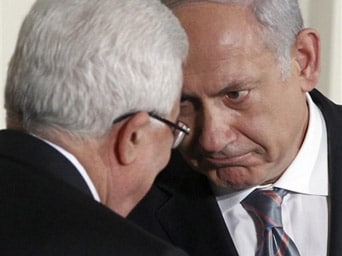 If the drama about to happen at the UN assists the process of truth-telling, this Palestinian initiative will have been worthwhile.

The main difference between Netanyahu and Abbas was that the Israeli leader could not say “Yes” to President Obama and the Palestinian could not say “No”.

But the drama about to unfold at the UN in New York indicates that Abbas, better late than never, has discovered his testicles – both of them if he goes all the way with his insistence that the Palestinian request for UN recognition as a member state must be presented to the Security Council, but only one of them if he settles for a vote in the General Assembly and spares Obama the embarrassment of having to cast another veto which would fully expose the  president’s sick-making hypocrisy (the consequence of his fear of confronting the Zionist lobby) and his administration’s double standards.

As I write I find myself wondering if in an event in Ramallah on 28 July was Abbas clearing his deck to be able to say “No” to Obama. On that day Fatah security forces surrounded and raided the home of Mohammed Dahlan. They arrested 23 of his bodyguards and confiscated their weapons. Could Abbas have feared that if he continued to defy the Obama administration by proceeding with his UN initiative, Dahlan would lead an American-encouraged and Israeli-supported coup against him? (It’s not much of a secret that Dahlan is a CIA asset and a Mossad collaborator. Until 2007 he was Fatah’s security chief in the Gaza Strip where he was preparing to lead an American-requested and an Israeli-supported operation to smash Hamas. It didn’t happen because Hamas got wind of the plot and moved pre-emptively against Dahlan and his Fatah forces. In June of this year he was expelled from Fatah for his criticising Abbas in meetings with activists. That would have disappointed those of Israel’s leaders who were were hoping that Dahlan would emerge as the Palestinian leader to do their dirty work and use whatever force was necessary to compel the Palestinians to accept crumbs from Zionism’s table – a Palestinian “state “ of three or four Bantustans).

It’s reasonable to speculate that Abbas will emerge from the forthcoming UN session with General Assembly recognition of Palestine as a non-voting member or observer state, but will that be a reason for hope that the Palestinian cause can at last be advanced where it matters – on the ground?

One man who apparently sees a ray of hope is the eminent, German-born, American Jewish Henry Siegman; eminent because he’s the president of the U.S. Middle East Project having previously been a member of the Council On Foreign Relations and before that the executive director of the American Jewish Congress. In an article for Forward under the headline “September Madness” he asked two questions.

The first was this.

“Is there anyone familiar with the history of the Israel-Palestine peace process who still believes that this Israeli government would defy the over half-a-million settlers in the West Bank and East Jerusalem – by far the most influential political force in Israel – and their networks of supporters within Israel, and present Palestinians with a reasonable peace plan for a two-state solution…?”

The second was this. “And is there anyone who witnessed the frenzied applause that greeted Prime Minister Benjamin Netanyahu’s most recent speech before the U.S. Congress in which he left no doubt about his government’s intentions for East Jerusalem and for the West Bank, or heard President Obama’s assurances to AIPAC’s conventioneers that the ties that bind the U.S. to Israel are forever “unbreakable,” who still believes that the U.S. will ever exert the kind of pressure on Israel that will finally change its cost/benefit calculations with regard to its colonial project?”

Siegman’s own answer to that question was this. “The contrast between America’s reaction to Israeli and Palestinian transgressions dramatically illustrates the futility of relying on the U.S. to present the parties with a fair and balanced framework for a final status solution and then using its considerable clout to see to its implementation. Instead, the U.S. can be counted on to make the protection of Israel’s interests – as defined even by its most reactionary and xenophobic governments – its first priority. The U.S. Congress, if not the White House, will see to that.”

So what is the ray of hope Siegman sees?

He put it this way. “President Abbas and his supporters have reason to be confident that in refusing to withdraw their U.N. initiative they have chosen the right course. For Palestinians, as well as the international community, must come to terms with the hard reality that a two state solution will have to be achieved not only without U.S. help but in the face of its opposition. A General Assembly resolution affirming the Palestinians’ right to statehood within the 1967 borders and granting them “non-member state” observer status will not produce immediate progress in ending Israel’s occupation. But it is likely to trigger a global reaction to Israel’s continuing efforts to dispossess Palestinians from the 22% of Palestine that has been left them. That reaction will have a far better chance of bringing Israelis back to their senses, and to the values of the Jewish state’s founders, than any of America’s feckless efforts have to date.”

Put more bluntly what Siegman is saying is that the drama about to happen at the UN will assist the process of isolating Israel as a pariah state and that at a point this process – the rising global tide of anti-Israelism – might bring Israeli Jews, enough of them, to their senses.

My problem with that analysis is that it applies reason to the Jewish citizens of a state who are, most of them, beyond reason, brainwashed by Zionist propaganda and needing to believe they are the victims when they are the oppressors.

But I remain committed to the view that there is a way to confront and defeat Zionism. It is by empowering the citizens of nations, the Western nations in particular and America especially, with the truth of history, in order to enable them to make their democracies work for justice and peace in the Middle East. I believe that if President Obama gets a second term, he will welcome such assistance in order to have a chance of breaking the power of the Zionist lobby and its stooges in Congress.

If the drama about to happen at the UN assists the process of truth-telling, this Palestinian initiative will have been worthwhile.

Netanyahu calls for talks with Palestinians