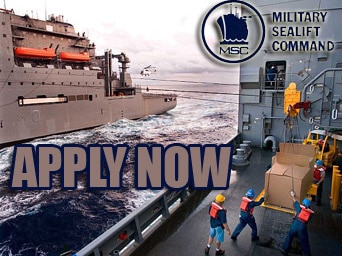 The Military Sealift Command has recently renewed for a fifth year with their partnership to Hire Veterans.  They continue offering exciting career opportunities to our Veterans.  “Feel the pride of serving your country without making a service commitment.”  With MSC there is not such thing as an ordinary day.  They offer excellent federal civil service benefits, exciting visits to foreign ports or call and numerous promotion opportunities that allow you to build a rewarding career in support of our nation’s defense.

The MSC is a United States Navy organization that controls most of the replenishment and military transport ships of the Navy.  It was created on July 9th, 1949 when the they became solely responsible for the Department of Defense’s ocean transport needs.

Military Sealift Command ships are civilian manned, and are referred to as being in service, rather than in commission.  There are four programs that comprise Military Sealift Command: Sealift, Naval Fleet Auxiliary Force (NFAF), Special Mission, and Prepositioning.  The Sealift program provides the bulk of MSC’s supply-carrying operation and operates tankers for fuel trasport and dry-cargo ships that transport equipment, vehicles, helicopters, ammunition, and supplies.  The NFAF’s role is to directly replenish ships that are underway at sea, enabling them to deploy for long periods of time without having to come to port.  The Special Mission program operates vessels for unique military and federal government tasks, such as submarine support and missile flight data collection and tracking.  The Prepositioning program sustains the US military’s forward presence strategy by deploying supply ships in key areas prior to actual need.

Military sea transportation has been around as early as 1847.  The US Army and US Navy chartered American merchant ships separately.  After the Mexican-American War it was recommended that the Navy be given responsibility for all water transportation requirements for the military.  However, each service managed their own sea transportation throughout the nineteenth century and both World Wars.  Former Secretary of Defense, Louis Johnson, issued a memorandum on July 12th 1949 which detailed service responsibilities and the funding for the Military Sea Transportation Service which later became named the Military Sealift Command in 1970.

If an exciting maritime career sounds interesting to you, then please visit Hire Veterans to view their available positions.  We also invite you to check out the MSC’s official website for more information about their programs and careers.  Come join a tradition in supporting our nation’s defense that has been going on for over 100 years.  You will be helping to provide strength to our nationa’s defense, while enjoying a rewarding career and seeing the world at different ports.

John Vogel is a recruiting consultant with HireVeterans.com, a major job board for U.S. Veterans.