Home Government Obama’s Re-Election Chances May Be Fading, And So What? 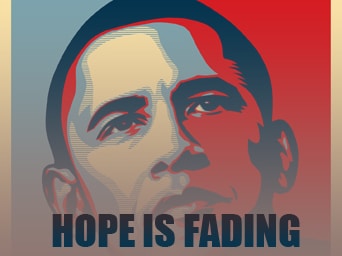 Unless President Obama breathes life into a massive New Deal-type jobs and reconstruction effort, now, and not in some vague Tomorrow, his chances for re-election, will shrivel. (Not that I care: I plan to vote Green.) That’s because this presidential campaign early on gives every appearance of one that will be fought out largely on domestic issues as the candidates appeal to voter self-interest. In all the Republican debates and Democratic oratory until now, it’s been rare to catch a word about USA’s engulfing the Middle East and Africa in wars to steal their energy resources.

Thus, the campaign talk is all-about rebuilding American infrastructure—not about restoring Iraq’s infrastructure that we destroyed in an illegal war. The talk is about finding jobs for long-term unemployed Americans—-not about the Depression-level unemployment we created in Iraq. Americans seem indifferent to the fate of those we are destroying overseas with our brilliant killing machines. And maybe that’s not surprising as the six wars we are waging get so little media play. We think we can commit crimes against humanity and walk away from them—and so we do.

Last night’s commentators on MSNBC television waxed eloquent about Mr. Obama’s  “tough talk” on creating jobs. It is as though they forgot this is the same man who talked like a liberal during his initial run for the White House but largely acted like any reactionary once elected. His pledge to get out of Iraq is visibly undercut by U.S. construction of a gigantic embassy-fortress in Baghdad. The U.S. has subjugated Iraq and intends to rule it until the last drop of oil has been squeezed from its soil.

It must be remembered that President Obama is a creature of the Central Intelligence Agency, the foremost international criminal organization in the world today; that his college loans were paid for by the CIA and that he got his first job after college from the CIA. And the CIA has long aligned itself closely with grasping oil firms out solely to plunder and profit—and who are reaping sensational war-time profits at this hour—the world’s motorists and homeowners be damned. It needs to be understood those 900 bases the Pentagon has built are not for defense, but for offense, to control every region of the planet, as the latest deals with Colombia and Australia reveal.

So Mr. Obama is hardly a president deserving of re-election. Consumer advocate Ralph Nader is right when he urges Democrats to challenge Obama in the upcoming primaries. Since Obama’s foreign policy is identical to that of his Republican critics and his domestic policies have flopped, there is no better time to consider Green Party or libertarian alternatives.

Under Mr. Obama’s tyrranical stewardship, the U.S. empire is expanding abroad as its policies are pauperizing Americans at home. Only yesterday, the New York Times reported more than one in three young families with children, 37 percent, are living in poverty. True unemployment is closer to 20 percent than 10 percent and there are four or five job-seekers for each available opening while more than 40 million people are living in poverty and like numbers are living on food stamps and nearly 100 million have housing problems. With a Congress made up primarily of the well-to-do, if not the millionaire class, and who are willing handmaidens of the corporate elite, USA is no longer a government of, by and for the people. The people wrote in 100 to one against a bailout and Congress ignored them.

In his Inaugural Address of 1937, President Franklin Roosevelt said, “I see one-third of a nation ill-housed,” a condition that seems likely to repeat itself. “I see millions denied education, recreation, and the opportunity to better their lot and the lot of their children,” FDR added, and those words resonate again as school teachers are laid off by the tens of thousands, as libraries are shut down for lack of funds, as State and municipal services are abandoned in favor of feeding the Pentagon’s military machine. And so ends the American dream—not with a whimper but with a bang.

Sherwood Ross runs a public relations firm for worthy causes and writes on political and military topics. Reach him at [email protected]