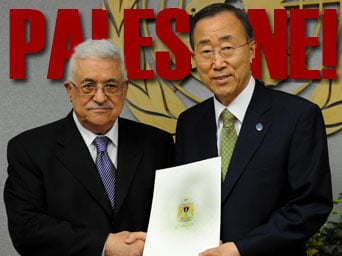 Just think for a minute—what would happen if the United States abstained when the Palestinian question comes before the UN Security Council ?

Ed Note / Debbie Menon: Yes.  President Obama is facing another Catch-22 issue of his career, which is going to turn into a huge embarrassment for him and every American with “an iota of logic or conscience.”  He has failed each and every one he has been confronted with so far. The fact that this is a bit bigger than all of the previous ones, is hardly significant. He has long ago shown the color of his spots….

The only thing left intact it seems is Ambassador Charles Ceci’s apparent belief in his President after all.

By the end of the week perhaps he will have been shocked to find out just how much of a morally bankrupted leader his President actually is.

The support of the countries of the world for our endeavor is a victory for truth,freedom, justice, law and international legitimacy, and it provides tremendous support for the peace option and enhances the chances of success of the negotiations.”

Your support for the establishment of the State of Palestine and for its admission to the United Nations as a full member is the greatest contribution to peacemaking in the Holy Land.”

Just think for a minute—what would happen if the United States abstained when the Palestinian question comes before the UN Security Council in the next week or two?

The resolution would pass. The world would be stunned. The United States would enter an entirely new era in our relations with the Muslim countries of the world. The vision you outlined in Cairo for better relations with the Islamic world would take the largest step forward of your presidency. The United States would once again have regained the high moral ground we so often claim to occupy. The energies loosed by the “Arab spring” would continue to be devoted to their own domestic affairs rather than being diverted into condemning the United States. We are hypocrites when we claim to want justice for the Palestinians but we do nothing meaningful to help achieve this.

On the other hand, if the United States vetoes the Palestinian request for statehood, we will damage our position in the Islamic world—not merely the Arab World—for untold years to come. We will become the object of retribution throughout the Muslim world, and will give new energy to the lagging efforts of al-Qaida to retaliate against us. I served my country 36 years in the Foreign Service of the United States, ten assignments in ten Muslim countries. I know the power of this issue. Why would we want to give new impetus to anti-American sentiment throughout the Muslim world?

Mr. Netanyahu’s office has issued a statement saying “Peace will be achieved only through direct negotiations with Israel.” You know, and I know, that Mr. Netanyahu has no intention of concluding a just and fair peace with the Palestinian Authority. His only concern is to continue the inexorable construction of more settlements, creating more “facts on the ground” until the idea of an independent Palestinian state becomes a mere memory of a bygone era. When Israel declared its independence in 1948 it did not do so after direct negotiations with Palestine. If Israel really wants to negotiate with the Palestinians, why would negotiating with an independent Palestinian government, on an equal footing, deter it from engaging in these negotiations?

The Reagan administration launched an international information campaign under the slogan “Let Poland be Poland.” It’s time we let Palestine be Palestine.

Abstain from this upcoming vote. Just think about it.

Sincerely yours, Charles O. Cecil U.S. Ambassador, retired
(Ambassador to the Republic of Niger during the Clinton Administration)

Write or Telephone those working for you in Washington. The final vote is not expected to take place for more than a month.

E-mail Congress and the White House