Mr Sarkozy argued that the Palestinians should bypass the Security Council and instead ask to be admitted as an observer state to the General Assembly. He warned that the use of the US veto would probably spark violence in the Middle East. Mr Obama refused to engage with reporters on Mr Sarkozy’s position.

IN WHAT appeared to be a bold European move to wrest control of the Middle East peace process from Washington’s hands, French President Nicolas Sarkozy pointed to the failure of US diplomacy as Palestinian Authority President Mahmoud Abbas prepared to submit an application for full membership of the United Nations to the Security Council.

The Palestinian Authority has now indicated it won’t push for an immediate vote in the 15-member Security Council, where it doesn’t yet have the required nine votes.

”We will give some time to the Security Council to consider first our full membership request before heading to the General Assembly,” Palestinian negotiator Nabil Shaath told reporters. ”If we fail, we will keep knocking on the door. We do not have a time limit.”

Diplomats from the US and Israel are working around the clock to keep votes for the Palestinians in the Security Council at less than nine, the point at which Washington would be forced to exercise its veto. Israeli Prime Minister Benjamin Netanyahu arrived in New York early on Wednesday, reportedly to meet all 15 Security Council members ahead of the Palestinians’ putting their case today.

In his speech to the General Assembly, President Barack Obama insisted that Palestinian statehood could only come from continued negotiations with Israel. He told a packed assembly hall: ”Let’s be honest – Israel is surrounded by neighbours that have waged repeated wars against it. Israel’s citizens have been killed by rockets fired at their houses; and suicide bombs on their buses. Israel’s children come of age, knowing that throughout the region other children are thought to hate them.

”Israel, a small country of less than 8 million people, looks out at a world where leaders of much larger nations threaten to wipe it off the map. The Jewish people carry the burden of centuries of exile, persecution, and the fresh memory of knowing that 6 million people were killed simply because of who they were.” In the audience Mr Abbas dropped his head into his hands three times during a speech that Palestinian delegates were concerned contained no acknowledgment of Palestinian suffering and which one of the Palestinian leader’s colleagues described as ”a disaster”.

Daniel Levy, a former peace negotiator in the government of Israeli prime minister Ehud Barak, said the speech showed that the US President was boxed in by domestic politics and a pro-Israel Congress.

”There is virtually no thread of reason running between the way he related to the rest of the world and its developments, particularly in the Middle East, and the positions he espoused on Israel-Palestine,” said Mr Levy, now director of the Middle East Task Force at the New America Foundation. 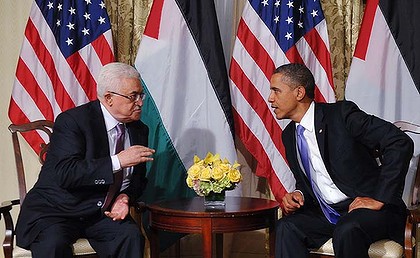 ”Palestinian freedoms, rights and self-determination are somehow supposed to be attained without the recourse to leverage, international law, or meaningful international support, considered to be necessary and legitimate virtually everywhere else.”

Mr Netanyahu, who was not present to hear the speech, said that Mr Obama should consider it a ”badge of honour”.

Mr Sarkozy called for a new multilateral initiative, based on a timetable that would see the borders of a Palestinian state agreed within six months and a final deal within a year.

In a blunt rejection of Washington’s management, he declared: ”We can wait no longer. The [US] method is no longer working. Change the method – cease believing that a single country or a small group of countries can solve a problem of such complexity.”

Mr Sarkozy argued that the Palestinians should bypass the Security Council and instead ask to be admitted as an observer state to the General Assembly. He warned that the use of the US veto would probably spark violence in the Middle East. Mr Obama refused to engage with reporters on Mr Sarkozy’s position.