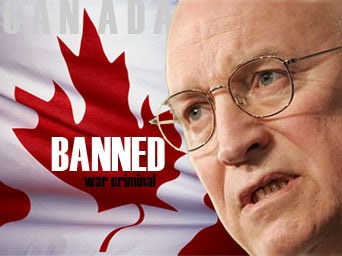 Finally, Elected Politician Has Balls to Take on Dick

The federal NDP’s immigration critic outlined the case why Cheney should not be allowed to waltz into town based on the Immigration and Refugee Protection Act.

Davies cited Section 35 of this law, which states in part that a foreign national is inadmissible for entry into Canada if the person is “a prescribed senior official in the service of a government that, in the opinion of the Minister, engages or has engaged in terrorism, systematic or gross human rights violations, or genocide, a war crime or a crime against humanity within the meaning of subsections 6(3) to (5) of the Crimes Against Humanity and War Crimes Act”.

A lawyer, Davies also cited Section 36 of IRPA that provides in part that a person is also inadmissible if the individual was responsible for “an act outside Canada that is an offence in the place where it was committed and that, if committed in Canada, would constitute an offence under an Act of Parliament punishable by a maximum term of imprisonment of at least 10 years”.

Davies said that he wrote Conservative Immigration Minister Jason Kenney today to remind the federal government that it has the responsibility to “uphold the law”.

According to Davies, the former American vice president has openly and unapologetically admitted that he did not stop acts of torture perpetrated against perceived enemies of the U.S.
Davies said that he considers practices like waterboarding, or simulated drowning, and sleep deprivation as acts of torture.

“Torture is a serious crime. It is a war crime. It is a crime against humanity,” said Davies, who was enthusiastically applauded after delivering his statement.

Don Davies Member of Parliament for Vancouver Kingsway and NDP Immigration and Citizenship critic has made a written request that Minister Jason Kenney,

“…deny entry to Mr. Cheney on grounds of inadmissibility under IRPA [Immigration and Refugee Protection Act] for having engaged in acts of torture. In the event that you do not do so, I would respectfully request that a report be prepared setting out the relevant facts, and that you refer same to the Immigration Division for an admissibility hearing with a view to issuing a removal order against Mr. Cheney, all pursuant to section 44 of the IRPA.”

MP Don Davies released copies of this September 23, 2011 letter at a press conference today in Vancouver BC at the W2 Media Centre.

Read a copy of Don Davies letter to Minister of Immigration Jason Kenney. A video of the Press Conference is available at the link below and includes the presentations of:

Re: Enforcement of Immigration and Refugee Protection Act against Foreign National Dick Cheney

As I am sure you are aware, former United States Vice-President Dick Cheney has publicly indicated his intention to enter Canada as a guest of the Vancouver Club on or about September 26, 2011.

As the Official Opposition Critic for Citizenship, Immigration and Multiculturalism, I write to request both your immediate attention to this matter and your appropriate enforcement of all federal government obligations under the Immigration and Refugee Protection Act (“IRPA”).

Our concerns are as follows.

Section 35. (1) of IRPA declares as inadmissible to Canada a foreign national on grounds of violating human or international rights. Provisions are delineated in that section that set forth specific grounds of inadmissibility, including:

• Committing an act outside of Canada that constitutes an offence referred to in sections 4 to 7 of the Crimes Against Humanity and War Crimes Act;

• Being a prescribed senior official in the service of a government that, in the Minister’s opinion, has engaged in, inter alia, a war crime or a crime against humanity within the meaning of sections 6(3) to (5) of the Crimes Against Humanity and War Crimes Act.

Section 36 of IRPA further declares as inadmissible to Canada a foreign national on grounds of either criminality, or serious criminality, including:

• Committing an act outside Canada that is an offence in the place where it was committed and, if committed in Canada, would constitute either an indictable offence simpliciter or an offence punishable by a maximum term of imprisonment of at least 10 years under an Act of Parliament.

Mr. Cheney has publicly, unequivocally and on numerous occasions admitted to authorizing, approving and failing to prevent acts of torture in circumstances that engage each and every provision of IRPA quoted above. These acts include approving the use of water boarding (simulated drowning), sleep deprivation and other treatments prohibited by both Canadian and international law. Evidence that is part of the public record far exceeds the “reasonable grounds” required by the inadmissibility sections of IRPA.

Indeed, the acts of which Mr. Cheney was an integral proponent include acts of torture against a Canadian citizen, Mr. Omar Khadr.

The Supreme Court of Canada in Canada (Justice) v. Khadr confirmed that the government administration in which Mr. Cheney was a senior official engaged in treatment of prisoners in Guantanamo Bay, Cuba, that violated the Geneva Conventions, Canada’s domestic law and Canada’s international legal obligations.

The Federal Court of Canada has similarly found in Khadr v. The Prime Minister et. al. that US treatment against prisoners (and of a Canadian citizen, no less) violated the Convention Against Torture and other Cruel, Inhuman and Degrading Punishment and Treatment (“CAT”) and further that Mr. Khadr’s detention itself was illegal under international law.

I would note that Canada is a signatory to all of the above referenced international covenants, as well as the Rome Statute for an International Criminal Court. All combine to impose a legal duty on Canada to take effective measures to prevent and deal with crimes against humanity, and war crimes, wherever such crimes occur.

In sum, I would respectfully assert the following principles are self-evident in this case:

Canadian law, including IRPA, requires that we refuse entry to or detain for investigation any person or foreign national suspected of committing serious crimes, war crimes or crimes against humanity. Torture is a serious crime, a war crime, and a crime against humanity, and water boarding is torture.

Mr. Cheney has publicly admitted to playing an integral part in torture, and IRPA must be engaged accordingly.

In the event that you do not regard water boarding or sleep deprivation as torture (which I respectfully submit is an untenable position), I would assert that these acts constitute criminal acts under the Criminal Code of Canada, an Act of Parliament, both by indictment and punishable by imprisonment exceeding 10 years, respectively.

Minister, may I remind you of your own government’s initiatives this summer in which you called on the public to assist your government in removing from Canada those individuals who had engaged in serious criminality, war crimes or crimes against humanity.

May I also remind you of your own government’s actions in denying entry to British MP George Galloway. At that time you stated that:

“It’s not about words. It’s about deeds.”

Your spokesperson, Mr. Alykhan Velshi, on your behalf said:

“We’re going to uphold the law.”

Minister, the essence of just application of the law is that it is applied evenly and consistently.

I would therefore respectfully request that you deny entry to Mr. Cheney on grounds of inadmissibility under IRPA for having engaged in acts of torture. In the event that you do not do so, I would respectfully request that a report be prepared setting out the relevant facts, and that you refer same to the Immigration Division for an admissibility hearing with a view to issuing a removal order against Mr. Cheney, all pursuant to section 44 of IRPA.

As this matter is of pressing urgency, I look forward to your immediate attention and response.

Don Davies MP; Derrick O’Keefe of StopWar.ca and the Canadian Peace Alliance; Blake MacLeod of the World Federalist Movement of Canada and Gail Davidson of Lawyers against the War.

Watch and listen to the presentations

“The City of Vancouver is made up of people who want peace and have been part of the largest peace marches in Canada’s history. Vancouver is a member of Mayors for Peace and the International Peace Messenger Cities. So frankly, I am appalled that the Vancouver Club would host a know war monger. Vancouver citizens have fled wars all over the world. So why would the West Vancouver Conservative Party bring a someone like him to Vancouver? It’s unconscionable.”

* information provided by Lawyers Against the War ([email protected])