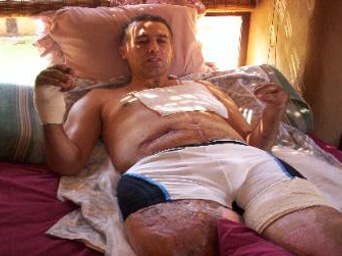 Today  Injured War Zone Contractors and Scott Bloch filed a Class Action Lawsuit against the Defense Base Act Insurance Companies and some Employers.

Scott Bloch files complaint for $2 billion against major government contractors like KBR, Blackwater/Xe, DynCorp, G4S/Wackenhut/Ronco Consulting and the global insurance carriers AIG, CNA, ACE, Zurich, on behalf of thousands of former employees, for unlawful, fraudulent and bad-faith mistreatment of injured employees and their families  Brink Vs. CNA et al The Defense Base Act Compensation blog and it’s contributors invite you to Join our Class Action here The truth will be exposed.

WASHINGTON, DC (September 26, 2011) – Since 2003, top government contractors like Blackwater, KBR, DynCorp, CSA/AECOM and ITT have been perpetrating a fraud on their employees and on the American public.  The silent warriors who work for these companies, many of them decorated former military service members, have been injured, mistreated and abandoned by the contracting companies and their insurance carriers who have been paid hundreds of millions of dollars in premiums.

“It is a grave injustice,” Bloch said, “to those who rode alongside American soldiers, including Iraqi and Afghani Nationals, to be case aside without the benefits of the law.  We are supposedly trying to bring them the rule of law.  We are supposedly trying to encourage them in democractic institutions.  We are the ones asking them to believe in justice and individual rights.  This is a travesty to all Americans and those around the world who look to America for an example of humanitarian aid and proper treatment of workers.”

This is a lawsuit for damages in the amount of $2 billion to remedy the injuries and destruction caused to the lives, finances and mental and physical well being of thousands of American families and others whose loved ones were injured while serving America under contracts with the United States.  It seeks an additional unspecified amount to punish the companies who made massive profits while causing this harm to people unlawfully and maliciously and working a fraud on the American public who paid them.

“This abusive and illegal scheme by the defendants has been allowed to go on for too long.  We are talking about loss of life, suicide, loss of homes, marriages, families split up, “ Bloch said, “and the culprits are the large government contractors who should have treated their employees better, and the mega-insurance companies who were paid a hefty sum to make sure the employees were taken care of with uninterrupted benefits in the event of injuries in these war zones.”

This complaint is filed due to actions and omissions of defendants, in conspiracy with others, and individually, to defeat the right of American citizens and foreign nationals to receive their lawful benefits and compensation under the Defense Base Act (“DBA”),  as it adopts the Longshore and Harbor Workers’ Compensation Act (“LHWCA”).

The lawsuit explains that those sued engaged under the RICO statute in an enterprise of fraudulent and or criminal acts to further their scheme to defeat the rights of individuals who have been injured or suffered occupational diseases, and death, while on foreign soil in support of defense activities under the DBA.   These acts were perpetrated repeatedly through bank fraud, mail fraud, wire fraud, using telephones, faxes, and United States mail .

“These are heroes, decorated by America’s Armed Services,” said Bloch.  “Some of the foreign contractors were decorated special forces soldiers from their countries who assisted the United States in combating threats.  The sheer disregard for human dignity and law is reprehensible and deserves punishment.  These families and many others who have been harmed need treatment, need compensation, need redress of the wrongs that have been perpetrated by these huge companies and insurance carriers for the last 10 years.  They have earned $100 billion per year on the backs of these people, with the blood of these plaintiffs and those whom they represent.”