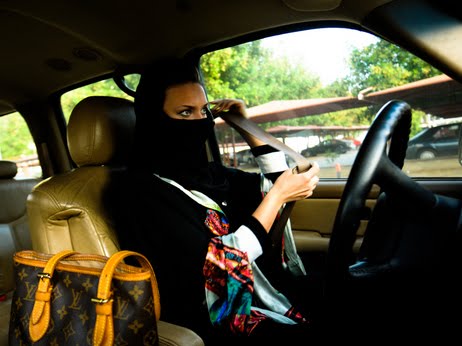 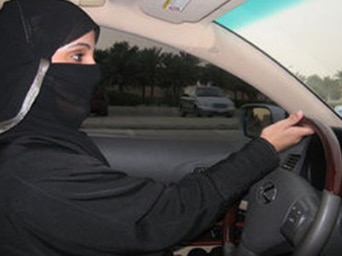 In a primitive society where women find themselves in such a farcical situation where they are not even allowed to drive, a simple word like ‘driving’ which is per se devoid of any archetypal undertones has come to carry a meaning far beyond ordinary.

Saudi Arabia has treated women as second-class citizens for decades, denying them many rights including the right to drive. However, the act of driving recently gained symbolic significance when a group of Saudi activists launched an online campaign in June and urged women to start driving on Saudi Arabian roads. Known as the “Women2Drive” campaign, they used Facebook and Twitter to engage in driving as part of their protest against women discrimination in the country.

A Saudi woman named Najla Hariri drove her car on Prince Muhammad bin Abdul Aziz Street in August in a bid to support the “Women2Drive” and “My Right, My Dignity” campaigns, thus flouting the ban on women driving. For this, she was briefly detained on the evening of August 24 but was released the other day. However, reports say she is to stand trial at the Bureau of Investigation and Prosecution in Jeddah. Also, in May, a 32-year-old Saudi activist Manal al- Sharif, a mother of a 5-month-old boy, was detained for driving but was soon released. She was reportedly forced to sign a form pledging not to drive again.

On May 22, al-Sharif was arrested again and the Saudi court said she would have to spend a five-year imprisonment term. The move was condemned by Amnesty International on May 24 which described al-Sharif as a ‘prisoner of conscience’ and demanded the immediate release of the detainee. Pressured by activists at home and abroad, the Saudi court had no choice but to comply with the conditional release of the prisoner on 30 May. Among her charges were ‘inciting women to drive’ and ‘rallying public opinion’. It is reported that al-Sharif has written a letter to the octogenarian Saudi king, while, at the same time, 4500 Saudis signed an online petition demanding the release of al-Sharif and blasting the Saudi court for incarcerating al-Sharif for nothing.

Only recently, a Saudi court sentenced a woman with 10 lashes for violating the ban on women driving in the Arab country. Shaima Ghassaniya was found guilty Tuesday of driving without any permission obtained from the legal authorities. The decree which is the first of its kind drew a slew of criticism from many activists around the world, including Amnesty International, which said it demonstrated the “scale of discrimination against women in the kingdom.” The decree, however, was revoked by the Saudi King.

Condemning the ban on women driving, Philip Luther, Amnesty International’s deputy director for the Middle East and North Africa, has said that, “Not allowing women behind the wheel in Saudi Arabia is an immense barrier to their freedom of movement, and severely limits their ability to carry out everyday activities as they see fit, such as going to work or the supermarket, or picking up their children from school.”

The ban on women driving is not only symbolic for the Saudi women but for the Saudi government too. Saudi women break the ban by driving their cars on the Saudi streets as symbolic protest while the Saudi king, who is fearful of a similar uprising in the hungry-for-justice Arab country, uses the ban as a proactive measure in order to prevent future popular protests.

In July, a contentious video was circulated on the internet, showing Saudi tanks rolling into Bahraini streets and taking on the pro-democracy protesters. It later transpired that the Saudi regime had inked an agreement with Germany over a deal estimated to be worth around £800 million to buy 200 high-tech LEOPARD 2 A7+ tanks in order to use them in crushing uprisings in neighboring Bahrain and in the Saudi kingdom.

Jan Grebe, a researcher at the Bonn International Center for Conversion, says that this “would be a perfect tank to drive into Bahrain and crack down on any uprising. It’s also a good tank to fight any demonstrations in Riyadh.”

Evidently alarmed by the popular uprisings in the region, King Abdullah of Saudi Arabia, now 87 years of age, issued a decree on Sunday according to which Saudi women who have been deprived of the right to vote will be granted the right to participate in and run for the municipal elections for the first time ever in the country. 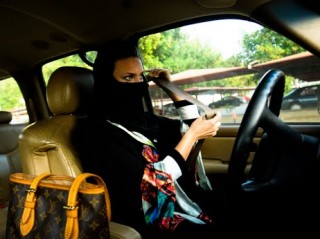 Swiftly welcomed by some Western countries as democratic generosity on the part of the Saudi king and as a sign that the Saudi regime is taking steps in the path of democracy, the decree will be starting from the next term, the following municipal elections to be held in 2015. As a matter of fact, the decree is only to be seen as a temporary poultice for the wound gradually gaping in the Arab country.

In a similar strain, some superficial observers have taken an optimistic look at the issue, and regarded it as a promotion in women’s status, ‘a step closer to political autonomy’, in Saudi Arabia.

The situation of the Saudi women is wretchedly reminiscent of that of pre-Islamic women when the Arabs dwelled in total ignorance and used to bury alive their baby daughters. One of the verses of the Holy Quran was descended in condemnation of this horrific act (And when the girl-child that was buried alive is asked: For what sin she was slain? [Holy Quran 81: 8-9]). Banning women from driving will eventually lead to a massive uprising across the country as it is gradually being used by women as a means to vociferate their long-smothered voice in a male-dominated society.

It is very unfortunate to note that the modern Saudi regime does not seem to have made much progress in granting basic rights to its citizens particularly to women who are considered no more than ‘chattels’ as in the age of ignorance.