Home WarZone Dick Cheney in Canada: Breakdown of the Rule of Law 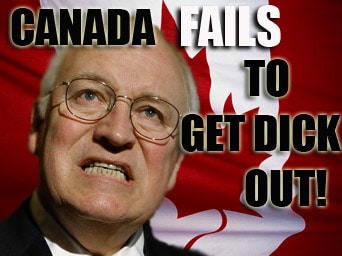 Canada has some very progressive Human Rights laws which if enforced would prevent Canada from becoming a safe haven for war criminals.

The Israeli-inspired destabilization of the Middle East provided an opportunity for the redundant Cold Warrior to make some retirement money through his shares in Halliburton. Cheney is thus a quintessential war profiteer.

Canada has some very progressive Human Rights laws which if enforced would prevent Canada from becoming a safe haven for war criminals.

Protesters were not primarily protesting Cheney but rather were seeking to draw attention to the failure of Canadian law enforcement officials to uphold the rule of law in Canada.

Calgary of course is the city that George W. Bush visited for his first speaking engagement after leaving office (i.e. without diplomatic immunity). On the day of Bush’s speech in Calgary, March 17, 2009, Splitting the Sky selflessly attempted a citizen’s arrest on Bush. 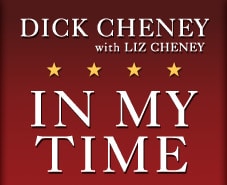 Dick Cheney was peddling his new memoir entitled In My Time in which he perpetuates the cover-up of 9/11 and attempts to justify his criminal acts. Cheney’s participation in the 9/11 incident and in the 9/11 wars seems to have been motivated by his involvement with Halliburton Corporation which lucratively rebuilds oil infrastructure when oil rich countries like Iraq are decimated.

The Israeli-inspired destabilization of the Middle East provided an opportunity for the redundant Cold Warrior to make some retirement money through his shares in Halliburton. Cheney is thus a quintessential war profiteer. Thanks to the politicization of Canada’s law enforcement system Cheney was afforded impunity and was able to come to Canada to reap yet more profits from the sale of his new book.

These three videos depict the protests held in Calgary and Vancouver during Dick Cheney’s recent visit to Canada.

Footage of the Vancouver protests.

Joshua Blakeney and others denounce the Calgary police for failing to arrest Cheney.