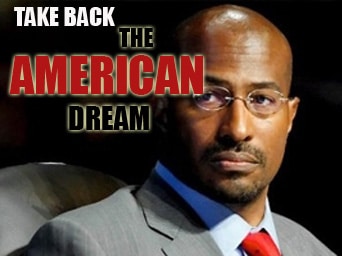 “Take Back The American Dream”

In his speech to the “Take Back The American Dream” conference Monday, former Obama advisor Van Jones held up the “Occupy Wall Street” movement as an example of what progressives could do to force change.

“Something just came across the news wire,” Jones announced. “It’s an extraordinary thing. We know we have the young folks and the struggling folks who are down there on Wall Street… They went down there to the scene of the crime against our future. They went down there and they have been camping in the rain. They’ve been beaten. They’ve been pepper-sprayed. They’ve been falsely arrested. And when they police were dragging them away, they said, We’re out here, the 99 percent, we’re fighting the one percent. You, officer, are part of the 99 percent. We’re fighting for your pensions too. We’re fighting for your pensions too.’ This is a new movement.”

“And because of their courage and the character they showed, today it was announced that in their dress blues, Marines are going to protect them and stand with them. In their dress blues! The Marines! The veterans!”

“They’re going to stand out there with those young people in their dress uniforms. And one of them had a sign and the sign said, ‘This is the second time I fought for my country… It’s the first time I’ve known who my enemy was.'”

ABOUT VAN JONES: In March 2009 Jones was appointed by President Barack Obama to the newly created position of Special Advisor for Green Jobs, Enterprise and Innovation at the White House Council on Environmental Quality, where he worked with various “agencies and departments to advance the administration’s climate and energy initiatives, with a special focus on improving vulnerable communities.”[7][8] In July 2009 he became “embroiled in a controversy”[9] over his past political activities, including a public comment disparaging congressional Republicans, his name appearing on a petition for 911Truth.org, and allegations of association with a Marxist group during the 1990s.[10][11] For these issues, Van Jones was heavily criticized by conservatives.[12] Jones resigned from the position in early September 2009.[9] “On the eve of historic fights for health care and clean energy, opponents of reform have mounted a vicious smear campaign against me,” Jones said in his resignation statement. “They are using lies and distortions to distract and divide.”

At the beginning of October 2011, prior to a Rebuild the Dream conference in Washington, DC, Jones compared the Occupy Wall Street movement to an “American Autumn” comparable to the Arab Spring uprisings, saying, “You can see it right now with these young people on Wall Street. Hold onto your hats, we’re going to have an October offensive to take back the American dream and to rescue America’s middle class. [More at wiki]

The Marines are Coming to PROTECT the Protesters