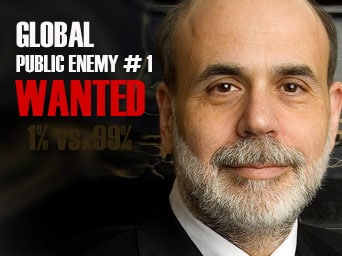 Over the last 100 years, the shadow global government has been building up and operating in secret behind closed doors at places like Bilderberg and Bohemian Grove.

But now, it’s out in the open and their contempt is as blatant as the pepper spray their soldiers use against the non-violent Occupy Wall Street protestors.

Yesterday, in a blatant attempt to keep the US middle out of the Occupy Wall Street equation, the Fed in Fear placed the US Mortgage rates below 4% for the first time in history.  Make no mistake, this is no coincidence.  Ben Shalom Bernanke and his assigns are not stoopid. They understand how to control the US sheeple.

Now, while middle America rushes to their refinance guy at the local mortgage enslavement firm, the Occupy Wall Streeters are left with only the lowest classes to fight the power; a good strategy to nuetralize the protest.

It’s just another step for the global government in waiting to mission creep themselves forward while the middle of America claps and cheers all the way to fascism and complete control.

For all of you reading this for the first time, be advised that this is NOT something new.  The global government has been at work for decades planning and plotting.  Their aim is simple to destroy the US economy and lower the standard of living.  Then, like they did with the European Union, they aim to unify the North American Union with Canada, Mexico, and the USA.  Later the Asian Union as the Tri-Lateral Commission gets set to use those three pilars to govern the globe under one global government.  It’s right there in your face…..take a look! 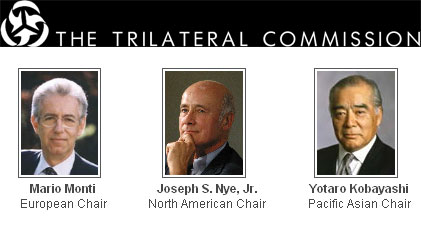 Now some of you may say, wow…good idea!  But wait, you gotta know they plan on taking down the human population from an expected 9 billion in 2050 down to less than 1 billion people.  They want a return back to natural equilibrium where technology and nature will allow their species to live super long lives while our species, the 2nd tier, goes extinct.

Don’t believe it?  Print this and give it to your children for their children in the year 2075 and see if what I am saying is out of the realm of reality.

As it stands, we see injustice and starvation everywhere on the globe with no one in “elected”  government is taking a stand.  They’ve been hog tied and shut down by the global power.  Millions will die off soon and billions to come later on in the 21st century.

Strife is everywhere….from Greece to Syria to main street USA.

Yesterday, empire globalist Dick Cheney entered Canada to claps and cheers. Yes, the same guy who tortures, circumvents international law, and robs the US Taxpayer blind while guys like George Callaway are refused entry.   What this means is that Canada no longer respects international law.  This means its peoples who once stood for human rights have been hijacked by the globalists and stand impotent like the rest of the US peoples.

And so Canadians are now one of us; the deposed, abused, beaten, and ignored.

It started in Tunisia, then over to Egypt, and now in Syria and spreading to the US.  People are fed up with the global government posing as national governments everywhere.  The ruse is in plain view now.

It’s now the global 99% versus them, the ruling 1% and they aim to win at all costs.  The only question is;  Will the 99%, that so-called 2nd class of humans, rise up and take humanity back from these strange abusive animals?