Home Government The Domino Effect: Is London Next? 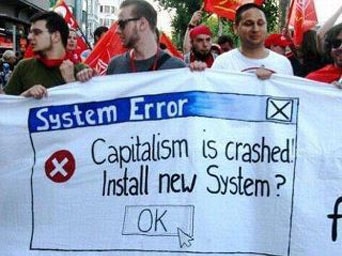 Hardly has London regained peace and quiet from the recent protests that it should brace itself for further unrest as the Occupy Wall Street Movement seems to have inspired the country’s youth.

Is the Wall Street Movement creeping into Britain? Or is what is unfolding in England and other parts of Europe the continuation of the same uprising that started in North Africa and the Middle East? It is certain that a movement the size and proportion of the Occupy Wall Street movement which gradually engulfed the whole USA will be too much of a shock for the British government, which is still convalescing from the horror of its recent riots.

Reports say that ‘Occupy London’, a group inspired by the American uprising, will pitch tents in London’s financial district starting Oct. 15 in a symbolic move to show that most of the working people can’t really afford to live comfortably. Chiefly composed of activists, the group is planning to protest the social inequalities, iniquities and injustice rife in the country. Kai Wargalla, the creator of the Occupy London group on Facebook, has stated that it is now time to start the revolution in London and that people should step up and voice their anger at the top of their lungs.

“This movement aims to unite the United Kingdom’s far-flung activist communities in addressing the inequality of the financial system,” he added.

Ronan McNern, a member of U.K. rights group ‘Queer Resistance’ says, “We’re the beginning of something. People are not stakeholders in democracy, in the workings of the nation anymore. This [movement] gives a lot of hope for the future.”

Around 3,000 people have already agreed to attend the event, with the number of fans on the increase. Apart from their call for peaceful demonstrations, they have also asked for a global day of action on the same day.

“Hundreds attended the General Assembly and we are growing stronger every day!” Read a statement posted on the “Occupy The London Stock Exchange” Facebook page.

The protesters are also planning occupations in Worcester, Nottingham, Edinburgh, Liverpool, and Bristol.

“We remained unified and respected each other’s opinions. We are part of a global popular movement and not supportive to one ideology or faction, we are the 99%. Only the General assemblies and occupations themselves truly speak for the movement. Please attend the General Assemblies, become involved in the Occupations have your say and combine your voice with millions – this is a global issue and must be fought in unity!”

Members of Occupy London are deeply influenced by the “We are the Ninety-Nine Percent” group in the USA who basically sought to deflate the image the incorporates depicted of America as a country replete with well-to-do people with no particular concerns for the future, a country seen from the outside as a utopia to be desired with heart and soul, a land of opportunities for those who felt they were denied the same in their own countries. The movement actually shattered to smithereens the beautified image of the USA in the eyes of the world and instead drew a sordid picture of poverty and misery hitherto unknown to the rest of the world.

Soon, the popular urge for social reforms and poverty elimination will be mixed with other demands which have been, for all intents and purposes, ignored.

It is evident that the Wall Street protests which were initially blacked out by the mainstream media and the top US echelons but were later considered to be an exacerbating social woe by the same powers have had its impact on upcoming events in Europe. In its futile attempt to curb the paralyzing power of the will of the people, Britain has only lent more strength and vigor to it, paving the way for more social unrest.

The Arab Spring which wafted over the USA like a gentle breeze has now transmogrified into a hurricane, reaching Britain, and the domino effect will inevitably prevail in most parts of Europe which have already witnessed scenes of unrest on account of the governments’ inefficiency and the deteriorating economic situation across the continent.

Awakening is in the offing in Britain. And who knows when it will reach the rest of Europe?