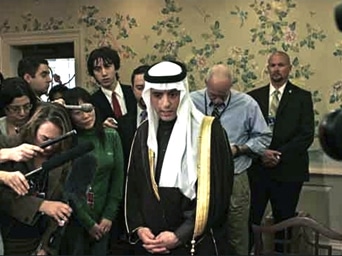 Who benefits?  Who had the connections, the ability and the opportunity?  Who had $100,000 bucks they could afford to throw away? There is no need to be a conspiracy theorist,  it is all so transparent!

It has the ring of a far-fetched Hollywood thriller and even the senior law enforcement official involved in the investigation admitted to journalists that the alleged plot to kill the Saudi ambassador to the US did not fit with what was known about the methods and practices of the supposed perpetrators, the Quds force of the Revolutionary Guards.

But $100,000 was clearly transferred by someone as a downpayment on the assassination. Washington is taking the case seriously enough to make unprecedented allegations against Tehran and threaten further isolation.

It appears very unlikely that Iran‘s supreme leader, Ayatollah Ali Khamenei, would approve such a brazen plot with such unpredictable consequences, in effect going to war with Iran’s three greatest enemies – Saudi Arabia, the US and Israel – at the same time.

The watchwords of Khamenei’s 23-year tenure have been caution and regime stability. He has attempted, not always successfully, to calibrate the nuclear programme to avoid uniting the UN security council against Iran, while pushing on steadily.

Iran, under his guidance, has worked very hard to mitigate the international impact of sanctions and is sensitive to its standing in the Islamic world. Things are generally going well for Tehran in the triangular relationship with the US and Saudi, as Washington and Riyadh had fallen out badly over the Arab spring and Palestinian recognition. Why would Khamenei and his regime risk all this on such a bizarre plot?

Mahmoud Ahmadinejad is also a problematic suspect. The president has little influence on the Quds force and is currently on what passes in Tehran for a charm offensive, releasing two US hikers after two years in custody and proposing a new uranium deal last month. Ahmadinejad is in a tense standoff with Khamenei and in the past has backed a limited accommodation with the west. Would he risk his own precarious position to back a plot and would he have the power to orchestrate such a venture without the supreme leader’s knowledge and approval?

The Quds force has previously gone to great lengths to ensure its fingerprints are not found on attacks abroad. It almost always operates through trusted proxies such as Hezbollah and Iraqi Shia militias, with which the Iranians share a common faith, and which the Revolutionary Guards have trained in most cases. Despite years of investigations, there is suspicion but no proof of Iranian involvement in the 1983 bombing of the US embassy in Beirut and the 1996 attack on the Khobar Towers in Saudi Arabia.

In this latest alleged plot, the Quds force was purported to be working with a Mexican drugs cartel, the Zetas, with an Iranian-American used-car salesman as middleman (the plot was said to be codenamed Chevrolet). The link was made because the car salesman, Mansour Arbabsiar, was allegedly a cousin of a “big general” in the Quds force and a friend of the aunt of a Texas “associate” of the Zetas. Arbabsiar revealed the Iranian nature of the plot to this man, who turned out to be a US government informant. Why would the Quds force now throw its professionalism and caution to the wind?

The key evidence that the alleged plot was serious was the $100,000 wire transfer. It came from a foreign bank account, but that cannot be an Iranian account because such transfers are impossible under US law. The money must have come from a third country, but which? And how can the US authorities be so sure the foreign accounts were under the control of the Quds force?

Arbabsiar boasted that his cousin, who is said to have instigated the plot, “worked for [the] government [of Iran] but he’s working outside. He’s working like … like [a named non-Iranian intelligence agency]”. Arbabsiar’s absent co-defendant, Golam Shakuri, was allegedly a Quds colonel working for the cousin. Who is this cousin and how sure are the US authorities that he is a senior member of the Quds force?

Arbabsiar was told by his cousin and another high-ranking member of the Quds force that the head of the force, presumably Kassim Suleimani, approved of the plot and would eventually meet Arbabsiar. But is there any proof that he was involved?

Could the alleged conspiracy be the work of an extremist cell within the Quds force? In that case, the unit is far more fragmented that previously thought and we should shortly see top people in the organisation disappearing from view.

There is a precedent for such a cell: in 1999 the deputy minister of intelligence, Saeed Emami, was arrested and accused of carrying out a series of murders of intellectuals, known as the chain murders, without official authority. He was also reported to have tried smuggling missiles to Brussels to attack Nato. Emami was reported to have killed himself in prison.

Could the alleged plot be provocation by an outside agency seeking to start a conflict between Iran and its enemies? In that case, Arbabsiar is consciously misleading his interrogators or is being used by his cousin and his associates, who are working for this third party. If that was the case, how did Arbabsiar correctly identify a senior Quds officer whose identity is not widely known?