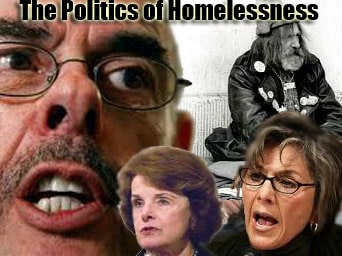 When will Congressman Henry Waxman and Senator Dianne ever get serious about providing shelter for the 20,000 Veterans living homeless and hungry on the dangerous streets of Los Angeles, our nation’s capital for homeless Veterans?

The largest VA property in the nation is in Cong. Waxman’s 30th District, but instead of the VA providing shelter for our homeless Veterans as specifically dictated in the Deed and Charitable Trust of 1888, there’s a public dog park, a playground / athletic field for a wealthy private school, a private soccer-field for a wealthy youth soccer organization, parking lots for Enterprise car-rental, Tumbleweed buses, Getty Museum, PGA parking, etc., a public golf course, a public botanical garden, public theaters, etc.

Meanwhile Veterans sleep on the sidewalks next to the VA’s multi-million dollar wrought iron fence that replaced a chain-link fence to help “beautify” the entryway into Brentwood. (see attached)

In 2007, Veterans Park Conservancy, which is not a Veterans organization, but an affluent and influential non-profit homeowner corporation in Brentwood, obtained an unprecedented arrangement with the VA Secretary and the Congressional delegation to build a public park, “for the enjoyment of the entire community,” on a billion-dollar parcel of Veterans property, rent-free, instead of the VA building shelter for homeless Veterans.

Both Cong. Waxman and Sen. Feinstein endorsed this public community park on Veterans property while neglecting their fiduciary duty to provide proper shelter and care for America’s homeless Veterans.

There are nine buildings on Veterans property that have been designated by the VA as “vacant,” and the Congressman and Senator are now “throwing a bone” to the hungry and homeless Veterans by promising to rehab one of these vacant buildings.

These two powerful legislators authored and recently passed a Bill that calls for spending up to $35.5 million to rehab building 209 that has been vacant for more than 20 years.

The money will be spent for “seismic improvements” and what will amount to nothing more than a fresh coat of paint and new carpeting for 80 rooms ($450,000 per room) on a building that is 80 years old, and it will not remove one homeless Veteran from back-alley squalor as this will be used for transitional housing for Veterans who have already gone through rehab treatment at the VA, and the building will not be readily available for another couple years.

It’s important to know that after decades of ignoring the homeless Veteran problem while appeasing their wealthy constituents to build a public park and whatnot on Veterans property, the Congressman and Senator co-authored the seismic rehab bill just three weeks after the ACLU filed their lawsuit against the VA for misusing Veterans property and abusing homeless Veterans.

“Money for veteran housing gets OK”

In the article, David Sapp, an attorney with the ACLU rightly noted: “They’ve been talking about this {building 209} since 2003, about rehabbing this one building. They’ve put out numerous press releases to maybe, some day, possibly do something. There are still vets living and dying on the streets of Los Angeles, and press releases don’t solve that problem.” Right on Mr.Sapp!

And in spite of the ACLU lawsuit, there are now 10 powerful tax-paid attorneys from the Department of Justice and US Attorneys Office trying to get the lawsuit dismissed and further defy the VA’s responsibility to operate this land as a National Veterans Home and to provide shelter and care for disabled and disadvantaged Veterans. Think about this — the US government is using your tax dollars to keep homeless Veterans homeless while the fat-cat neighbors get fatter with a public park on Veterans property.

And how is it that two of the most senior and powerful members of Congress and the Senate can only come up with a paltry $35.5 million to provide housing and care for 80 rooms when there are 20,000 homeless and hungry Veterans fending for their lives on the dangerous streets of Los Angeles?

Well, the Old Veterans Guard is throwing back their insulting political bone and telling the Congressman and Senator to put some meat on it and end the homeless Veteran problem once and for all with a $2.5 billion new and modern “Grand Home and Gardens” for disabled, disadvantaged and homeless Veterans.

There are 20,000 homeless Veterans, of which 7,000 are declared “chronic homeless.” We cannot and will not wait any longer. This is an “emergency!” The lives of Veterans and their property are in extreme danger.

We’re calling on Congressman Waxman and Senator Feinstein to immediately cancel the privileged public park agreement that they have endorsed and support.

There’s already a Veterans Japanese Meditation Park on the VA grounds for “outside therapy,” except the VA keeps it chained and padlocked and off-limits to Veterans. However, it is available 24/7 to the Hollywood filming industry for their use.

It’s time to get serious and open the Meditation Park and cancel the public community park agreement, posthaste.

We’re also calling for the Congressman and Senator to direct the VA to allocate $2.5 million of the $35.5 million to turn the 16 acre public park area into an emergency shelter for homeless Veterans by coordinating a Veterans “Stand Down” encampment led by Vietnam Veterans of America and other Veterans Service Organizations and community volunteers. (see attached emergency plan)

This a call to action and we’re asking everyone to “stand up” for a Veterans “Stand Down” encampment so that we can finally begin to “Bring Our Homeless Veterans HOME.”

You are requested to contact Congressman Waxman and Senator Feinstein and demand that they immediately drop their endorsement of this public park, and further demand that they direct the VA to immediately rescind this privileged public park arrangement so that we can establish a Veterans “Stand Down” encampment on this sacred land where Veterans from the Civil War once walked.

Stop the politics of keeping our homeless Veterans homeless while making the fat-cats fatter.