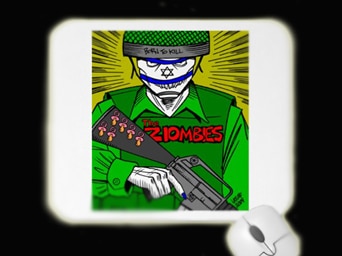 Here’s a horror movie script: A pack of flesh-eating zombies establishes total control over the world.

But because the zombies dominate the media, and have infiltrated other power centers, ordinary people don’t realize it.

When victims are found dead, half-devoured, huge chunks of flesh ripped out of their cadavers, human-like teeth marks up and down what’s left of their skin, the zombie coroner rules it a heart attack. And when witnesses contest the coroner’s ruling, insisting they saw a bunch of zombies ripping flesh off the victim with their teeth and sucking down the bloody strands like spaghetti, the witnesses are either bought off, or suffer similar “heart attacks” themselves.

If only this were just a horror movie.

The hideous truth is that the ZoMBies – Zionists, Militarists, and Banksters – have already taken over much of the world. Their secret government, which overrules democracy and stages and covers up murderous atrocities on a regular basis, is rarely if ever acknowledged by such mainstream institutions as government, academia, and big media.

In the horror movies, zombies are parasites. They don’t do any real, productive work. They just feast off human flesh.

The Zionists have become a humungous trillion-dollar leech sucking the blood out of the American body politic. They are trying to sustain a genocidal settler-colony fifty years after settler colonialism died. The whole world – especially their nearest neighbors – loathes them and longs to put them out of their misery. Their situation is hopeless. They only survive due to the Amazon-river-sized flood of hot, fresh blood that they suck continuously out of the ever-more-anemic USA. The Zionist parasite is killing the American host.

The militarists are also parasites. Sure, they have a job to do: Defend the borders. But the USA could defend its borders for a minuscule fraction of its current military budget. Because the militarists have the guns, they can point them at the civilian sector and say: Give us a hundred times more than we need to defend the borders! And the civilian sector – the productive sector – has no choice but to comply. If someone dissents, like JFK or MLK or Paul Wellstone, they are made an example of. With all that extra money, the militarist parasites have plenty of means to run around the world stirring up unnecessary trouble, inventing imaginary threats, and brainwashing the public into believing the puppet show is real. And because military spending kills economies (www.RealEconomy.com) the military parasite is killing the civilian host. 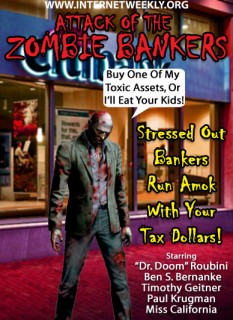 But if you thought the Zionists and militarists were parasites, get a load of the banksters! Like militarists, bankers supposedly have a job to do: Provide a safe place for deposits, and make loans. But this job was a form of organized crime throughout most of history, because charging interest on loans – usury – has always been considered one of the worst of crimes. So the banking sector was always the top tier of organized crime.

The banksters became even more gargantuan parasites when they began committing the crime euphemistically described as “fractional reserve lending” – a fancy term for an exceptionally nasty form of fraud. (Watch The Money Masters for details.) By lending out far more paper money than they had gold in their vaults backing it, these counterfeiters built a financial dynasty. Soon they had enough money to bribe the politicians to let them, the bankster criminals, create the entire money supply out of nothing by lending it into existence at interest. Since then, the banksters have ruled. Democracy is a fraud, a puppet show designed to distract the masses.

It is the banksters who sit at the apex of the Zionist-Militarist-Bankster power pyramid. They are the real ZoMBie kings. As the Rothschilds say, “give me control of a nation’s money, and I care not who makes its laws.” 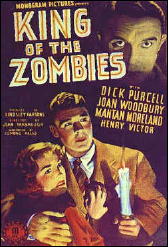 Who gains when the US goes broke by hemorrhaging a trillion dollars to Israel and trillions more to the military? The banksters. Where do you think the US has to borrow all that money from? (It could print the money itself, as the Constitution mandates – but because we’re living in a horror movie where ZoMBies rule, when a president tries that, as Jack Kennedy did, his skull will soon explode into a splatter of blood, brains and bone splinters.)

The US is going broke, getting in deeper and deeper debt to the banksters. Our flesh is being devoured. Our economy is a walking corpse.

As the stench of death spreads across the land, ordinary people are gathering on Wall Street and elsewhere to defend themselves against the ZoMBies.

Will this one have a happy ending?

Got me. Ask George Romero.