Rachel Abrams’ violent fantasies are protected under the first amendment, but the organization’s leadership might want to look in the mirror before smearing the Occupy Wall Street protests as intolerant.

The wife of Elliott Abrams has published a vitriolic rant on her blog “Bad Rachel” in which she calls Palestinian children “devil’s spawn.”

Demonstrating surprising ignorance of both Islam and the situation in Israel-Palestine, Rachel Abrams writes about the release of Israeli tank gunner Gilad Shalit (in return for hundreds of Palestinian prisoners, including women and children) :

He’s free and he’s home in the bosom of his family and his country. Celebrate, Israel, with all the joyous gratitude that fills your hearts, as we all do along with you.

Then round up his captors, the slaughtering, death-worshiping, innocent-butchering, child-sacrificing savages who dip their hands in blood and use women—those who aren’t strapping bombs to their own devils’ spawn and sending them out to meet their seventy-two virgins by taking the lives of the school-bus-riding, heart-drawing, Transformer-doodling, homework-losing children of Others—and their offspring—those who haven’t already been pimped out by their mothers to the murder god—as shields, hiding behind their burkas and cradles like the unmanned animals they are, and throw them not into your prisons, where they can bide until they’re traded by the thousands for another child of Israel, but into the sea, to float there, food for sharks, stargazers, and whatever other oceanic carnivores God has put there for the purpose.

According to his bio on the CFR website: Elliott Abrams is: “Former senior director for democracy and human rights, senior director for the Near East, and deputy national security adviser handling Middle East affairs in the George W. Bush administration. Former assistant secretary of state for UN affairs, human rights, and Latin America in the Reagan administration.”

Abrams was convicted in 1991 for unlawfully withholding information from Congress during the Iran-Contra Affair investigation.

The Emergency Committee for Israel (ECI) — a right-wing “pro-Israel” pressure group — attempted to paint the Occupy Wall Street protests as anti-Semitic. But while plenty of evidence runs counter to the ECI’s far-reaching assertions that politicians are “turning a blind eye to anti-semitic, anti-Israel attacks,” the ECI is much slower to condemn its own ties to ethnic and religious intolerance. 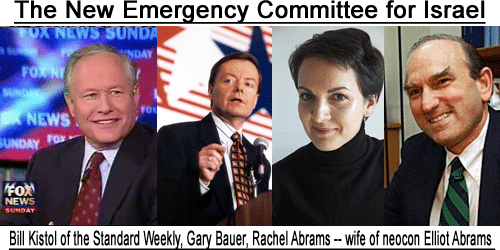 Last year, she focused on Christopher Hitchens’ bisexuality in a post titled “Giving Homosexuality a Bad name.” She wrote:

Wherever one stands on the homosexuality question—I’m agnostic, or would be if the “gay community” would quit trying to shove legislation down my throat—there can be no denying bisexuality’s double betrayal—you never know, whether you’re the man of the hour or the woman, when the ground on which you’re standing is going to turn to ashes—nor any denying the self-admiring “nourishment” its promiscuous conquests afford.

And following the death of Sen. “Teddy” Kennedy (D-MA), she offered the following innuendo-filled limerick:

An amorous sot name of Teddy
Lost control when things got a bit heady.

He went over the side,
Left his ride in the tide,
And his squeeze giving head to an eddy.

But Abrams saves her harshest, most dehumanizing, words for Palestinians. Abrams writes that after Israel finishes celebrating the release of IDF soldier Gilad Shalit, they should:

…round up his captors, the slaughtering, death-worshiping, innocent-butchering, child-sacrificing savages who dip their hands in blood and use women—those who aren’t strapping bombs to their own devils’ spawn and sending them out to meet their seventy-two virgins by taking the lives of the school-bus-riding, heart-drawing, Transformer-doodling, homework-losing children of Others—and their offspring—those who haven’t already been pimped out by their mothers to the murder god—as shields, hiding behind their burkas and cradles like the unmanned animals they are, and throw them not into your prisons, where they can bide until they’re traded by the thousands for another child of Israel, but into the sea, to float there, food for sharks, stargazers, and whatever other oceanic carnivores God has put there for the purpose.

Abrams’ violent fantasies are protected under the first amendment, but the organization’s leadership might want to look in the mirror before smearing the Occupy Wall Street protests as intolerant. (HT: Media Matters)

Source: The Council for The National Interest (CNI)

AP Online April 25, 2011 | ELLEN GIBSON What happens when you cross the world’s largest social network with one of the hottest business models in e-commerce? Facebook wants to find out.

Facebook is launching a deals program Tuesday in five U.S. cities, following on the popularity of Groupon and other services that offer deep discounts ? for example: $50 worth of food at a local eatery for $25.

By allowing small businesses to leverage the Internet while helping consumers score great deals, these group-couponing services have become some of the fastest-growing businesses in the world.

Facebook now wants a part of that. It hopes to exploit its existing networks of friends and family when it begins testing offers in San Diego, San Francisco, Atlanta, Dallas and Austin, Texas.

Many deals sites have a social component. For instance, if you get three friends to buy a LivingSocial voucher, yours is free. Groupon’s offers become valid only after a certain number of people purchase them.

“We’re building a product that is social from the ground up,” says Emily White, director of local for Facebook. “All of these deals are things you want to do with friends, so no teeth whitening, but yes to river rafting.” Starting Tuesday, when Facebook users in the five test markets log in to the site, they will see a deals insignia at the bottom of the page. (The dashboard pops up automatically if the “current city” listed in your profile is one of the five included in the pilot.) Clicking on it brings up a list of currently available offers. A user can buy one, click the “like” button to recommend it to others or share the offer with friends through Facebook’s private messaging system. When users purchase or “like” a deal, it shows up in their friends’ news feed.

That means “the discovery of the product can happen in lots of different places,” White says.

“Dining out is an inherently social activity, so extending our reach to deals on Facebook is a natural experiment for us,” says Scott Jampol, general manager of OpenTable’s deals program, Spotlight.

Not all offers involve discounts. Some are experiences people may not otherwise have access to, such as a backstage pass to Austin City Limits concerts, a tour of the Dallas Cowboys’ new stadium, or a children’s sleepover at the California Academy of Sciences in San Francisco with live-snake demos.

In some cases, you’ll get a “friend bonus” ? an additional discount ? if at least one other person in your social network buys a deal.

This is not the first time a social network has made a foray into disseminating deals. Twitter launched its own daily deal program called Earlybird Offers last year but canceled it after just two months. Last November Facebook launched a product called Check-in Deals that allowed users to “check in” via their mobile phones when they visit certain businesses and in turn receive discounts and other special offers. Location-based social network Foursquare has a similar program.

Offers through Facebook can last anywhere from a day to a week. The social network won’t disclose how much commission it takes. (With Groupon and others, the deal site typically takes up to half the revenue.) There are hundreds of Groupon copycats willing to accept lower commissions, but many small businesses prefer to partner with larger companies such as Groupon and LivingSocial because they reach more potential customers.

Facebook will bring deals to even more people. While Groupon has 70 million members and LivingSocial has 28 million, Facebook has 500 million users worldwide.

Add to that the fact that many small businesses already have a Facebook presence, and the social network becomes a good fit for daily deals, says Greg Sterling, senior analyst for Opus Research.

Groupon declined to comment on Facebook’s competitive threat or whether the coupon site will continue to advertise on Facebook.

As a share of overall Web surfing, visits to group-buying sites grew ten-fold over the past year, according to research firm Experian. LivingSocial had 7 million unique visitors in March, up 27 percent from February, making it one of the 10 fastest-growing websites in the U.S., according to ComScore.

“Groupon and LivingSocial have shown how much demand there is out there,” Sterling says. “Facebook, if they do this right, can have a big hit on their hands.” ELLEN GIBSON