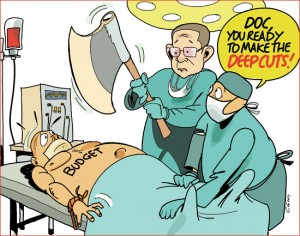 When Congress returned from its summer recess and the joint select committee charged with reducing the deficit began its work in earnest, the news media, in an effort to take the pressure off the President and the wasteful Congress of 2008-2009, focused all the attention on the Super Committee. In the constant battle to bolster the administration we continue to see a biased slant regarding anything to do with President Obama in most news publications. 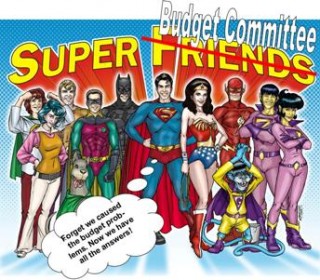 This includes now blaming all of Washington’s budget ills on a “do nothing Congress” and a “bunch of Republicans intent on blocking all budget ideas”, when in fact our real budgetary problems which have been building for years, were compounded by the current administration. What we really have had since 2008 is a “do everything” President and a complicit Congress. While many Americans are beginning to catch on, most still don’t get it. With COLA (Cost of Living Increase Adjustment) now becoming part of the Beltway conversation, we must become engaged.

According to a 2011 Pew Research Poll, we still have the majority of Americans that are either, dense, stupid, ignorant, or simply don’t care as long as they keep getting free goodies from Washington. How else can one explain that only 43% of Americans know that John Boehner (Republican) is the Speaker of the House, and that 40% of the total US energy comes from coal (many were thinking “green energy”). Additionally, only 38% of Americans realize that Republicans only control the House of Representative – one half of Congress which makes up only 1/3 of the ability to enact laws, and didn’t realize that Democrats control 2/3 of the government with the Senate and Presidency. Yet more than one half know the founder of Facebook (Zuckerberg) and 91% of Americans know Lady Gaga or lyrics to her music.

This brings us around to what is needed to be discussed today… “The Cost of Living Adjustment (COLA)”; what it is, how and when it will be applied, to whom, is it fair, how is calculated, and how it will affect the Super Committee’s task of cutting the budget by $1.3 trillion dollars. It’s a big task and will take more than one brief article or sound bite.

What is COLA? COLA is not to be confused with the Consumer Price Index (CPI), but is used to adjust the CPI during inflationary times. You’ve heard the old expression, “the dollar ain’t what it used to be”. That refers to the fact that the purchasing power of the dollar has been diminished by inflationary factors such as government spending, national debt, wage and salary increases, improved productivity in the workforce, and other factors beyond the control of the citizenry.

The cost of living is a certain standard used by the Bureau of Labor Statistics (BLS) as a baseline from which to weigh the purchasing power of the dollar.

The CPI is a cost-of-living index and reflects changes in the prices of goods and services, such as food and clothing that are directly purchased in the marketplace. A complete cost-of-living index would go beyond this to also take into account changes governmental or environmental factors that affect consumers’ well-being and spending habits. The treatment of public goods, such as safety and education, health, water quality, and crime are needed to provide a complete cost-of-living framework. COLA is used as a factor to balance the changes in the CPI.

Is the CPI accurate? Only you can be the judge of that question. Ask yourself, as in the case of the current assessment of CPI needing an upward adjustment of 3.6% (COLA). Does that 3.6% really cover the increased cost in that 10-pound bag of potatoes which was $3.97 two years ago and now costs $4.97? Does it reflect the latest increase in healthcare insurance, the cost of gasoline, the increasing price of eggs, and the increase cost for school services provided to your children? In short can you still make it on your pay check?

The CPI does not include investment items, such as stocks, bonds, real estate (how’s the value of your home these days) , and life insurance. (These items relate to savings and not to day-to-day consumption expenses.) In other words, when the government thought it would be nice if “everyone should be able to own a home”, whether they could afford it or not, and looked the other way while credit applications were falsified causing the entire mortgage market to collapse, your retirement plans were probably severely altered as your net worth plummeted. Not a penny is covered in the CPI.

The CRI is suppose to include analysis of costs involving the following normal and customarily purchased goods and services:

Now that we understand more about the CPI and COLA, how, and when is COLA applied, and who benefits from the automatic adjustment in salaries and wages. Over the last couple of decades, most public workers (you know, those who work in local, state, and federal jobs), unions, and yes, even our elected representative benefited from COLA increases. Many of those in the private sector workplace INCLUDING the business owners do not. Most importantly, those who really need the inflationary adjustment are those living on Social Security and Veterans, both disabled and those living on retirement benefit (mostly those who retired as “enlisted military”).

The current crowd down occupying Wall Street, are protesting inequities in the Capitalistic system. They are quick to point out facts and figures to justify why they, in many instances, are protesting rather than working. Unfortunately the old axiom, “liars figure and figures lie”, still holds true.

One of the greatest myths being perpetuated is that the rich are getting richer while the poor are getting poorer. Unfortunately, most don’t have a clue as to what’s going on and many are simply being manipulated by those wanting to destroy what made America Great. The real crux of the protest is money… and the anger at those that have more than those doing the protesting…class envy and warfare is the consistent theme that prevails.

The New York Times called it “Soaring Poverty Casts Spotlight on ‘Lost Decade’” in a recent article. It is true that if we look at entry level wage earners, THE LOWER BRACKET, it is still based mainly on minimal wage earners. The MIDDLE CLASS BRACKET (those making $48,000 up to a little over $66,000), UPPER MIDDLE INCOME BRACKET (those making up to $100,000 to $135,000) , and those who the protester consider RICH. The class warfare being waged today has many Americans believing those in the RICH category got there by ill-gotten means, not by higher education, hard work, and putting capital at risk.

The problem with such numbers and those who simply throw them around is that no thought is given that the fact that people move in and out of the different brackets constantly. In an editorial in Investor’s Business Daily last year, Thomas Sowell made this powerful insightful comment about the issue (emphasis added below):

Only by focusing on the income brackets, instead of the actual people moving between those brackets, have the intelligentsia and political elite been able to verbally create a “problem” for which a “solution” is necessary (i.e. government interference in the free market). They have created a powerful vision of “classes” with “disparities” and “inequities” in income, caused by “barriers” created by “society” (the capitalistic, free-market system). “But the routine rise of millions of people out of the lowest brackets over time makes a mockery of the “barriers” assumed by many, if not most, of the intelligentsia” (this includes those in the news media).

With the knowledge that we will always need an entry level LOWER INCOME BRACKET as a place where those without education, critical skills, part time employees, and those just entering the job force will have a place to start, it is no wonder that the income in that bracket is fairly static. Most in that category have a desire to move up the income brackets, and most do.

One certainly can’t expect businesses to pay wages disproportionate to skill levels, or there simply would be no place for workers to get a starting job. The LOWER INCOME BRACKET, while not always a direct beneficiary to COLA adjustments, often gets a boost in the minimum wage rate, by legislation enacted by Congress. This by the way, is always seen later affecting the next COLA adjustment as the cost for minimum wage worker’s wages is reflected in the cost to harvest, manufacture, deliver, and service, for the marketplace.

The beauty of the free market and capitalistic system in general, is that the free movement between the income brackets is, in most cases, a result of hard work and entrepreneurial reward. In short, those believing in free enterprise, make their own COLA by improving their education, working longer hours, or creating new products and services. This is why people gravitate to the US for its opportunities.

The need for COLA, however, is to provide for those who have are held captive in a system where there are no alternatives and see their income diminished from government policies, natural disasters, fluctuating supplies, all beyond their control…those on fixed incomes. I believe this is part of the true “safety net” that a civil society should support.

Wednesday, we will look in depth at Veteran’s benefits and Social Security and how COLA should be applied, and how this will compare to the attitude inside the Beltway when it comes to the bureaucrats and union members.